Gold ended yesterday on the cusp of $1,900 — basically at the high end of its trading range going back to late 2020.

“The long-term price action for gold has been quite intriguing,” says our retirement and income specialist Zach Scheidt, “especially the way gold has been trading over the last three years…

“After a sharp rise in early 2020,” he says, “gold pulled back and then took some time to consolidate. (Which is the technical term for ‘go nowhere for a long time.’)

“Investors who were excited about gold — especially in light of high inflation — have been very disappointed,” says Zach. “Perversely, this is good for gold’s long-term prospects.

“The more people get frustrated with gold and move on to other things, the less crowded the gold trade becomes.

“But once gold starts breaking higher, there are more investors on the sidelines,” Zach says, waiting to jump back in, presumably. “The fear of missing out (or FOMO) is a powerful driver…

“If you look closely at the gold chart above” — with GLD as a proxy for gold’s price — “you’ll see gold is finally breaking higher,” he says.

“Which is exactly what you would expect during a period of high inflation. Individuals, as well as institutional investors, want to own hard assets when inflation picks up.

“In short, this helps investors preserve the spending power of their savings — or keep up with inflation,” he says.

“But what if you could do one better and actually beat inflation? Causing your real wealth to grow and leaving your family in an even better position, despite inflation?

“I’ve been looking closely at gold mining stocks: Many of these stocks provide the perfect way to turbocharge your investment in gold,” says Zach.

“When you invest in a gold miner you get two separate ways to benefit from higher gold prices,” he notes. “Think about the way a gold mining company operates…

“As gold prices move higher, mining companies can sell gold the mine produces at a higher price. That means more profit, which should drive stock prices higher.

“What many investors forget to consider is the balance sheet side of the equation,” he adds. “Not only do mining companies get to sell ounces of gold at a higher price, but they also hold reserves of gold that remain underground.

“Reserves typically represent many more ounces than the company will produce in any one year. So the value of these reserves should actually be much more important to investors than any one-year measure of a company’s production.

“One of the best ways to invest in gold mining is the VanEck Gold Miners ETF (GDX),” Zach says.

When you buy GDX shares, you buy a basket of blue chip gold mining companies that generate profit from the gold they sell, and also the large reserves of underground gold.

“A more speculative option is to buy shares of the VanEck Junior Gold Miners ETF (GDXJ). This fund holds smaller gold miners — many which are not profitable yet,” Zach says. “But rising gold prices might mean these smaller gold mining companies start to turn big profits.

“Bottom line, it’s important to have a balanced approach to protect your wealth from inflation,” Zach says, “and using traditional precious metals should help hedge your family’s wealth against inflation.”

[Ed. note: If you’re ready to buy precious metals, you should know about our partners at Hard Assets Alliance. We’ve been working with them for over a decade now.

More about Hard Assets Alliance and their precious metals service?

And there are even more benefits to working with the Hard Assets Alliance… But you get the idea.

So for anyone who wants to invest in precious metals, take a couple minutes today and open an account with Hard Assets Alliance… It’s totally FREE to get started. Check it out — you’ve got nothing to lose by doing so.

But please also be aware that our firm bought a stake in Hard Assets Alliance a few years ago to strengthen our business relationship. And we benefit when you do business with them.]

As we mentioned up top, gold popped yesterday while stocks tanked — with the SPX down 9% from its record high — allegedly because of Ukraine.

“The inventory of homes on the market remains woefully depleted,” remarks NAR’s Chief Economist Lawrence Yun, “and in fact is currently at an all-time low.” So it’s still a seller’s market… until the Fed starts raising rates, that is.

Yesterday, we raised the specter of a bank run in Canada as a result of Team Trudeau’s power trip…

We find no credible evidence that it’s happening today — not that mainstream outlets would report either way — but here’s a positive development: The Canadian Civil Liberties Association (CCLA) is taking the federal government to court.

“For all the peaceful and disruptive protests in Canada’s history… never before has the government declared a national emergency under the Emergencies Act, and with that, given itself the enormous powers to bypass the normal democratic process,” says CCLA’s executive director Noa Mendelsohn Aviv.

“A legal standard… has not been met,” she concludes. Godspeed, right?

And speaking of Trudeau’s team of power trippers…

A few years ago, our own Jim Rickards shared a debate stage with Canada’s Deputy Prime Minister and Minister of Finance Chrystia Freeland.

She’s been instrumental in kicking a** and taking names (not necessarily in that order). “You’ve been warned,” she swaggered a few days ago, threatening to freeze demonstrators’ Canadian bank accounts, vehicle insurance, mortgages and more.

Here’s what Jim had to say yesterday…

A bipartisan group of U.S. senators introduced legislation Wednesday to examine the impact of El Salvador’s legal tender (Bitcoin) on the U.S. economy.

Their Accountability for Cryptocurrency in El Salvador (ACES) Act — oh, heavens — would give the State Department 60 days to produce a report and to “mitigate potential risks to the U.S. financial system.”

As for El Salvador’s Bitcoin Law, the Senators claim: “This new policy has the potential to weaken U.S. sanctions policy, empowering [malignant] actors like China and organized criminal organizations.” 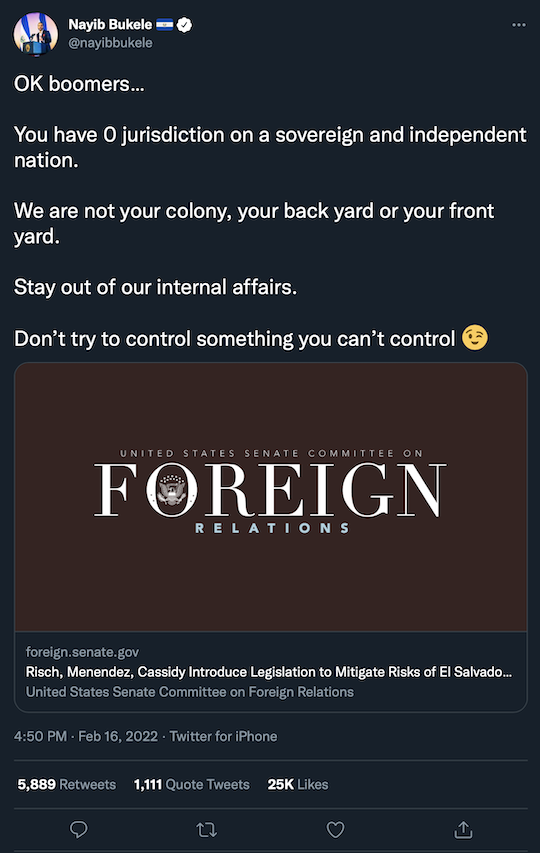 We can say this for President Bukele, he certainly has a command of English idioms — OK boomers? — and we *heart* the winky face emoji.

A car-carrying ship — the Felicity Ace — is adrift and on fire off the coast of the Azores.

Or as one quick-witted social mediaite comments… 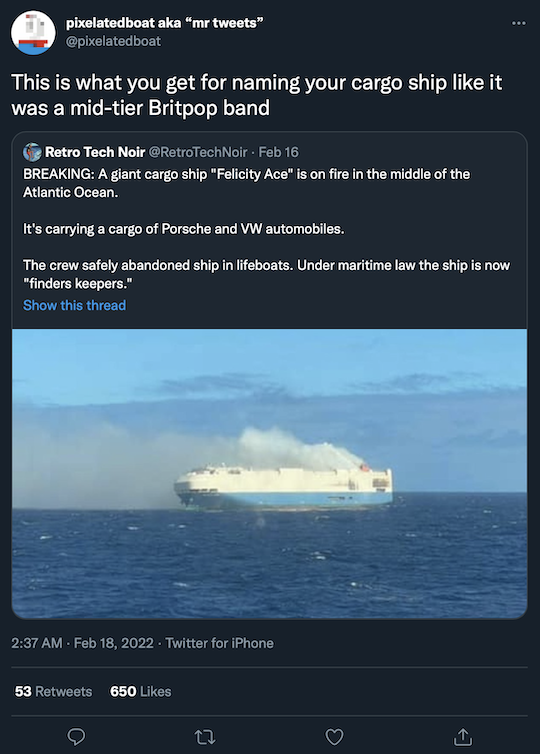 The 200-meter vessel embarked from Emden, Germany, to the Rhode Island port of Davisville with a cargo of Porsches, Bentleys, Audis and Volkswagens. But when a fire broke out on a cargo deck, the crew of 22 boarded lifeboats and had to be rescued by a Greek-owned tanker.

While the crew is safe… the vehicles? Not so much. The “VW Group estimat[es] the total number of vehicles on board to be close to 4,000,” The Drive reports. No word on estimated damages.

“Sorry to hear of Mr. O’Rourke’s passing,” a reader says. “His musings were amusing and informative. RIP.

“I’m dating myself, but P.J. O’Rourke’s pieces in The Harvard Lampoon from the ’70s were laugh-out-loud funny. They tended to be longer than the other material in the magazine, but the sophisticated humor occasionally had me audibly cracking up on the commuter train when I was just out of college.

“Different subject, but it seems the lies (and desperation of their messaging) coming from the self-proclaimed elites are developing an almost panicked feel to them these days. Most people, with a few exceptions like your pro-Trudeau reader today, totally dismiss them by now. Listening to government spokespeople is kind of like the parodies in O’Rourke’s old Harvard Lampoon. And that’s the same degree of credibility they deserve.

“Oh, and by the way, I haven’t watched a minute of the Olympics. I despise NBC’s messaging, and avoid it because it’s easy to do by not tuning in. And I have no interest this year anyway. Not sure if China is a major contributor to my apathy, or realization that I just don’t care.

“Thanks for your work!”

“To the person who finds curling uninteresting” — who would be your editor today — “watch some on TV and keep watching.

“I felt the same at first, but I find it strangely fascinating and interesting after a while.”

You all take care, have a relaxing weekend… By the way, The 5’s off on Presidents’ Day, but we’ll be back with more on Tuesday.