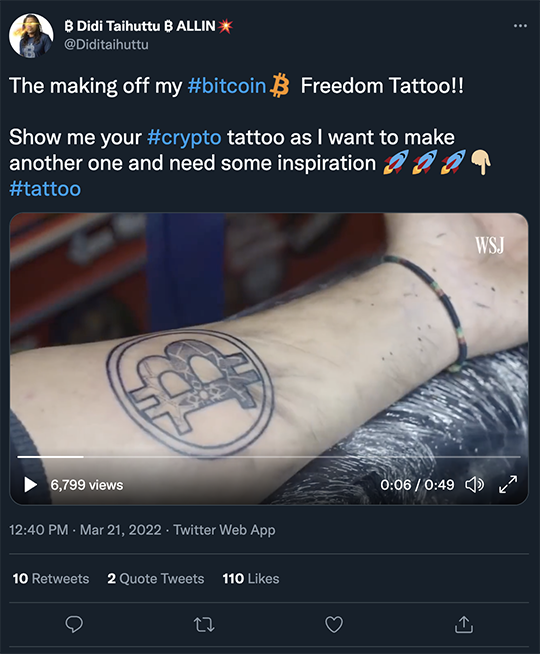 It wasn’t always that way; in fact, James once told his Twitter followers he thought Bitcoin was a “scam.” However, by 2013, James was convinced: “Bitcoin solves the problems of human currency.” Think about it…

— “But even more recently I sold every single Bitcoin I owned,” says James. “I still think Bitcoin will go up,” he clarifies. “Maybe even more than most coins. But it’s not a buy for me.

“Here’s why I’m saying goodbye to Bitcoin… I can no longer calculate the risk,” he says. “The rewards are there. That’s not the issue. Many people get rich investing and will continue to do so.

“But when I make an investment, the one thing I want to make sure of is managing my risk. With crypto now,” says James, “I need to see it being used by people [because] it makes their lives better. But nobody really needs to use Bitcoin…

“What do people use Bitcoin for?” James queries. “It’s not really used that much as a currency because it’s so volatile. (Yes, there are use cases like aid for Ukraine.) But in general, I don’t see people paying their hospital bills in Bitcoin.”

“Ninety percent of NFTs, the metaverse, decentralized finance exchanges, etc., are built on top of Ethereum’s protocol,” James notes. “In order to use any of these thousands of projects, you need Ethereum.”

And as for its environmental impact, James adds: “Ethereum” — as well as the tokens it powers — “is moving to something called ‘proof of stake,’ which requires a fraction of the electricity needed to mine Bitcoin.

“Right now, I’m [investing] in Ethereum,” James summarizes. “And I’m in many other coins growing fast in the decentralized finance space and other industries.

“They have real uses, real users, huge numbers of transactions per day. And I also expect their use in the real world (not just in the crypto world) to explode.

“I own more crypto now than I ever did,” James admits. But today, he’s investing in coins that…

“Some of these coins will have the returns Bitcoin did between 2009 and today,” James concludes. “From an opportunity-cost perspective, I think it’s better to spread my crypto investments around to Ethereum and other Ethereum-powered coins.”

The sale of new homes in the U.S. declined — down 2% in February — according to the Commerce Department. This marks the second month of lower-than-expected new home sales. (But to be fair, January and February are not exactly prime home-buying months.)

To wit, our income-and-retirement specialist Zach Scheidt comments: “Shares of many homebuilder stocks have pulled back sharply over the last few weeks.

“And it’s easy to understand why.” In two words? Interest rates. “Higher rates have naturally caused mortgages to become more expensive,” Zach says. “But even though higher mortgage rates are making it more difficult for some buyers to afford new homes, there’s no denying that the housing market is still extremely tight.

“Inventories of homes for sale remain at the lowest levels in recent history, and multiple buyers are bidding for just about every home that goes on the market.

“This dynamic still leaves homebuilders in a healthy spot,” Zach says, “because they can build new housing developments that will almost certainly be sold as quickly as the builders can finish.

“Even though home prices may not rise as quickly as before,” Zach adds, “here’s why I think this area of the market is still set for an incredible rebound…

“So with strong demand and tight supply, there’s very little risk of falling home prices. In other words, this is not a situation like the one in 2007.

“We may see a healthy moderation of home prices in light of inflation,” Zach says, “but some stability for home prices would be healthy.

“Add it all up and you’ve still got a healthy environment for homebuilders — especially large companies that can negotiate the delivery of raw materials and those that can attract labor.”

For at least five years now, The 5’s been following the problem of electronic waste (e-waste), which includes anything with a plug or a battery — toasters, alarm clocks, cellphones, laptops and more — winding up in landfills. (To say nothing of the tons of silver and gold found in Switzerland’s wastewater. Eww.)

According to a 2020 study backed by the United Nations: “This means that iron, copper, gold and other high-value, recoverable materials conservatively valued at US$57 billion… were mostly dumped or burned rather than being collected for treatment and reuse in 2019.”

And just 17.4% of e-waste metals were collected or recycled in 2019. (Imagine how that percentage inevitably plunged under global pandemic lockdowns!)

A solution? “The Royal Mint has announced it is building a plant… [to] recover precious metals from discarded electronic devices,” says an article at WalesOnline, using “new technology created by Canadian-based Excir.” 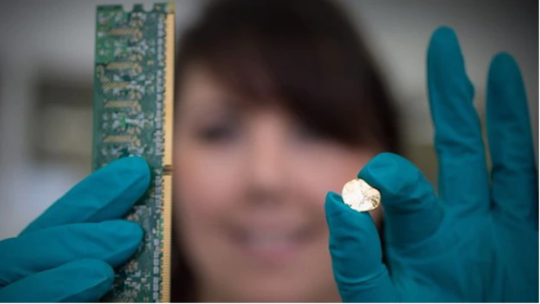 The Royal Mint is scheduled to break ground on the Wales-based plant this month, and it should be fully operational in 2023, “process[ing] up to 90 tonnes of U.K.-sourced circuit boards per week.”

The mint’s CEO Anne Jessopp says: “Our investment in a new plant will… provide the U.K. with a much-needed domestic solution to the growing problem of electronic waste.”

Here stateside, check out responsible ways to recycle your electronics…

“I sympathize with the owner and employees at the Chicago restaurant Russian Tea Time,” says a warmhearted reader.

“Obviously, the restaurant has nothing to do with events taking place in Ukraine due to the senseless war being waged by Putin. It’s very reminiscent of the time when french fries were temporarily renamed ‘freedom fries.’

“My suggestion for the people taking heat is to take advantage of current public sentiment by renaming their establishment Ukrainian Tea Time. This is doubly sensible since the founder is Ukrainian as are many employees.

“This would not only eliminate the senseless criticism they are taking, but would probably increase business due to current public sentiment.”

The 5: Point taken. But it seems un-American. The Chicago landmark shouldn’t have to placate ignorant halfwits.

Although it seems another American landmark — the Kennedy Center in D.C. — has done just that, quietly renaming its Russian Lounge, which underwent a $5 million Russo-centric remodel in 2011 via a generous donation from patron Vladimir Potanin. (Did you do a double take?) 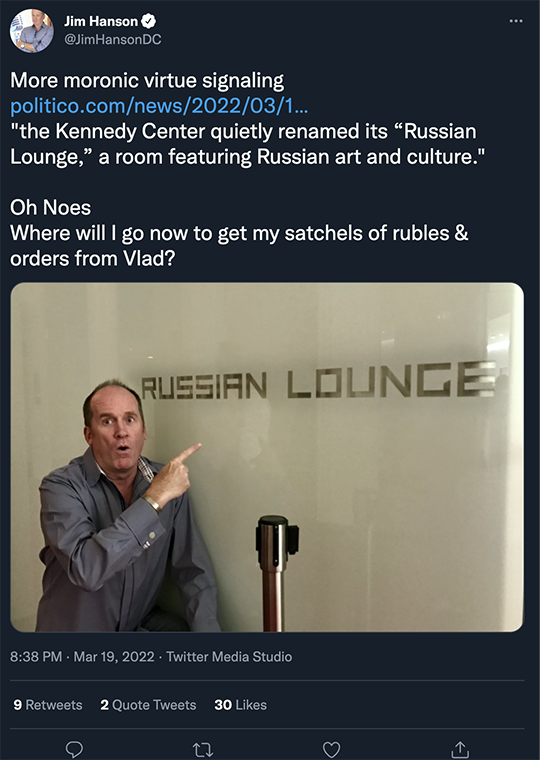 Although the Kennedy Center’s spokeswoman didn’t exactly admit they caved to general dumba**ery; instead, she says pithily: “The naming period for the lounge has now ended.”

But Kennedy Center Trustee Paolo Zampolli has suggested changing the name to “Ukraine Lounge.” According to Politico: “He also offered to pay for the remodel.”

[Heh… How far off do you think the Ukrainian aesthetic is from the Russian? Just sayin’.]

“I want to know how I can get paid for knowing so little,” a reader writes regarding recent comments from economist Teresa Ghilarducci.

“Does she realize that all those vegetables came to her table in a truck that runs on diesel? Does she understand that the toothbrush she used this morning and the fertilizer for her lentils came from an oil well?

“Has she ever tried raising lentils? I have. It’s not that easy. Especially without a tractor, which — surprise, surprise — runs on gasoline.

“Somehow we have leaders who think we are stupid. ‘I’m not a crook’… ‘Read my lips’… I smoked but didn’t inhale… ‘You can keep your doctor.’ Ugh.”

Or how about this one? A nationwide fleet of electric vehicles won’t cripple the U.S. electrical grid. (More on that tomorrow.)

In the interim, reader: “I feel your pain.”