How the Pros Will Beat Inflation

Quietly, Bitcoin is back in the green for the year 2022. 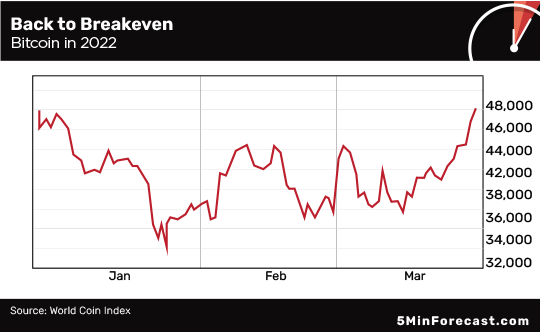 Which is more than you can say for the Nasdaq.

As you might recall, a narrative started taking hold in the mainstream last fall — when cryptocurrencies and tech stocks had both peaked and were moving sideways with great volatility.

The thinking was that crypto had attracted a critical mass of attention from institutional and professional investors. And those investors viewed crypto as risk assets, much like tech stocks. If tech stocks were unloved, crypto would likewise struggle.

Result? “By and large,” says our crypto evangelist James Altucher, “markets have treated crypto like a juiced-up tech stock.

“This is despite the fact that crypto has properties that its advocates believe make it a great anti-inflation investment,” James points out.

“Bitcoin for example, has a limited quantity, meaning that unlike with the dollar, there’s a set amount that will be mined. Ethereum takes things a step further, by actively burning (i.e., destroying) a variable number of coins on a daily basis. This has the effect of shrinking the total supply of Ethereum over time.”

[Reminder: James recently parted ways with Bitcoin, but not because he thinks Bitcoin’s best days are over. It’s just that he sees better days ahead for other smaller cryptos that have the same potential Bitcoin did when it first caught his eye in 2013. See here.]

But with crypto rebounding stronger than tech stocks now, it appears “these inflation-resistant properties seem to have caught the eye of some big investors,” James goes on.

As evidence, James points us to news that Bridgewater Associates — the biggest hedge fund out there with over $150 billion in assets under management — has made a small investment in another fund focused on crypto.

Alas, that’s about the extent of the detail CoinDesk was able to confirm. But even that squib of information is significant.

“The move represents an abrupt turnaround for Bridgewater,” James points out. “Founder and Chief Investment Officer Ray Dalio has previously gone on record as critical of digital assets. If true, an investment from Bridgewater would represent a small vote of confidence from one of the most respected investors in the world.

“Although Bridgewater’s investment might be small, this represents the start,” says James. “Bridgewater is likely testing the waters with this investment before deploying larger, more meaningful investments into the asset class.

“Even a small vote of confidence from an elite fund like Bridgewater opens the door for similar moves by more conservative investors who are unwilling to go out on a limb and be early to this market.

“The timing of this also represents a potential vote of confidence in the potential of crypto to produce strong returns in an inflationary environment.”

Which is nice. On the other hand, if your aim is to not only stay ahead of inflation but achieve life-changing gains via crypto… James has something you need to check out right away. Give it a look now, because this presentation goes offline tomorrow night at midnight.

Whether it’s progress in Russia-Ukraine negotiations, or something else, stocks in both Europe and North America are in rally mode.

And now a report from the front lines of financial warfare: How’s that Western campaign to crash the ruble going?

Let’s check out a one-year chart of the ruble versus the U.S. 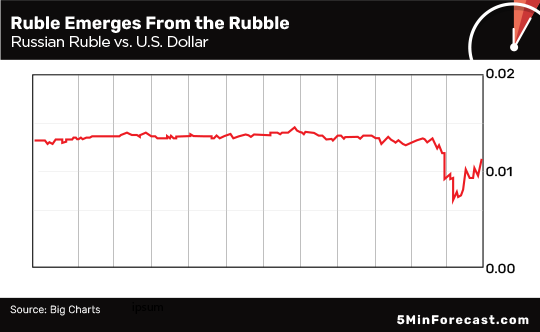 “At this point,” observes our macro maven Jim Rickards, “it’s helpful to step back and ask if the sanctions are working as intended.

“There is extensive pain being inflicted on the Russian people. The pain on the American people has begun, but is about to get much worse.

“But what about the strategic aims? Here, the sanctions are a complete failure,” Jim avers.

Reminder: The European Union still imports natural gas from Russia because, well, it’s hard to replace 40% of your gas supply with the flip of a switch.

“This mystified many. If Russia needs dollars (they do), why be paid in rubles? The answer is that the only way for Europe to get rubles quickly is to buy them from the Central Bank of Russia using dollars.

“Under Putin’s plan, Russia still gets the dollars, still sells oil and natural gas, but he has the added benefit of making the ruble stronger because Europe has to buy them to pay for the energy exports.

“This is how judo works. You use your enemy’s power against him by avoiding the main attack and turning the tables. Putin’s a judo expert in real life and he just demonstrated that he can practice it in economic warfare.”

Bottom line: “The West will now be engaged in propping up the ruble after they did so much to destroy it.”

As long as we mentioned tech stocks up top… the sector is finally catching the eye of our cautious, value-conscious Zach Scheidt.

He wisely warned his readers away from highflying tech names throughout last year — and not just because they didn’t pay dividends. “Many of these companies hit unreasonable prices. They were worth billions of dollars on paper but without the underlying business to back up these valuations.”

“There are plenty of other examples,” Zach says. “But the point is now that these speculative tech stocks are trading significantly lower, they’re more attractive buyout candidates for blue chip tech companies.

“The established names can bring on their niche technology and sell it to existing customers turning a profit from technology that currently isn’t making any money.”

Next to a solid dividend payer, there’s nothing Zach likes more than buyout bait. He’s researching names right now, but if you want to do your own legwork, you can look at the holdings in the ARK Innovation ETF (ARKK) — the very collection of growth stocks Zach wisely warned his readers off of last year.

“Hard to know what was going through Joe’s mind when he called for Putin’s ouster,” a reader reacts to yesterday’s edition.

“I would hazard a guess that the thought If Trump could/can say outrageous, egregious bull—-, why can’t I? has occurred to him on more than one occasion; probably other politicians as well.”

The 5: Good point. Rush Limbaugh conveniently forgot his mantra about how “words mean things” during Trumptime.

We on the other hand found Trump’s imprecision with language frustrating — examples from a single day here — and we feel the same way about the current occupant of the office. Only now it’s the mainstream making excuses. 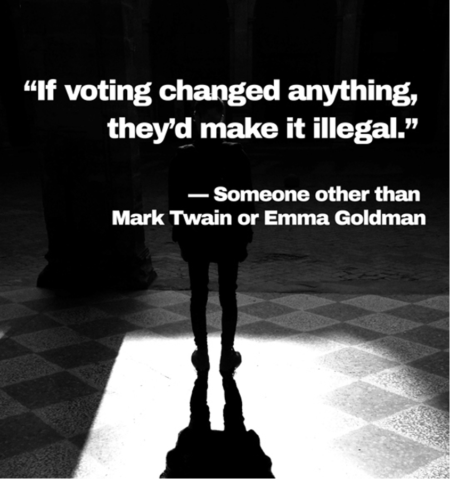 “For the record, I think Joe Biden got it right,” a reader counters.

“Traditionally, it is inappropriate for one country’s leader to recommend publicly the overthrow of another, even if you’re really thinking about it.

“However, once that leader sends troops into another sovereign country and starts a war, all bets are off. We should shout this from the rooftops, not apologize for it.

“We try not to tell other parents how to raise their kids until their kid bullies ours. We need to stop letting Putin get away with his threats. I know everyone is threatened by nuclear war. But if we assisted Ukraine, in Ukraine’s territory, it is not a war against Russian sovereignty. Just make sure to stay out of their borders. He can’t claim self-defense when we don’t attack the self!”

When Biden tried to weasel his way out of his threats yesterday, albeit with assistance… 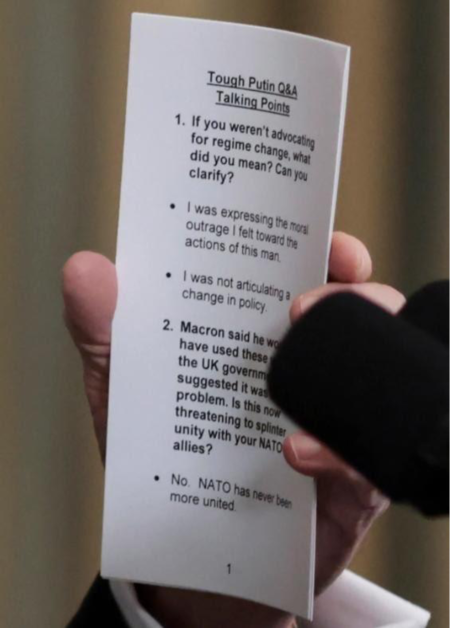 … he was also asked about his earlier “gaffe” in Europe when he told members of the 82nd Airborne that Ukrainians were “stepping up” their resistance. “You’re going to see when you’re there,” he said — suggesting U.S. troops would be deployed in Ukraine.

Asked for clarification, a White House official told Politico, “There are Ukrainian soldiers in Poland interacting on a regular basis with U.S. troops, and that’s what the president was referring to.”

Which clarified exactly nothing — while upping the stakes. Enormously… 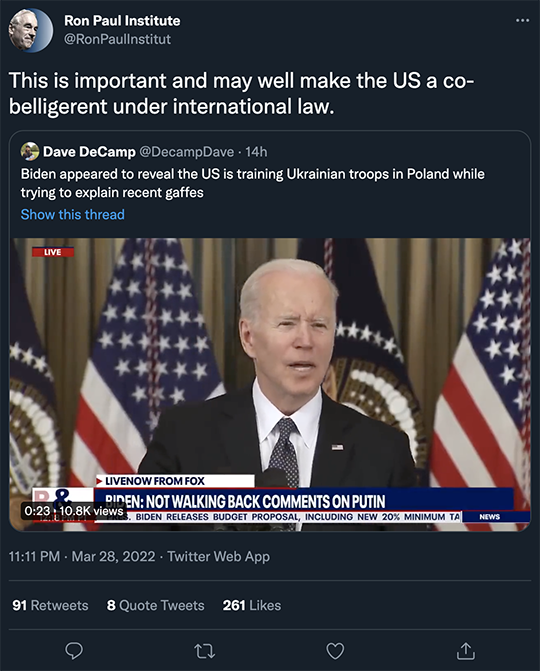 And that’s even before any NATO troops enter Ukrainian territory.

Up to this point, Biden has been scrupulous — and we’ve acknowledged as much — about making sure America is not a co-belligerent.

That’s why he’s smacked down all discussion about a no-fly zone. Ditto for the notion of sending Polish planes to Ukraine. As Pentagon spokesman John Kirby said, the latter move “could result in significant Russian reaction that might increase the prospects of a military escalation with NATO.”

Washington has generated too many “significant Russian reactions” as it is…

After more than a week, one reader has a final thought about our periodic email blitzes…

“I’m not sure if most of your readers are so focused on your particular emails that they haven’t noticed that about 95% of the stuff in their inboxes is some sort of junk (please excuse my catch-all categorization). And yes, I have a robust spam filter.

“Instead of whining, might I suggest an alternative approach? Ignore the damn things if you don’t like them!

“I realize whining has become ingrained in our culture, but ignoring them actually is quite easy and painless. I’m an equal opportunity ignorer.”

The 5: As long as you don’t unsubscribe!

P.S. The first quarter of 2022 is nearly over… but it’s not too late to get in on many of James Altucher’s favorite crypto picks for the year.

He’s got nine total… and the best is yet to come for many of them. See for yourself right here — and watch it soon because the link goes dead tomorrow night at midnight.