“During the pandemic, there was an ‘exodus’ of people, leaving major cities like San Francisco, NYC, LA and Chicago,” says iconoclast investor James Altucher. “I know because I was one of them!”

Recall in August 2020, James wrote a piece about NYC that went viral. His premise? The pandemic had shattered the Big Apple in a way even 9/11 hadn’t. For his trouble, James got pushback from an A-list comedian who wrote a rah-rah Op-Ed for The New York Times… 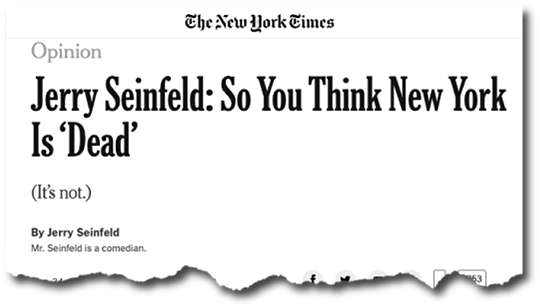 But back to James’ sojourn: “My family and I packed up and left our cramped New York City condo, eventually settling in a much larger space right outside of Atlanta.” Now James contemplates if a return to NYC is in the cards — like so many of his compatriots.

“I am trying to gauge exactly how many people ‘escaped’ the urban jungle,” James says, “but the data is mixed.

“From what I’ve been able to find on my own…

Where have these former city-dwellers moved? “Mainly the South and Sunbelt states,” James says. Lower taxes, warmer weather and “fewer COVID restrictions” might have played a role, he says. 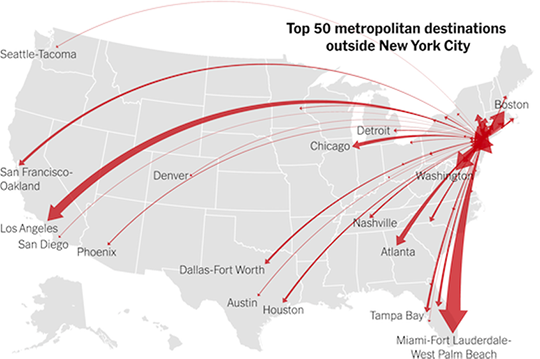 “With this shift out of larger cities came a shift in where money is being spent,” he adds. “This is interesting from an investment standpoint, and it’s not something I’ve seen other financial outlets cover much…

“Blackstone has been quietly buying houses and apartments in middle-income areas all across the South and Sunbelt states.

“In the third quarter of 2021, for instance, 43% of all home sales in metro Atlanta were bought by investors. Most of those ‘investors’ were just one investor: Blackstone.

“The only media coverage I’ve seen about this is when the company recently made news, buying up to 12,000 rental units in Florida, Georgia, Tennessee and North Carolina,” says James.

To wit, in the city of Charlotte… 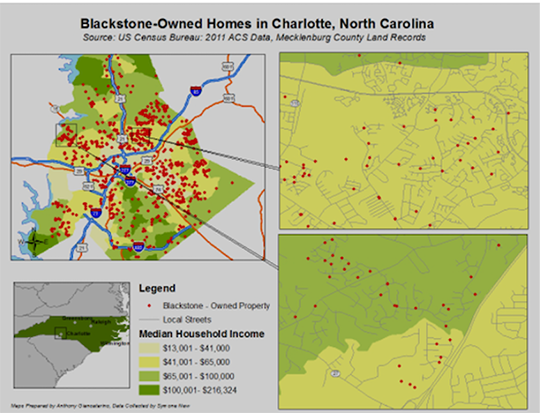 As an income-generating stock, James says: “Blackstone pays a 3.2% dividend yield. But Blackstone is far from the best opportunity…

“The best way to gain broad exposure is real estate investment trusts (REITs),” James says. “These are stocks that own properties and pay out 90% of their profits as dividends.

“So I like REITs as an investment because you get to make money in not one, but TWO ways,” he says, “via the dividend — and as the values of properties go up — the share price too.

James concludes, saying: “There’s still a big unknown among former New Yorkers and other city folk: Will we ever return? In the meantime, there are many ways to play this ongoing migration.”

[Ed. note: James Altucher is part of another ‘great migration’ too — out of the unscrupulous world of traditional finance and into decentralized finance… where he anticipates banking without banks, stock trading without brokers or exchanges, insurance without insurance companies and more.

Of course, cryptocurrency — and the blockchain technology on which it’s built — plays a unique role.

And it’s not too late to get in on many of James’ favorite crypto picks for 2022. Don’t wait to view his summit on next-generation crypto: The link expires Thursday, March 31, at midnight.] 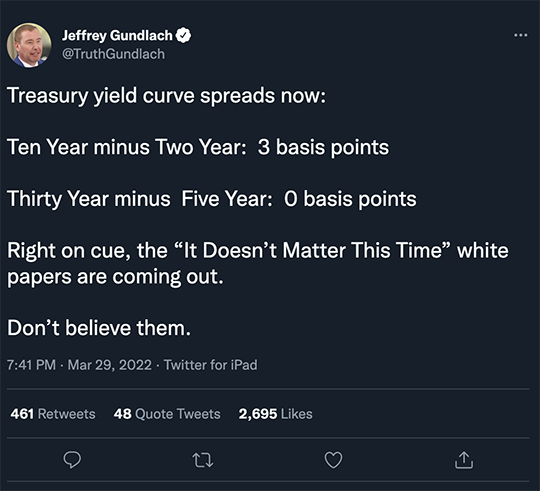 “The knee-jerk reaction on Wall Street was to sell homebuilder stocks, driving prices for these investments lower,” he says, evidenced by the iShares U.S. Home Construction ETF (ITB), a basket of homebuilder investments. 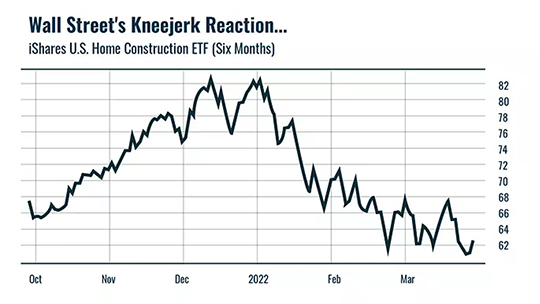 “Instead of selling these stocks and looking elsewhere for opportunity,” says Zach, “I’d like to ask why new home sales were soft.

“A weak new home sales report seems like a bad thing for the industry,” Zach says, “but there’s a whole lot more to understand…

“The reason fewer homes were sold? Low inventory,” he adds. Meaning, it’s not that homebuying demand wasn’t — and isn’t — there; rather, supply has been historically low. “There simply aren’t enough homes available to buy.”

But what about mortgage interest rates? “The truth is that may be an issue down the road, but for now, there’s way too much demand,” he says. “Meanwhile, supply chain challenges do pose a temporary challenge for homebuilders,” Zach concedes.

Shipping snarls, however, are getting untangled. “Slowly and steadily, goods are getting to the places they’re supposed to go,” he says. “And recent economic reports show more workers back in the labor force, helping to ease the tight job market

“So when you look past the headlines, there are actually a lot of reasons to like these investments for your retirement account,” says Zach. “With a word of caution…

“Even though I like this area of the market and see a lot of potential for homebuilder stocks, Wall Street still isn’t keen on the area — at least not yet.

“In today’s choppy market, it’s not a good idea to buy aggressively until you start to see the trend turn in your favor,” Zach says. “Instead of jumping in with both feet, I’d suggest… buying a quarter (or even less) of the ultimate position you want to own.

“You could start with shares of ITB and then do some research on the individual companies included in this ETF. Then once these stocks start building momentum, you can put more of your capital to work.

“Be sure to keep an eye on this sector,” Zach concludes, “because by the time you start hearing good news about housing stocks, these stocks will have already traded sharply higher.”

“[Earlier this month] during a meeting at the White House, CEO Andrew Holland of the Fusion Industry Association shared an interesting statistic,” says our tech investor Ray Blanco.

“Roughly 83% of the companies his group represents expect to see commercial fusion power come online by the 2030s or before — which is a bold prediction for a power source with 70 years of failure behind it,” Ray notes.

“Unfortunately, nuclear fusion technology has been just out of reach. The difficulty involved in producing usable electricity resulting from the fusion of atoms has proven too tall an order for nuclear scientists so far.

“Governments, national laboratories and academia have all come to terms that containing 100 million-degree temperatures using magnets or lasers is not the most straightforward proposition,” says Ray.

“But with enough time and research, anything’s possible… and reproducing the power of the sun to solve the world’s energy woes is an attractive prospect.”

And from a financial angle, Mr. Holland adds: “We are an industry backed by private capital, venture capital.” (Including $3 billion in venture capital raised in 2021 alone.) “There is a limited time frame that investors have.”

It’s happening: For about a month now, The 5’s anticipated global fertilizer shortages brought on by Russia invading Ukraine. We noted — in addition to the natural gas that makes ammonia — Russia also produces huge quantities of other fertilizer ingredients.

Then on Friday, “a gauge of prices for the nitrogen fertilizer ammonia… surged 43% to $1,625 per metric ton,” says Bloomberg, “a record for the 29-year-old index.” 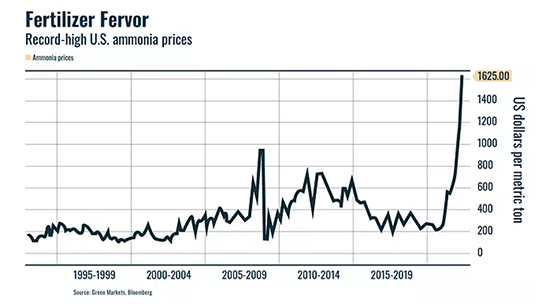 And as we move into springtime, “if Ukrainian farmers aren’t able to get their crops in the ground” — much less fertilize them — “we’re looking at an entire year without a quarter of the world’s wheat supply,” says CEO Robb MacKie of the American Bakers Association.

With the Middle East being most affected since 29% of the region’s wheat imports come from Russia and Ukraine.

The Hill notes: “Millions of people in Afghanistan, Lebanon, Iraq, Yemen and other Middle Eastern nations were already struggling with food insecurity before Russia’s invasion disrupted their top grain supplier.”

Indeed, famine-level food scarcity in the Middle East is a humanitarian crisis in the making.

We think “read the room” got lost in translation… 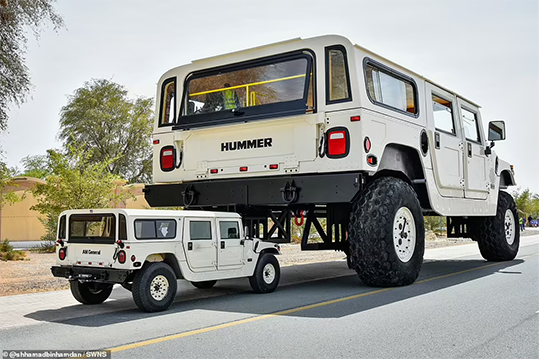 “A closer look [at] moving World’s Biggest Hummer!” says the sheik’s braggy ’Gram account. “It is drivable and running with four diesel engines.” (In case you’re wondering — and we know you are — the average price for a gallon of diesel fuel is $5.124 in the U.S. today. Sheesh.)

The 20x46x21.6-foot Hummer can reach a top speed of 20 mph and has a set of stairs leading to a second story, and is tricked out with a half-bath. (A bedroom and kitchen will be added later.)

But the sheik won’t regularly hog two-lane highways with this monument to excess; instead it will be exhibited alongside his other 718 four-wheel drive vehicles at the Sharjah Off Road History Museum in UAE.

Just a sweetheart of a guy…

Take care, and we’ll be back tomorrow.

P.S. Once more, we direct your attention to this limited-time offer. Right now, James Altucher sees an opportunity setting up for early-stage investors. To find out if his service is the right fit for you, watch James’ message before it closes on Thursday, March 31, at midnight.