“An Unprecedented Level of Experimentation”

According to the Labor Department, the consumer price index, which measures a basket of goods and services, was up 1.2% month over month in March… or 8.5% year over year.

It’s the highest reading since Reagan occupied the Oval Office in 1981, and the movie Rollover — ironically, about a fictionalized economic crisis, starring Jane Fonda and Kris Kristofferson — was No. 1 at the box office. 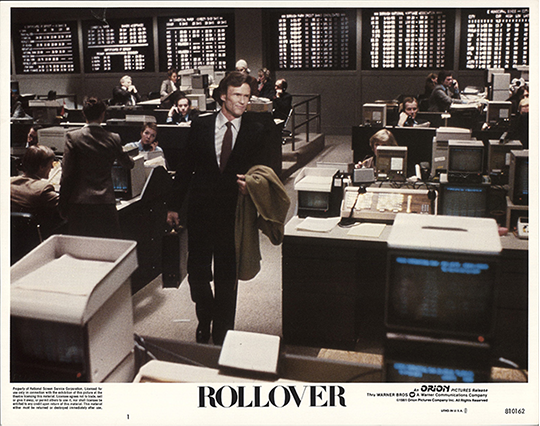 A very brief synopsis of the movie? After an Arab oil organization concocts a plan to destroy the world’s economy, “the globe is gripped by panic and rioting as people discover all of their money is now worthless,” Wikipedia says.

For some real-world context, here’s how runaway inflation is affecting Americans’ spending…

The “good” news: Wages in the U.S. are up 5.6% year over year. Yay? Not exactly keeping up with inflation, which, according to alternate data from ShadowStats, comes in at a scorching 16.77%. 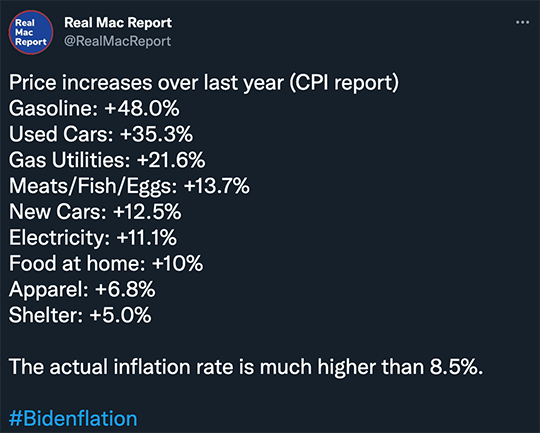 “The last decade of money policy in America, going from 2008… has been totally different from previous eras,” says business journalist Christopher Leonard who recently sat down with The 5’s founding editor Addison Wiggin for an interview at The Wiggin Sessions.

“We’re in a different world and not enough people are talking about it and appreciating it. And that’s exactly why I wrote the book [Lords of Easy Money: How the Federal Reserve Broke the American Economy].

“Let’s rewind,” he says. “We created the Federal Reserve in 1913 because we needed a currency… There were literally thousands of currencies in the U.S. in the late 1800s, early 1900s. So we create the Fed to, in turn, to create what we call the… Federal Reserve note.

“When you create a currency,” Leonard says, “one of the biggest challenges is imposing some discipline upon that currency.

“We did that for a long time by hooking our currency to gold and the gold standard.” (Mind you, and this is probably an unpopular opinion among our readership, Mr. Leonard says: “I argue that the gold standard was tough and unworkable and crazy in its way.”)

“For better or for worse,” he continues, “whether you think the gold standard’s terrible or great, we abandoned it in 1971, and then we tried to replace the discipline of gold with the discipline of a committee.

“The FOMC… members are appointed by the president, approved by the Senate, but then they serve these long terms,” he says.

“I think the idea here is for the [FOMC]… to have the discipline to make the hard choices necessary to maintain a healthy currency.

“To expand the money supply as the economy needs, but then tighten the money supply when there’s too much easy money and… the system overheats through reckless bank speculation or inflation.

“It’s the job of the FOMC to manage this process,” says Leonard. “And the Fed… over the decades, they did a pretty stable job of managing the currency.

“But when I talk about an unprecedented level of experimentation, I really mean that,” he adds.

In 2008–2009: Then Fed chair “Ben Bernanke pushed the Fed to be extremely aggressive,” Leonard notes.

“Short-term fed funds rates… had gotten low in the past. [They] had brushed up against the level of zero, but the Fed always raised that interest rate again,” he says. “But between 2008 and 2016, the Fed kept that rate pinned at zero. That’s seven years. That… never happened before.

“At the same time, the Fed [was] pumping… money into the banking system through quantitative easing, dramatically increasing the monetary base.

“In other words, the Fed in 2008… pushed down this very experimental path of keeping interest rates at zero” and “quantitative easing, which is just pumping trillions of dollars into the banking system.”

It’s a system the current Fed chair is stuck with: “Jay Powell inherited the process of trying to, quote, ‘normalize monetary policy.’” (Psst… By not keeping rates at zero and the money printer whirring.) “And the entire time,” Leonard says, “the FOMC… acknowledges that we can’t keep doing this forever.

“We’re creating imbalances and distortions in the market,” he says. (If you’ve been a 5 Min. reader for any length of time, you know that’s a theme we’ve covered exhaustively.)

“[They] have got to start raising interest rates above zero to a historically normal rate of even 3% or 4%,” says Leonard. “At the same time, we need to start withdrawing some of this high-powered money from the Wall Street banking system.

“Jay Powell [walked] onto the job in 2018… trying to make things normal again, trying to raise interest rates to a level that’s not just like normal, but even low by historical standards,” Leonard recalls.

“That was one of the most fascinating episodes in history, looking at what happened when the Fed really tried to normalize… in a concentrated way in 2018,” he says. “It caused the markets to short-circuit and fall.

The real question: Will leadership at the Fed have the guts to “normalize” (particularly given the pandemic, etc.)?

“Since the late Greenspan era and accelerated under the Bernanke era,” Mr. Leonard says, “you really see a domination… by Ph.D. economists using these economic models to justify their own policies.”

More specifically, Leonard cites “2012, when the Fed did its largest round of quantitative easing in history… based on these forecasts. The Fed’s own economists… turned out to be catastrophically wrong.”

And Leonard continues to see Fed leaders who are “resistant to data or information that [runs] counter” to their models. “If I’m being blunt, there’s a dominance of the Ph.D. economist groupthink,” he says.

[Ed. note: For more where that came from, you can watch the complete interview with Christopher Leonard — award-winning author and journalist whose work has been featured at The Wall Street Journal, Fortune and The New York Times — follow this link to Will the Fed “Nuke the Economy”?]

The reason for the risk-on environment, according to a headline at CNBC: “Stocks rebound on hope inflation is peaking.” Meh, it can’t get any worse?

The major economic number of the day — the NFIB Small Business Optimism Index — dropped to 93.2 in March from 95.7 in February. It’s the lowest reading since the bad ol’ days of April 2020, and around two points lower than what economists expected.

As for top-of-mind worries among small-business owners… 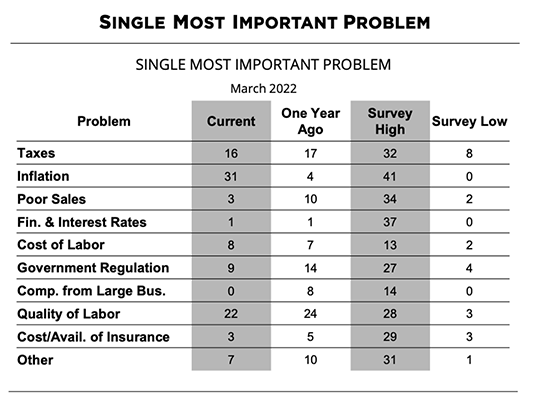 For a little less doom and gloom today, we give the floor to our retirement-and-income specialist Zach Scheidt following up on Friday’s episode… with three more stocks that should profit from the strong-dollar trend.

“Now that the U.S. dollar is stronger, American companies that sell primarily to U.S. customers have an advantage,” Zach says.

“One of my favorite American investment plays is Invitation Homes (INVH),” he says. “This real estate investment trust (or REIT) has invested in more than 80,000 homes located in some thriving U.S. cities.

“And with inflation driving the prices of homes higher, it works in INVH investors’ favor because the value of the company’s portfolio continues to rise. Investors benefit both from the company’s cash flow as well as from the rising value of American real estate.

“Next,” Zach says, “higher rates and a strong dollar set up a perfect opportunity for traditional banks to lend to individual and corporate customers while charging attractive interest rates.

“Regions Financial (RF) has a footprint in Texas as well as other areas of the South and Midwest. With a full suite of products and services for both businesses and individuals, RF should profit in several ways.

“Shares have held up much better than for many of the larger investment banks recently. And RF currently pays a 3.2% dividend yield, helping investors collect more income while waiting for the stock to trade higher.

“Last, although travel and leisure stocks have been on a roller coaster lately,” Zach says, “I’d still suggest taking a look at Southwest Airlines (LUV).

“This summer, I expect American families to spend a lot on travel, making up for lost time and experiences over the past two years. Since the company operates almost exclusively in the U.S.,” Zach says, “this gives LUV an advantage over international airlines.” Again, that strong U.S. dollar…

“One thing to note: Higher oil prices have weighed on airline stocks. But at this point, we may have seen the worst (at least from an investment perspective).”

Zach concludes: “As the U.S. dollar continues to trade higher, consider adding these all-American success stories to your investment account.”

Today, we retrace our steps to the woodlands of Dent’s Run, a remote area northeast of Pittsburgh, PA… where father-son duo Dennis and Kem Parada of Finders Keepers LLC led FBI agents four years ago.

According to legend, Dent’s Run is where a shipment of Union gold was waylaid in 1863 on its way to the U.S. Mint in Philadelphia. The treasure-hunting Paradas believed they’d detected the lost gold — totaling 79 tonnes — and they invited the feds to use advanced tools to confirm or deny their suspicions.

On March 13, 2018, the father and son led FBI agents to the spot, but they were asked to wait in their vehicle while the FBI investigated… and apparently excavated. When the Paradas were allowed near the site, they found a gaping hole. Hmm…

“I gotta find out what happened to all that gold,” said Dennis Parada, and he and his son have made it their mission to do just that, suing the feds on the basis of right-to-know law. But as one might surmise, the feds haven’t been forthcoming.

At first, the FBI claimed there weren’t any records to turn over; then after the DOJ applied some pressure, they admitted, yes, there were records, including 17 video files of the excavation, but they would feel more comfortable doling out the record in dribs and drabs. Over the next several years.

But most recently, Finders Keepers’ lawyer noted an inconsistency: “The government claims there are only four videos. Federal officials have not explained the discrepancy,” says The Associated Press wire.

“This raises the obvious question of whether videotapes were destroyed in the interim,” says attorney Anne Weismann.

A lotta twists and turns in this gold saga… We’ll keep you posted.

To the mailbag today: “Canada did not outlaw ethanol 10 years ago,” a reader corrects. “I have lived here all my life.

“It is actually mandated by provincial and federal governments… I wish they had outlawed it,” he adds.

“I don’t think we need to worry about running out of materials for EVs and their batteries anytime soon,” a reader writes, responding to The 5’s Monday issue.

“I’ve participated in two polls in the past year (one open-ended and one controlled) asking consumers if they planned to purchase electric vehicles in the next few years.

“In both cases, the ‘definitely not’ and ‘probably not’ responses totaled more than 70%.”