We call James Altucher “our resident crypto evangelist”… but he’s quick to point out, “I’m not a believer and I don’t have faith.”

“I see a lot of crypto believers out there. They have so much faith in them they will burn you at the stake if you don’t believe along with them. ‘Go buy gold, old man,’ they yell at homeless people in the street.”

James joins us today with his crypto outlook for the rest of 2022. But first, one more refresher about 2021.

“2021 was like a dream come true for crypto,” James said in this space three months ago. “Hundreds of millions in transactions now take place on crypto every day as opposed to near $0 back in 2018. DeFi and NFTs lead the pack with billions of dollars worth of transactions per year.”

The first of those two requirements is already in the cards.

“A lot of huge institutions (sovereign wealth funds of Middle Eastern countries, pension funds, big hedge funds, etc.) want exposure to crypto but they don’t quite trust the ecosystem. They are a bit nervous putting billions of dollars into something called ‘SushiSwap’ and then hoping they don’t get fired.

Example: James has been in touch with Marc Lore, owner of the NBA’s Minnesota Timberwolves. “I asked him, ‘What if someone created NFTs for you that acted like tickets?’

“He said, ‘We’re already implementing this.’ And so is every other sports team.

“This is just one of many, MANY real-world use cases. There are use cases in health care, real estate, supply chain management, storage, rendering of graphics and on and on. All of these applications are being developed.

“But for me to be happy I want to see them being used. So we’ll see. My bet on this is a big ‘YES!’ but I am not a person of faith and I want to see it happen, else my feelings might change.”

As for the 1 billion users?

“Currently,” James says, “there are about 300 million holders of crypto. I’m not sure I believe this but that’s the reported number.

“If you look at the internet, everything got frothy from 1997–2000 but there weren’t a billion users yet so that bubble burst.

“It took awhile before people felt comfortable putting their credit card into the internet. It took awhile for internet stocks, even Apple, to be valued based on earnings rather than the dreams of the tech world.

“When did all this start to happen? When there were a billion users, starting in 2005. Then things started to really happen and are still happening.”

Bottom line: “This year, or early next, I expect we’ll see real-world use cases and more than a billion users,” says James. “There are many things that will propel this forward.”

They include the VC-funded companies he mentioned earlier. Another is something James brought up here last month — Ethereum’s move from a “proof of work” model to a “proof of stake” concept that requires a fraction of the electricity needed to mine Bitcoin.

And then there’s this wild card: “The Russia/Ukraine war will also create a lot of demand and a lot of new users for crypto.”

We’ll have to get into that tomorrow. Other matters demand a place in our 5 Mins. today. But in the meantime, if you still haven’t taken the crypto plunge, James’ go-to reference is still available and still current: Grab your copy of The Big Book of Crypto right here.

The stock market is stabilizing after yesterday’s wicked sell-off.

Big movers include Microsoft — up 5.4% with a solid earnings “beat.” But revenue growth at Google parent Alphabet is slowing and GOOG is down 3.1%.

And then there’s Tesla — up 2.5% after a 12% whacking yesterday, prompted by buzz that Elon Musk will likely have to dump a big slug of his TSLA shares to pull off his acquisition of Twitter.

Meanwhile, Musk’s commitment to free expression on Twitter is coming into question.

What in the world does any of this mean? 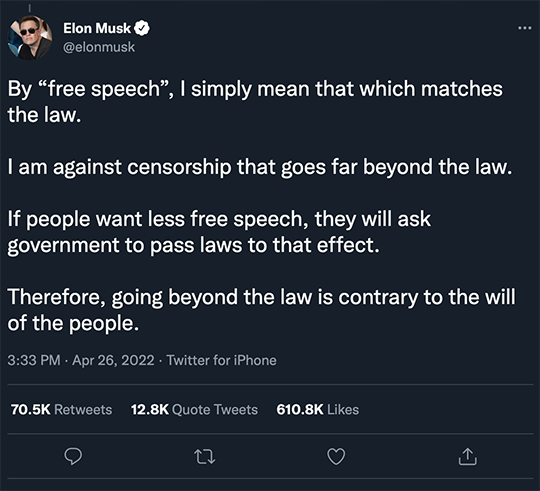 Doesn’t mean squat in the eyes of Lawrence Fossi, that’s for sure. Mr. Fossi belongs to the $TSLAQ community we mentioned yesterday. Starting in 2015, he began tweeting and posting many Tesla-critical articles on Seeking Alpha under the pseudonym “Montana Skeptic.”

Long story short, Musk’s fanboys doxxed Fossi and figured out he was a portfolio manager in Manhattan. On July 23, 2018, Fossi says Musk called his place of work and spoke with a colleague. “He’s going to have to sue you and he’s going to have to drag our boss into it,” Fossi recalls the colleague telling him.

Fossi folded up his tent the next day.

“[Musk] had never once attempted to contact me to say, ‘I think you got something wrong in your article, factually,’” Fossi tells the Mediaite website. “He didn’t email me or have anybody from Tesla do that.”

Back to the markets: Gold appears to have lost its grip on $1,900 for the time being.

No major economic numbers today, but tomorrow the Commerce Department issues its first guess at GDP for the first quarter of 2022.

This should be fun. The “expert consensus” among dozens of economists polled by Econoday is calling for a paltry 1.1% annualized increase. But the reliable “GDPNow” model issued by the Federal Reserve Bank of Atlanta anticipates a far more paltry 0.4%.

The actual number comes out at 8:30 a.m. EDT. Your editor might have popcorn for breakfast…

For the record: The feds have indicted Bill Hwang, founder of Archegos Capital Management. The charges include securities fraud, wire fraud and racketeering.

You can read about the details anywhere. The question we can’t shake is the one we asked at the time Archegos blew up just over a year ago: Who else is using the complex “total return swaps” that took down Archegos? And who are their counterparties?

In the year since, the big banks’ exposure to “equity derivative contracts” — leveraged bets tied to stocks, including those total return swaps — has grown from $4.197 trillion to $5.081 trillion. Yikes.

For all the climate-change headlines that have crossed our awareness over the years, this one makes it real… tangible… visceral… 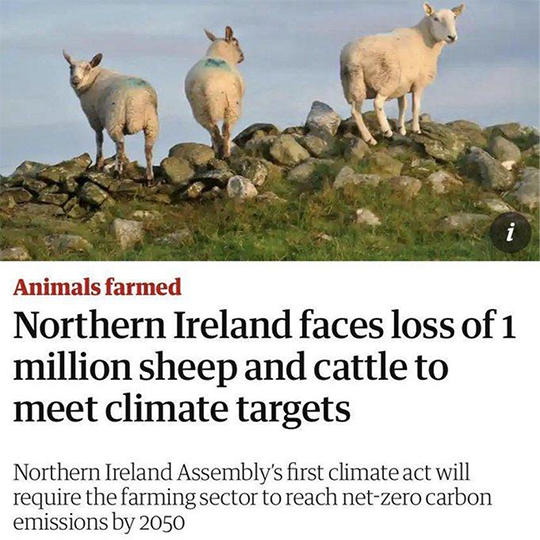 Last month, Northern Ireland’s legislature approved a climate-change measure setting a hard-and-fast target of net-zero carbon emissions by 2050. The measure includes a commitment to lower methane emissions by 46% over the same timeframe.

Now the fallout. From The Guardian: “About a third of human-caused methane emissions come from livestock, mostly from the burps and manure of beef and dairy cattle. Analysis by KPMG, commissioned by industry representatives including the Ulster Farmers’ Union (UFU), estimates more than 500,000 cattle and about 700,000 sheep would need to be lost in order for Northern Ireland to meet the new climate targets.”

Hmmm… According to the Northern Ireland government’s “Agricultural Census” in mid-2021, the total number of cattle was around 1.7 million… and the sheep population was just over 2 million. So they’d be looking at a 29% reduction in the cattle population and 35% fewer sheep.

Really puts those headlines about eating bugs in a different light, doesn’t it?

And as one wag on Twitter remarks, “Good thing Ireland has never had problems with crop diversity or famine.”

To the mailbag: “As I read the first portion of yesterday’s 5, I was reminded of an easy and fail-safe way to always know what the establishment’s core beliefs are. Just check to see what they are accusing their perceived enemies of at the moment.

“For example, currently and for quite a while now, misinformation has been a critical component of their playbook. So what do they accuse others of more than anything else? Misinformation, of course.

“It’s kind of a corollary of Joseph Goebbels’ big lie theory, which is another of their core competencies (widely used regarding Russia, which unfortunately played into their hands).”

“I have had it up to the top of my quickly balding head,” another reader adds, “with these people who say things like, ‘They’re a private company; the First Amendment doesn’t apply,’ when it comes to their defense of censorship.

“To each of those people, plus Robert B. Reich, I would like to know: Do any of those so-called private companies have to follow the 16th Amendment to the Constitution, along with the rules established under it?”

“Q: What do these have in common: official non-use of the metric system and worldwide taxation of income?

“A: Only the United States of America features both.

“Come to think of it, it’s not all that funny.”

The 5: Well, props for effort…

After bagging 97% gains betting against Jack Dorsey’s Block Inc. on Monday… they pulled in another 84% today with a bet against Boeing supplier Spirit AeroSystems.

New membership in Countdown to Crisis is currently closed… but we plan to reopen it next week to help you prepare for the ongoing fallout that’s coming from the Federal Reserve’s rate-raising cycle. Watch this space…