The End of the Internet as We Know It

Ah, yes: This might be the ultimate test of Elon Musk’s commitment to free expression… 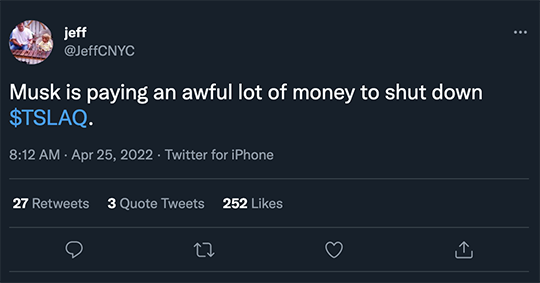 As you might recall, $TSLAQ is a community of finance folks on Twitter who believe Musk’s automaker Tesla is at best, massively overvalued… and at worst, an outright fraud. (The “Q” at the end of a ticker symbol indicates a company is bankrupt.)

When tweeting under his own name, he labeled Musk “Subsidy Fraud-Boy.” Then in 2020, Twitter suspended his personal account after he called a pro-TSLA Goldman Sachs analyst a “whore.” So he began tweeting under his firm’s handle — where we see he now calls Musk “Mr. Fraudsperger.”

Meanwhile, the meltdown of the Establishment is well and truly underway now that Twitter’s board has accepted Musk’s offer to take TWTR private for $44 billion.

As he did a few days ago, Bill Clinton’s secretary of labor Robert Reich best embodies the whole vibe… 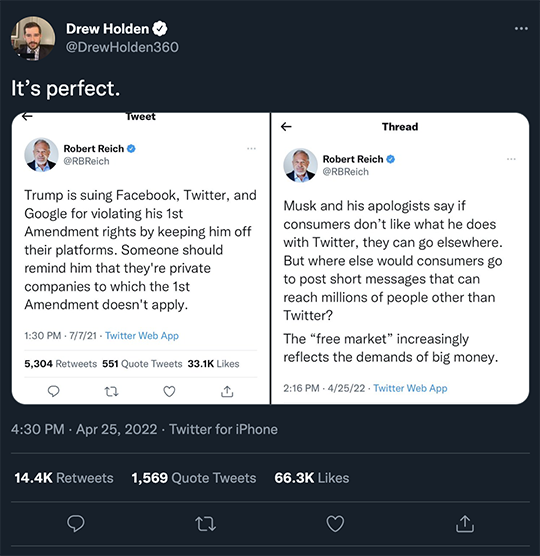 Really, it’s not the prospect of “an oligarch” controlling a major social media outlet, but rather the wrong oligarch.

And as one anonymous Twitter wag puts it, “The mask meltdowns are segueing seamlessly into the Musk meltdowns.” 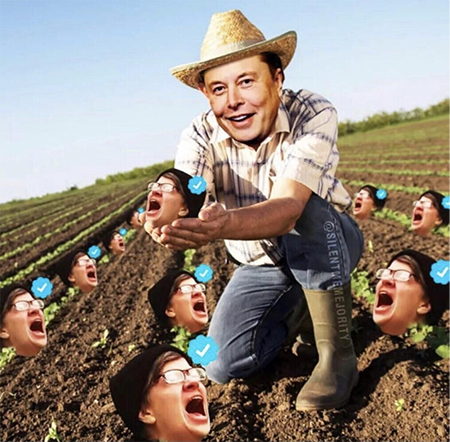 She even went so far as to demand “reforming Section 230” and “requiring more transparency” in order to fight COVID-19 “misinformation.”

Hmmm… Section 230 is a provision in the Communications Decency Act of 1996 that shields online platforms from liability for content posted by users.

That might sound obscure… but “large swaths of the internet exist because of it,” says venture capitalist and MIT professor Sinan Aral.

Really, it would be the end of the internet as we know it. We’ll keep you abreast of the Section 230 debate as it unfolds…

But in the meantime, the next few months are going to be very tiresome indeed.

The power elite will have a cow with every tiny change to Twitter’s terms of service… with every previously banned account that’s reactivated… and with every flaky idea Musk tosses out there just to get a rise out of his critics.

As we suggested earlier this month, Musk has the same problem Donald Trump does — an indiscipline that undermines his aims, assuming he knows what his aims are in the first place.

And as we also said in that same back issue, the federal government has any number of vehicles — starting with the Securities and Exchange Commission — with which to potentially hamstring Musk.

Harks back to Sen. Chuck Schumer’s warning to Trump shortly before taking office in 2017: “You take on the intelligence community — they have six ways from Sunday at getting back at you.” Stay tuned…

So much for yesterday’s late-day rally.

After we went to virtual press yesterday, the day’s losses reversed themselves and the major U.S. indexes ended solidly in the green. Today, they’re back in the red — and not by a little.

With the flight to safety, Treasuries are rallying — pushing yields down. The yield on a 10-year Treasury note is below 2.75% for the first time in nearly two weeks.

The big economic number of the day is durable goods orders. The headline figure disappointed, rising 0.8%. But if you strip out the volatile aircraft and military sectors, “core capital goods” jumped 1%, double what was expected.

Cryptos are losing ground — Bitcoin back below $39,000 and Ethereum below $2,900 — despite what seems like a super-bullish development.

Later this year, Fidelity plans to open up the 401(k)s it manages to Bitcoin.

“There is a need for a diverse set of products and investment solutions for our investors,” says Fidelity’s Dave Gray — and he believes crypto should be part of the mix.

True, the announcement comes with a boatload of caveats. It’ll be up to individual employers whether to include Bitcoin in their plans. And those employers might be very gun-shy in light of a recent warning from the Labor Department about the inclusion of crypto in retirement plans.

Too, even with ample disclosure, employers might open themselves up to lawsuits if their employees plunk money into Bitcoin and then it goes through a steep and sudden drop (as it does most every year, heh).

Dystopia watch: The government in the world’s seventh-most populous country has blocked outgoing calls to more than one-third of its mobile phone users.

The background from Reuters: “Nigeria has been rolling out 11-digit electronic national identity cards for almost a decade, which record an individual’s personal and biometric data, including fingerprints and photo.

“The National Identity Number (NIN) is required to open a bank account, apply for a driver’s license, vote, get health insurance and file tax returns. In 2020, Nigeria’s telecommunications regulator said every active mobile phone number must be linked to the user’s NIN. It repeatedly extended the deadline until March 31 this year.”

As of April 4, anyone who hasn’t complied has had outgoing calls blocked. That’s about 73 million people.

Yes, they can use WhatsApp as an alternative — but that requires a data connection that’s not nearly as reliable.

Of course, the justification is security — in this case, Nigeria’s long-running conflict with Islamist militants.

We can’t help but look upon this development in conjunction with India’s move in 2016 to instantly declare most of the banknotes in circulation null and void. Prime Minister Narendra Modi’s expressed an explicit desire to move to a “cashless society” — guided in part by the U.S. Agency for International Development and the Gates Foundation. Because of course…

For the record: For whatever reason, the U.S. expatriation numbers are shrinking dramatically.

After setting a record in 2020 — over 6,700 Americans surrendering their citizenship — the number collapsed by 64% in 2021. And the figure for the first quarter of 2022, released yesterday, is likewise meager. 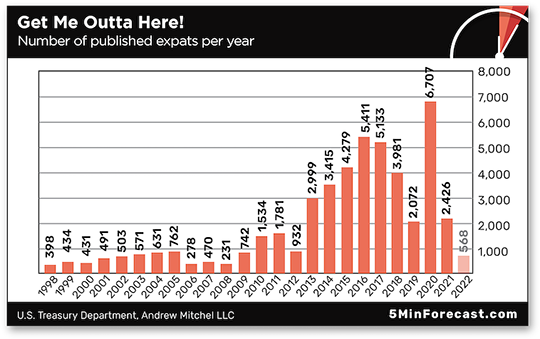 Why the shrinkage? We offered up some possibilities when last we explored these numbers last summer — along with the obligatory myth-busting we have to do now and then about “wealthy tax-dodgers.”

“I’m not an ‘expert,” a reader writes about the dire state of affairs in Shanghai…

“But has it occurred to anyone else that shutting down the world’s busiest port could be a way of manipulating world trade under the guise of pandemic control?”

Look, if you’re Xi Jinping and you’re going to deliberately tank your economy, you’d better have a compelling reason, even if it’s half-baked.

We return once more to a key passage from Jim Rickards’ first book, Currency Wars. He wrote it over a decade ago, but it’s as relevant as ever: Chinese leaders are obsessed with keeping people employed and off the streets.

“No one knows better than the Chinese Communist Party leadership what would happen if… jobs were not available,” Jim wrote.

“The study of Chinese history is the study of periodic collapse. In particular, the 140-year period from 1839–1979 was one of almost constant turmoil.”

1839 marked the start of the Opium Wars. 1979 marked the end of the Cultural Revolution. In between came the Boxer Rebellion, the Japanese invasion, the Great Leap Forward — basically a nonstop level of chaos no American alive today can relate to unless you’ve traveled to a war zone.

Just one example: “The Chinese Communist Party leadership understood that the 19th-century Taiping Rebellion had begun with a single disappointed student and soon embroiled the southern half of the empire in a civil war, resulting in 20 million deaths.”

Point being, the CCP is obsessed with maintaining social order above all else. If they’re taking steps that seem to threaten social order, presumably they’re doing so for well-considered reasons. Would “manipulating world trade” qualify?

More speculation: “Regarding the current Chinese lockdowns, and recognizing this is high-octane, low-probability conspiracy theory, I’m just throwing this out there as I’ve been surprised not to have seen it suggested anywhere (surely I can’t be the only fantasist to have thought of this?):

“Step 1: Tell the populace to stock up on food, medicines and other necessities. If they do, skip to Step 4; if not, go to Step 2.

“Step 2: Show the populace the folly of their inaction through draconian lockdowns in which people are unable to get even food, medicines and other necessities.

“Step 3: Again tell the populace to stock up on food, medicines and other necessities. (They will this time.)

“Step 4: With your domestic economy as resilient as possible to external sanctions, invade Taiwan.

“We obviously saw Step 1 and are in Step 2. Let’s see whether Step 3 follows.”

The 5: We were of a mind earlier this year that if Russia moved on Ukraine, China would move on Taiwan — the better to keep Washington’s resources spread thin. Obviously that’s not how it’s worked out.

Our George Gilder — whose enthusiasm for Chinese entrepreneurship is now outweighed by his suspicion of Chinese leaders — commented to his readers last week about a prospective invasion of Taiwan.

“It is difficult to fathom the stupidity of such a move. An invasion would turbocharge the efforts of India, Japan, Australia and Vietnam to contain the Dragon, and might even spook South Korea and Russia into reconsidering their relationships with China. It would certainly ignite an all-out trade war with the U.S. and maybe the EU, damaging to all but devastating to China.

“That doesn’t mean it won’t happen. It just means that we aren’t equipped to predict the insanity of leaders of the Chinese Communist Party nor the frivolity of U.S. leaders, who seem to believe their unrelenting expressions of hostility will have only good effects on Chinese behavior.”

“Congress should be required to take an economics course before being allowed to vote on any bills,” a reader writes after our hot take on Big Tech, antitrust and too-big-to-fail banks.

“Most members could tell you all about pop culture or social issues, but only a handful of them understand money, debt, banking, currency, monetary policy or even a simple budget.”

The 5: Uhhh… Are you sure the typical college econ course would leave them any better informed than they are now?