For most of us in the developed world, Bitcoin is still a curiosity. In Argentina, it’s increasingly a necessity.

The Wall Street Journal had a long piece this week about inflation in Argentina, now running at an official 55.1% year over year.

For some folks there, “They prefer the volatile asset of Bitcoin as opposed to the peso, where they know they will always lose,” says Damian Di Pace of Focus Market Consultancy.

Argentina is a microcosm of how global crypto usage will cross the threshold of 1 billion people sometime in the next year.

We pick up today where we left off yesterday — with James Altucher’s assessment that it’s go-time for crypto. In the same way that the internet achieved critical mass when it reached a billion users around 2005… crypto is set to do the same.

And at high speed, considering current estimates run only around 300 million.

From where James sits, the war in Ukraine will be the key driver behind that growth.

For starters, consider the possibility that oil will no longer be traded exclusively in dollars.

“Now that the currency of oil might possibly change, might not be in dollars, this could be a problem,” says James. “And not just for oil. Commodities in Ukraine and Russia include wheat, palladium and other natural resources.

But it’s not just the dollar pricing of oil and other commodities that could push the rest of the world toward crypto. James teases it out like this…

“What if they do sanctions on us? some countries are probably thinking…

“What if I can’t secretly buy oil? other countries are definitely thinking…

“What if the dollar falls apart and my currency is pegged to the dollar? other countries are probably fearing…

“All of these countries (and this list is about 100 countries) are thinking, Maybe I need a new currency. One that is globalized so no policy can be directed at me.

“That was the reason crypto was originally developed in 2009. Ultimately, society will lose trust in country-issued currencies and go to a more ‘democratic’ currency like Bitcoin.”

So about Bitcoin: As perhaps you know, James has soured on it. Not because its dollar price will go down, but because the dollar price of other cryptos will outperform.

“Right now, most cryptos trade together. When Bitcoin goes up, so does Ethereum, so does DOGE, so does Solana, or CAKE, or UNI, etc.

“But this will end soon. Ethereum 2.0 plus the massive real-world use cases being developed will lead to a decoupling of Bitcoin from the rest of the coins.

“Ethereum already has more transactions per day than Bitcoin. And many other coins will soon follow.”

Bottom line: “It’s when the world actually starts using crypto because IT HAS TO and not because it’s the cool tech thing to do — when that happens the world will change for the better.”

James literally wrote the book to help you get ready for this new world — The Big Book of Crypto. Everything you wanted to know but were afraid to ask, answered in 257 pages. Follow this link to learn how to get both an instant download and a hard copy shipped to your door.

To the markets, where traders seem nonplussed by a nasty downside surprise in the day’s big economic number.

The Commerce Department issued its initial guess at first-quarter GDP. As mentioned yesterday, the “expert consensus” among Wall Street economists was for a meager 1.1% annualized increase. The more-reliable “GDPNow” model from the Federal Reserve Bank of Atlanta was even gloomier, anticipating 0.4%.

None of the economists surveyed in advance of the number saw that coming.

The media are doing their best to explain it away: “Solid consumer and business spending suggest growth will resume,” says The Wall Street Journal. “The drop in GDP stemmed from a widening trade deficit, with the U.S. importing far more than it exports.”

Whatever. As we’ve long observed, GDP is a statistical abstraction with little relevance to your life or your standard of living. But when the official number flummoxes the alleged experts this badly, we can’t help lobbing a spitball or two…

Anyway, the stock market is rallying modestly — particularly the Nasdaq, which touched new year-to-date lows on Tuesday. At last check it’s up 1% on the day to 12,616.

Big movers include Facebook parent Meta Platforms — up 14% after quarterly numbers that showed tortoise-slow revenue growth. But FB appears to have stanched the losses in its daily user numbers and that’s all the Street seems to care about.

Gold? Stagnant at $1,886. Silver is about to crack below $23 for the first time since February. 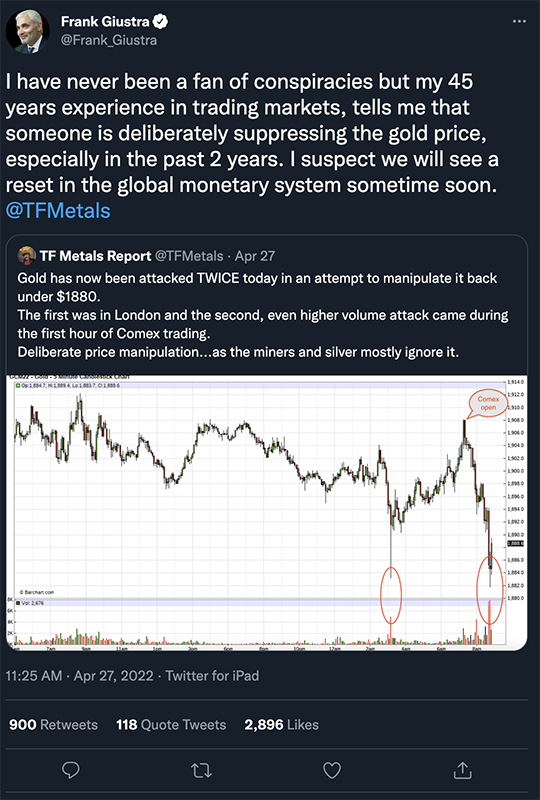 So that’s not just any Twitter blue check there. That’s Frank Giustra, the Canadian billionaire who’s a giant of the metals and mining business. He’s as super-connected as they come (including some rather controversial dealings involving the Clinton family and Russian uranium). If he says gold is being manipulated, well, we welcome him to the club.

“We think the Chinese economy at this moment is in the worst shape in the past 30 years,” says one of Asia’s top private equity bigwigs.

Weijian Shan is the founder and chair of Hong Kong-based PAG — which manages more than $50 billion in assets. In a video of a recent conference obtained by the Financial Times, Shan says his fund has diversified away from China, thanks in large part to the zero-COVID policy he finds “draconian.”

Interesting: Shan was a teenager in China while the Cultural Revolution was wreaking havoc. He knows a thing or two about his homeland’s history… so for him to speak of “popular discontent” brings to mind the mandate of heaven.

In one important sense, the Chinese communists are no different from the emperors of old. They rely on public perception that they have the “mandate of heaven” to rule.

The mandate of heaven is one reason we return regularly — including again this week — to the passage from Jim Rickards’ book Currency Wars in which he says social order is an obsession of the Communist Party. “The study of Chinese history is the study of periodic collapse. In particular, the 140-year period from 1839–1979 was one of almost constant turmoil.”

But in contrast with the unofficial news slipping out of China about the hellscape that is Shanghai under lockdown… state media would tell you everything is peachy-keen.

China’s English-language news channel CGTN is one of several international outlets we monitor with the sound down throughout the workday. Yesterday, CGTN devoted several minutes to a pop star’s home workout videos that are supposed to be all the rage while people are cooped up at home.

They even turned it into a business story… 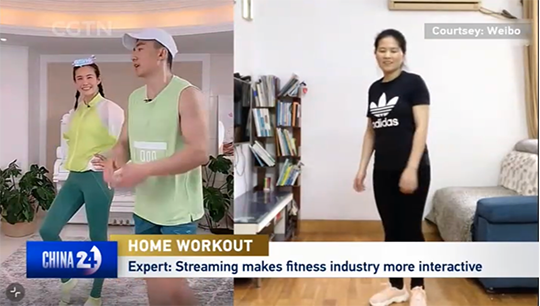 Hmmm… You need a regular intake of calories to keep up a workout routine, and from everything we’re hearing the food rations to many folks in Shanghai are either scant or nonexistent.

No wonder Weijian Shan is so keen to diversify out of the land where he was born.

OK, so this seems like a valid use case for a nonfungible token (or NFT)…

As every football fan knows, the video emerged hours before the start of the 2016 draft. Tunsil was originally projected to be the No. 1 pick… but he quickly slid down the board to No. 13, selected by the Miami Dolphins.

So yes, just in time for the 2022 draft tonight, he’s turning the video clip into an NFT — one of those signed-by-the-artist digital files that are an offshoot of the innovation in cryptocurrency. (Previous 5 coverage of the NFT phenomenon here and here.)

This is a good use of an NFT. It’s a unique clip and Tunsil is selling only one version with his authentication. Like fine art, it’s got scarcity going for it. (As opposed to, say, the NBA’s money-grubbing NFTs of random Kevin Durant dunks at three for $9.)

A portion of the proceeds will go to The Last Prisoner Project, a charity supporting people who’ve been sent to prison merely for smoking an herb of which the government disapproves.

So maybe Northern Ireland won’t have to cull a third of its cattle and sheep herds to meet climate-change targets? 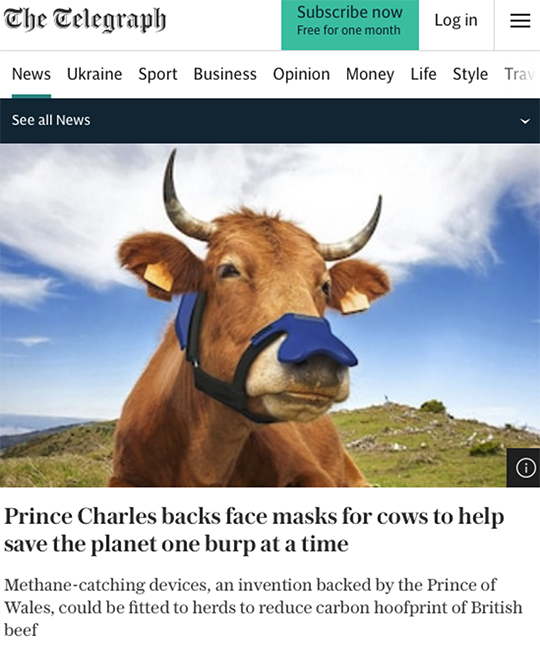 “The device sits around the animal’s head and captures methane emitted when it exhales. The gas travels through a microsized catalytic converter, and it is released into the atmosphere as carbon dioxide and water vapor.”

Supposedly the device cuts methane emissions by 53 — good enough to win a prize of 50,000 pounds ($62,200) from Prince Charles’ “Sustainable Markets Initiative.” The prince himself was part of the judging panel, along with Apple’s longtime design chief Jony Ive.

Really, we have no words. Stuff like this could put The Babylon Bee out of business…

P.S. I never forget a wedding anniversary, but some years I do forget The 5’s anniversary and it takes an esteemed colleague to remind me.

So it goes this year. The 15th anniversary was Tuesday. Our founding editor Addison Wiggin hit the “send” button on the premiere episode April 26, 2007.

We did a 10th anniversary retrospective in 2017. The ensuing five years have felt more like 10, given everything that’s happened.

But all along the way, we’ve had the steadfast support of readers like you. So whether you’ve been with us from the beginning or whether you’re a newcomer, we thank you for your readership and your trust — which we know we have to earn anew each day.