Jumping to conclusions much, sir? 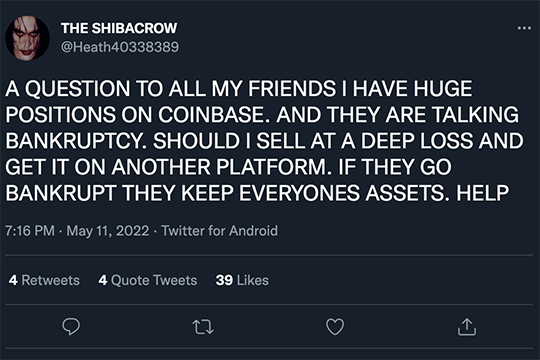 This isn’t even a case of reading the headline and not the article. The dude didn’t even read the headline right.

We’re joined today by our crypto team of James Altucher and Chris Campbell to help make sense of a big development with one of the major crypto exchanges — a development that’s helping fuel panic throughout the crypto space.

“People are worried about two things when it comes to Coinbase,” they tell us: “Coinbase failing and the recent disclosure about customers’ funds.”

In the first place, Coinbase (COIN) is not going bankrupt. It just looks that way seeing as its share price has been slashed by…

Some of that is a reflection of general crypto turbulence and some of it is lousy quarterly numbers.

So let’s back up a moment: As James and Chris explain it, crypto exchanges fall into roughly two categories. They’re either like Fidelity… or they’re like Lehman Bros., the signature failure of the 2008 financial crisis.

“Lehman Bros. was like a hedge fund in disguise. That’s why they went bankrupt. Coinbase is a bit more like Fidelity. They simply help customers buy and sell crypto assets. They don’t speculate in the crypto markets and, as it stands, have no risk of bankruptcy.”

Going forward COIN plans to grow its business by making it easier for both retail and institutional investors to get into crypto. In addition, “Coinbase builds tools that help crypto holders spend their coins, access decentralized tools, borrow and lend, stake and set up tools to help businesses accept crypto. Most of their acquisitions are in this area.”

Key point: “None of these is about speculating in the crypto market.

“They have $6 BILLION in cash. Their loss this quarter was $429 million with profits still expected for the ongoing year. This is not a bankruptcy situation.”

OK, so what about the bankruptcy-adjacent disclosure that seems to have so many Coinbase customers in a tizzy?

Here’s what the company stated this week in fine print along with its quarterly numbers: “Moreover, because custodially held crypto assets may be considered to be the property of a bankruptcy estate, in the event of a bankruptcy, the crypto assets we hold in custody on behalf of our customers could be subject to bankruptcy proceedings, and such customers could be treated as our general unsecured creditors.”

Next key point from James and Chris: “The disclosure item that people are nervous about is a mandatory disclosure the SEC requires of any company holding crypto just reminding people that in the case of a bankruptcy, crypto assets are like any others.

Besides, for anyone genuinely concerned about the prospect of Coinbase going belly-up, CEO Brian Armstrong reminds his customers “we of course offer a self-custodial wallet solution (Coinbase Wallet) for those who prefer to store their own crypto.”

It comes back to the saying “Not your keys, not your crypto.” Armstrong wouldn’t be offering customers a wallet option if he intended to run off with customers’ assets.

The trouble is in the crypto niche known as stablecoins.

The value of a stablecoin is typically pegged to the value of a more traditional currency, often as not the U.S. dollar. For crypto-heads, the advantage of stablecoins is that transactions settle much faster than they do in clunky traditional financial channels. It’s almost instantaneous — in contrast with, say, a check you deposit at the bank that doesn’t show up in your account balance for 24 or 48 hours.

As mentioned here on Tuesday, a stablecoin called Terra has run into trouble. Hypothetically pegged to the dollar, it traded yesterday as low as 23 cents.

The trouble with Terra has spilled over into other stablecoins. The most widely used stablecoin, Tether, is also pegged to the dollar… but overnight it traded as low as 95 cents.

Instability in stablecoins has led to instability in nearly all cryptos. Really, it’s a rout — and one taking place alongside more traditional asset classes. A chart of Bitcoin and a chart of the S&P 500 over the last week look eerily similar.

“What will it take to end this?” tweets Bianco Research chief Jim Bianco. “Total and complete capitulation. Everyone sells and all that is left are diamond hand hodlers.

“Then we start over.”

That’s how it goes in crypto. If you still haven’t explored crypto yet… we daresay now is the time to start boning up. Then you’ll be ready for the next monster rally — as long as you can handle 50% annual drops along the way. (Again, that’s just how it goes.) James’ and Chris’ Big Book of Crypto is still available at this link.

The major U.S. stock indexes appear to have found a bottom, for the moment anyway.

Apple is slightly in the red at last check — a day after it lost its crown as the world’s most valuable company to Saudi Aramco.

The Wall Street Journal confirms what was speculated more than a month ago: The SEC is investigating Elon Musk for tardy disclosure of his stake in Twitter. At this stage, we’d lay down less than even money that Musk will pull off his planned acquisition of the company.

Treasury yields continue their slide back, the 10-year now 2.87%.

If you hold gold, it’s still cushioning the blow of year-to-date losses in stocks and bonds. But at $1,842 this morning, the Midas metal is up less than $20 from where it began 2022. Silver, meanwhile, is now in the red for the year at $21.11. (That’s “paper silver,” to be clear. Real metal in your hands is worth more.)

Crude is up nearly $2.50, back above $107 in yet another volatile trading session. 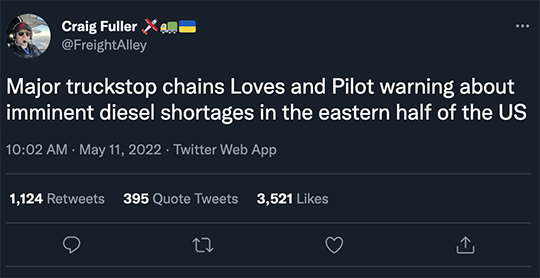 That comes from Craig Fuller, founder of the FreightWaves website and owner of American Shipper magazine.

The Energy Department’s weekly inventory numbers reveal another drop in stockpiles of ultra low sulfur diesel on the East Coast. They’re approaching record lows. But so far, the pricing of diesel in futures markets doesn’t reflect that tightness in supply.

For its part, Pilot Flying J issued a statement to FreightWaves: “Most markets in the eastern U.S. remain extremely low on diesel inventory levels and refinery issues are creating tightness in the St. Louis and Indianapolis markets.

“To prepare, Pilot Co. has built a resilient supply chain over the last several years and is taking additional actions to secure extra supply and mobilize our fleet to deliver diesel to areas facing tight availability, such as Virginia and Georgia. All other markets are currently adequately supplied.”

Less sanguine is John Catsimatidis, the billionaire CEO of United Refining: “I wouldn’t be surprised to see diesel being rationed on the East Coast this summer,” he tells Bloomberg. Oy…

To the mailbag: “Why aren’t we seeing lawsuits filed because the Disinformation Governance Board violates the First Amendment?

“And why aren’t Republican Congress critters screaming for Joe Biden’s impeachment for not upholding the Constitution?”

The 5: Well, the Disinformation Governance Board hasn’t really done anything yet. But once it does, we have little confidence the courts will push back.

There’ve already been a couple of cases challenging federal pressure on social media companies… and they were just tossed out.

Changizi vs. HHS looked especially promising. From the case summary supplied by the New Civil Liberties Alliance: “Outrageously, the U.S. Surgeon General and the Department of Health and Human Services (HHS) have directed social media platforms including Twitter to censor alleged ‘misinformation’ about COVID-19…

“On March 3, the Surgeon General demanded that the tech companies turn over information about individuals who spread such ‘misinformation,’ a clear intimidation tactic that HHS has labeled a ‘Request for Information’ (RFI). In response to government pressure, Twitter has permanently banned [Michael] Senger, and temporarily suspended [Mark] Changizi and [Daniel] Kotzin.”

Plaintiff Daniel Kotzin, by the way, is the husband of Jennifer Sey — the Levi’s executive who was forced out because of her loud objections to COVID school shutdowns in the San Francisco Bay Area.

As for Congress… “House Republicans on Wednesday introduced a bill to defund the recently announced Disinformation Governance Board,” according to The Hill. It has the backing of Minority Leader Kevin McCarthy.

Impeachment? If the GOP wins control of Congress in November, we fully expect impeachment proceedings surrounding the Hunter Biden mess.

And we fully expect the GOP to screw the pooch. We haven’t forgotten how Barack Obama’s illegal, immoral and unconstitutional regime-change op in Libya somehow became all about “Benghazi.”

“We make fun of the 1950s’ duck-and-cover drills, but at least they realized a nuclear war was possible,” writes a reader still contemplating our Monday edition.

“It’s not as simple as the movie WarGames makes it. Joshua won’t run simulations and calmly come to a logical conclusion.

“Having just watched the films Fail Safe and Dr. Strangelove, I was struck that Strangelove, despite being a dark comedy, was the more likely demonstration of how a war would break out. In Fail Safe, it was an accident that led to the destruction of New York and Moscow. In Strangelove, it was incompetent, crazed leadership.

“Daniel Ellsberg did call Strangelove a documentary for a reason.”

“I loved your reader’s comments on student loans,” reads a reaction to yesterday’s edition.

“Sorry to see you mention that the issue may have been a government shortcoming rather than the students.”

Higher demand = higher prices. Result? There was a time you could pay your way through college with a part-time job slinging pizzas or whatever. That time was probably gone already 30 years ago — even at many state schools.

Things might be reaching the breaking point, and not a moment too soon… 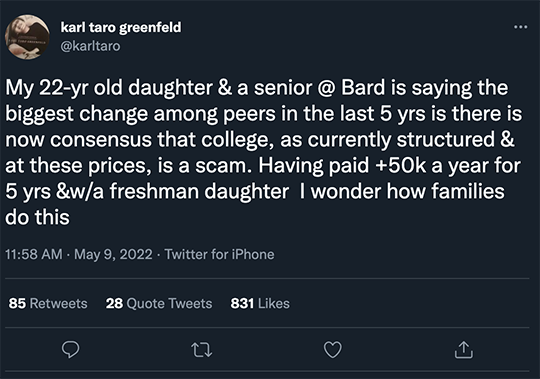 Maybe it took crappy Zoom classes at in-person tuition rates to finally reveal the “value proposition” for what it is.

If there’s one good thing to come out of lockdown, it would be the undoing of the higher-ed cartel…