The Target on Elon Musk’s Back

“The problem with any movement based around one person is that the whole movement is only as good as that person and shares his or her flaws and vulnerabilities,” writes J.D. Tuccille at Reason.

Tuccille could have been writing about Donald Trump, but he was in fact referring to Elon Musk.

For better or worse, Trump made himself the symbol of rebellion against the excesses and failures of America’s power elite.

And for better or worse, Musk just made himself the symbol of rebellion against the power elite’s heavy-handed suppression of dissent using the vehicle of social-media censorship.

Early indications are Musk will use his new 9.2% stake in Twitter to foster an environment of freer expression — and not just because of that poll he conducted on Twitter in late March. 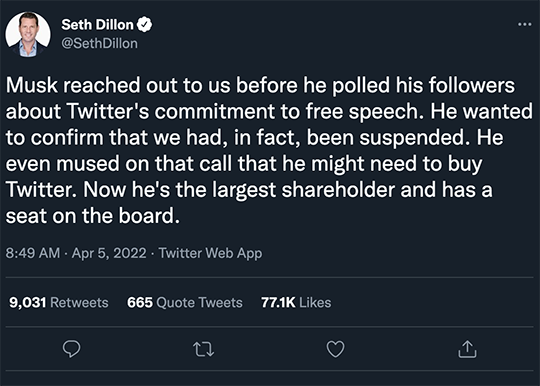 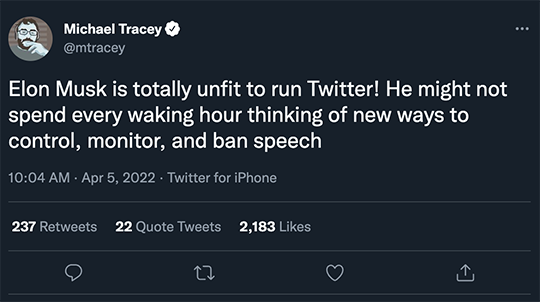 Thing is… long before the Twitter gambit, Musk made himself a target. We said as much in January.

Now Fox Business speculates that “Musk may have just picked another battle with the Securities and Exchange Commission, setting up a potential showdown over how he disclosed his investment in Twitter.”

The SEC requires anyone who buys more than 5% of a company’s common shares to disclose that fact within 10 calendar days. Musk’s filing on Monday appears to have come after a span of 21 days.

In addition, the filing was a 13G — a form that deep-pocketed investors use when they don’t plan to influence the company’s business decisions. Late yesterday, Musk filed amended paperwork — a 13D form, which is what activist investors use.

Granted, when you’re the world’s richest person with a net worth of $288 billion, a potential fine of $100,000 is more than manageable. “We also know from Elon one of his favorite things to do is to troll the SEC,” University at Buffalo professor Michael Dambra tells Fox.

But he is a target: “Musk is already at war with the Securities and Exchange Commission, which isn’t shy about weaponizing its power against opponents. His Twitter move could draw further regulatory attention and potentially hobble his efforts. Musk also faces accusations of retaliation against critics within his company and in the outside world.

“Whatever the truth of those claims, it’s easy to see that the clout he wields at Twitter might just as easily be wielded against free speech as in its favor.”

In any event, readers of The Profit Wire were well positioned to take advantage of Musk’s move on Monday, bagging a 145% gain. We’d recommended TWTR call options in late January based on the activity of connected insiders spotted by our proprietary QIT-4 indicator. We didn’t know what they knew… but we knew something was afoot. Watch this space for when we reopen The Profit Wire to new readers this spring.

To the markets, where the media narrative is that everything’s selling off because the Fed is getting more hawkish.

“It is of paramount importance to get inflation down,” said Fed Governor Lael Brainard yesterday — making clear the Fed will start a “rapid” reduction of its $9 trillion balance sheet in early May. 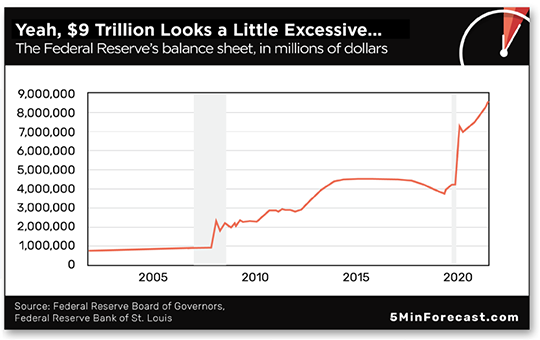 Thus, Brainard’s put the fear of God into Wall Street types who’ve become accustomed to a steady supply of easy-money heroin since 2008. Stocks and bonds sold off yesterday, and that sell-off continues today.

More hawkish screeches from the Fed might be audible by the time you read this; the Fed is due to release the minutes from its March meeting this afternoon. As we always say, the minutes are primarily a political document aimed at eliciting a market reaction. This time, as long as that reaction is an orderly sell-off as opposed to a messy one, the Fed will be OK with that.

Bonds are selling off along with stocks, pushing interest rates higher. The yield on a 10-year note is now 2.6%, the highest since March 2019. 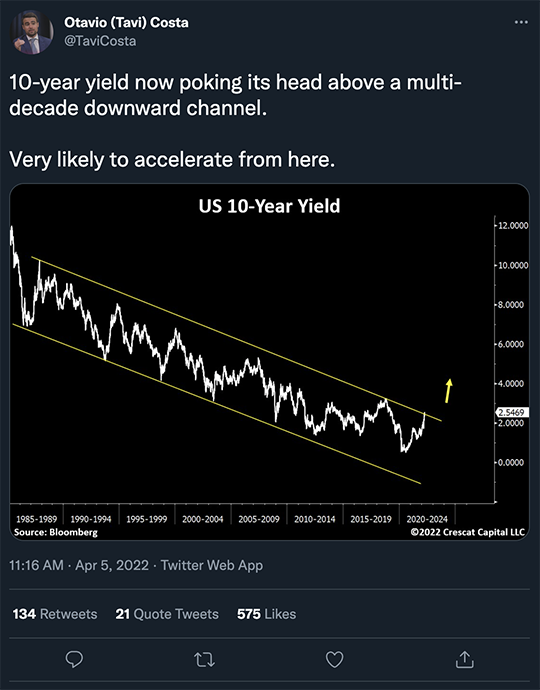 Hmmm… For a decade, we’ve been skeptical about mainstream claims that “long-term rates have nowhere to go but up.” We were skeptical when the 10-year yield set a record low in 2012… and again in 2016… and again in 2020.

But America’s been in a generally falling-rate cycle since the early 1980s, and nothing lasts forever. So we’re no longer as certain.

A new cycle of rising long-term rates is bad news for bond investors… and for Uncle Sam, because rising rates translate to rising interest expense for a federal government now carrying $30.3 trillion in debt. But those are topics for another day.

Cryptos are taking it on the chin along with stocks and bonds — Bitcoin at $43,678 and Ethereum about to break below $3,200.

“There’s one class of stocks that does much better after the yield curve inverts,” advises our income-investing specialist Zach Scheidt.

As we’ve mentioned in recent days, interest rates on shorter-dated Treasuries are now higher than on longer-dated notes. The 2.6% rate on the 10-year note we mentioned a moment ago? The 7-year, 5-year and 3-year notes all have a higher yield as we write this morning. (For the moment, the much-watched 2-year is lower — a hair below 2.5%.)

Over the decades, an inverted yield curve has been a reliable predictor of a recession. The problem is the onset of the recession can be anywhere between six and 24 months in the future.

Zach likens a “normal” recession’s impact on stocks to controlled burns in a forest — they clear out the deadwood. “A few speculative companies may go bankrupt. Others may decide to be more prudent with their cash. But in the end, this leaves us with stronger companies to invest in. And growth from that point can be much more reliable.”

Thus, the top performers in a recession will be “shares of quality companies with strong balance sheets and reliable profits,” Zach advises.

“Companies that don’t carry too much debt compared with their assets and that make money in any market are great companies to invest in after the yield curve inverts.

“Based on several historical tables I looked through, these stocks hold up the best regardless of whether a recession happens after an inverted yield curve.”

In addition, Zach reminds us the inversion right now is extremely mild. “Looking back over history, the yield curve was much more accurate at predicting recessions when the curve inverted by a lot,” he says. “And it was much less accurate when the inversion was small like we see now.”

Either way, we’ll keep you in the loop…

While the Biden administration imposes performative sanctions this morning on Vladimir Putin’s daughters… the real news is an admission that the plan is to drag out the war indefinitely.

It’s right there in The Washington Post: “Ukraine’s Western backers have vowed to respect Kyiv’s decisions in any settlement to end the war with Russia, but with larger issues of global security at stake, there are limits to how many compromises some in NATO will support to win the peace.”

That’s the lead to the story. The most newsworthy nugget waits until the ninth paragraph: “Even a Ukrainian vow not to join NATO — a concession that Zelenskyy has floated publicly — could be a concern to some neighbors. That leads to an awkward reality: For some in NATO, it’s better for the Ukrainians to keep fighting, and dying, than to achieve a peace that comes too early or at too high a cost to Kyiv and the rest of Europe.”

Which jibes with everything we said last week about how the war is central to Washington’s aims of regime change in Moscow. And how sanctions will ironically shore up Putin’s domestic support instead.

If your bingo card said “Peru” would be the first country rocked by inflation riots, step up and collect your prize. 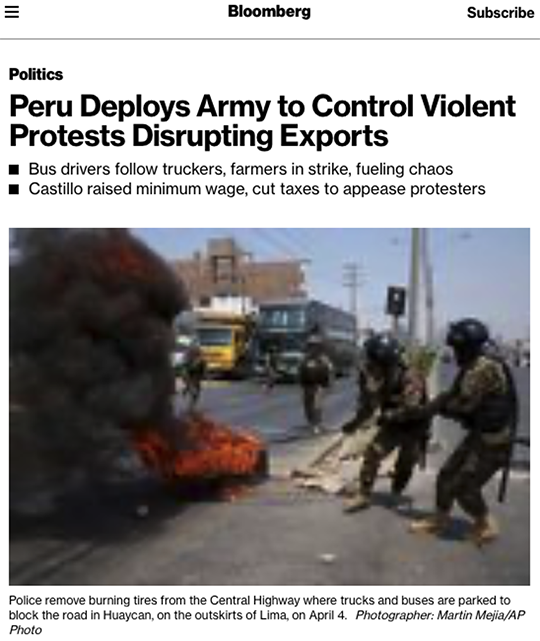 “Peruvian President Pedro Castillo has imposed a curfew in the capital, Lima, and the port city of Callao following nationwide protests over rising fuel and fertilizer prices,” reports the BBC.

Even bus service was cancelled. “It’s a shame. We’re experiencing a terrible economic situation, brother,” says Juan Gutiérrez to the newswires. The 45-year-old father of four had been waiting for a bus to get to work for more than an hour.

We understand the curfew has now been lifted. But the crisis isn’t over. And what’s happening in Peru won’t stay in Peru.

To the mailbag: “Where is ethanol cheaper than gasoline?” inquires one of our regulars after yesterday’s edition.

“I have a 100% ethanol-burning fireplace and the cheapest ethanol I can find is $21 a gallon at Walmart. So at $5 a gallon, gasoline is way, way cheaper.

“In southwest Oregon I have never seen 100% ethanol at a local gas station. Maybe in the corn-producing parts of the country it is available but I am skeptical it is cheaper than gasoline anywhere.

“Just a reminder E85 alcohol is 85% ethanol and 15% gasoline. That will not work in my fireplace.”

The 5: We don’t have a ready answer to your inquiry… but you do remind us we’re bound to hear stories soon about the theft of restaurant grease to make biodiesel!

P.S. Congratulations to Rickards’ Crash Speculator readers — who collected an 86% gain in only five days playing put options on Starbucks.

The recommendation went out on Friday… founder Howard Schultz’s first move in his return as CEO was to suspend share buybacks Monday… and today looked like a good day to take profits. Love it when a plan comes together…