The story made headlines for less than a day last month. And as usual, Establishment financial media overlooked the significance.

From Bloomberg, May 26: “Chinese Premier Li Keqiang warned of dire consequences if officials don’t move decisively to prevent the economy from sliding further, saying a contraction in the second quarter must be avoided.

“His comments to thousands of local officials at an emergency meeting Wednesday were more frank than the official readout published by state media.”

The Washington Post’s spin went like this: “China’s premier said in an emergency meeting Wednesday that the Chinese economy faces ‘grim challenges,’ in an unusually stark warning that comes as coronavirus controls have paralyzed parts of the world’s second-largest economy.”

Even the official accounts from Chinese state media were grim — with Li saying China’s economy faces a bigger challenge now than at the start of the pandemic in early 2020.

But the real story, according to our international economics guru Jim Rickards, is that a power struggle is emerging in Beijing.

Li Keqiang might be the most interesting man in China’s power structure. And it’s fair to say China’s economic prowess has always been his top concern.

Three years before he became premier in 2013, Li first came to the attention of Westerners thanks to WikiLeaks.

Li turned up in one of the State Department cables pinched by Chelsea Manning and published by Julian Assange in 2010. The cable was dated 2007, when Li was still just the Communist Party chief in Liaoning province.

During a meeting with the U.S. ambassador to Beijing, Li said he considered most of China’s economic statistics to be “man-made” and unreliable.

If he really wanted to take the pulse of China’s economy, he looked at only three things. Here’s how we depicted it in The 5 on Dec. 12, 2010:

“By looking at these three figures,” said the diplomatic cable, “Li said he can measure with relative accuracy the speed of economic growth. All other figures, especially GDP statistics, are ‘for reference only,’ he said smiling.”

In the years since, several analysts and experts have tried to construct a “Li Keqiang index” incorporating these three elements.

Here’s one that’s updated through the end of April — not long before Li’s speech: 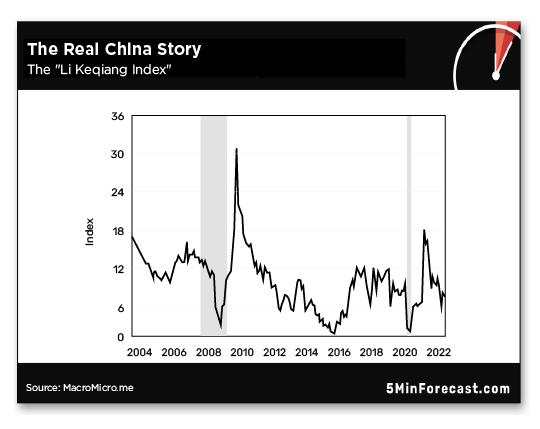 Hmmm… Not great, but it was worse during the initial corona-crash of 2020. Likewise with China’s financial swoon in late 2015 — an event that did a number on American markets too, even if no one remembers now.

So about that power struggle…

“Chinese governance is complicated and not well understood by most Western observers,” Jim Rickards tells us. “Still, it’s not difficult to explain.

“There are two parallel governance structures organized as top-down silos. These parallel structures duplicate every important function at every level with one critical difference.

“The first silo is what we would consider state power. This consists of a premier of the country, the provincial governors, city mayors, local administrators and other bureaucrats. It’s not a democratic system, but it’s functionally the same as the system of president, governors and mayors we have in the United States.

“The second silo is the Chinese Communist Party (CCP). The head of the CCP is the general secretary, currently Xi Jinping. He governs through a small political bureau of 25 members called the Politburo. Inside the Politburo is a core governing group of seven members known as the Standing Committee. Below these officials are party secretaries of major cities and regions such as Guangdong, Shanghai, Tianjin and Beijing. There are numerous subordinate officials, and then rank-and-file party members called cadres.

“The key to understanding this structure is that all of the real power resides in the CCP. The government officials may have responsibilities and day-to-day duties, but at every level they are overseen by CCP officials who monitor their loyalty and have the last word on key decisions.”

So for Li to speak up now — with a sly rap on Xi’s draconian “zero COVID” lockdown policies — suggests something’s afoot in Beijing.

“Yet rumors are rife in China that Xi is losing support inside the Standing Committee. It’s also reported that Li is leading a clique that may aim to push Xi aside at a National People’s Congress this November.

“The removal of Xi is a longshot. He probably has the internal muscle to push his enemies aside as he has in the past. Still, the public dispute is extraordinary. Regardless of who wins the political struggle, it seems clear that Li is correct about the Chinese economy. It is doing poorly. Even the CCP can’t wish that reality away.”

And just as happened with the 2015 slowdown, what’s happening in China won’t stay in China.

For one thing, there’s the ongoing meltdown at the giant property developer China Evergrande. It still owes billions to foreign bondholders.

One of those bondholders is a German financial analyst named Marco Meltzer. He bought a few bonds last November as an experiment — testing whether the media’s “everything’s fine, nothing to see here” coverage was justified.

He says he recently received a letter from Citi — one of the paying agents for Evergrande’s dollar-denominated debt. “Evergrande has defaulted on our bond and I will never see my money again,” he tells the Asia Markets website.

Elsewhere, there’s this bombshell from Bloomberg: “Traders are rushing to check that the metal they hold in Chinese warehouses really exists, as allegations of irregular financing trigger a widespread loss of confidence in the world’s largest aluminum market.”

Lotta moving parts here. We’ll stay on top of it as spring turns to summer.

In the meantime, the U.S. stock market is shockingly quiet.

Last week, the White House announced the president would visit Saudi Arabia this month. Then it announced the visit had been pushed back to next month, no reason given.

Here comes the spin from Riyadh: “The visit was delayed until [the U.S.] meets the Saudi demands,” says Ibrahim Al-Nahhas, a member of Saudi Arabia’s Shura Council. “[It was delayed] until arrangements are completed in a way that serves the interests of the Kingdom and the region,” he added in a TV interview cited by Turkey’s Anadolu news agency.

Exactly what those demands are, we don’t know. But it’ll be even harder now for the president to not look as if he’s begging the House of Saud to pull his rear end out of an oily sling.

The prospect made for a rare awkward moment during yesterday’s White House press briefing: 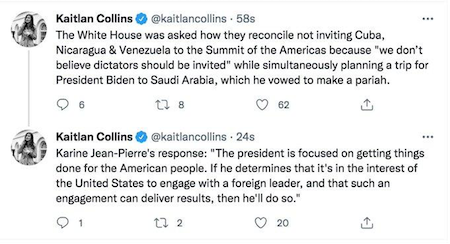 Under the previous president, the media would have slammed that rationale as “transactional.” (Which doesn’t make it less true…)

We interrupt what feels like a daily dirge of doom for what might be good news: GloboTax is in trouble.

“What economists hailed as the most ambitious tax overhaul in a century is now mired in a toxic mix of fine print and political paralysis,” says The New York Times.

Last fall, representatives of 136 governments and jurisdictions agreed to implement a minimum 15% corporate income tax rate — along with a system to tax large profitable companies based on where their goods and services are sold and not on where company headquarters are located.

That would require a rewrite of U.S. tax law — and the Times says that’s not proceeding well. It appears Senate Democrats are keen to bundle up the tax changes with some sort of slimmed-down version of Biden’s “Build Back Better” proposal. And as we mentioned last week, that’s proving easier said than done in a 50-50 Senate.

Meanwhile, Poland is gumming up the works for a deal among European Union nations.

“If both the United States and Europe cannot manage to comply with the agreement,” says the Times, “the global deal is likely to unravel.”

“Determining the true number of fake Twitter accounts is a much more complicated problem than Elon Musk makes it out to be,” ventures our tech-investing wizard Ray Blanco.

Much of financial media were consumed yesterday with Musk’s threat to terminate his Twitter takeover on the grounds that the company still hasn’t come through with valid data on spam and fake accounts. TWTR says only about 5% of accounts are bogus; Musk suspects it’s closer to 20%.

But Musk’s demands aren’t met easily, Ray tells us: “For starters, bot accounts don’t necessarily deteriorate the user experience. An example of this would be a news-posting bot account that automatically posts top headlines every day. This is a clear public service for users.

“While Musk claims that bot accounts are like termites in your house, the positive or negative impact of bot accounts is much harder to quantify. And while Musk isn’t wrong to want accurate information about the platform he is about to purchase, gathering that data takes time and effort.”

“Janet Yellen, Prognosticator Extraordinaire,” says the snarky subject line of an entry in our virtual mailbag.

“So Janet Yellen says it will be ‘a long time, if ever’ before the dollar is replaced as a key reserve currency in the global economy…’

“Is this the same Janet Yellen who a year ago said inflation was ‘a small risk’, ‘manageable’, and ‘not a problem’?

“Time to ramp up the gold and junk silver purchases.”

The 5: One and the same. Also the same Janet Yellen who in 2017 declared another 2008-level financial crisis was unlikely to occur “in our lifetimes.”

In retrospect, the “repo” crisis of late 2019 posed a serious systemic risk to financial markets. But then the virus came along and gave the authorities convenient cover for another bailout. 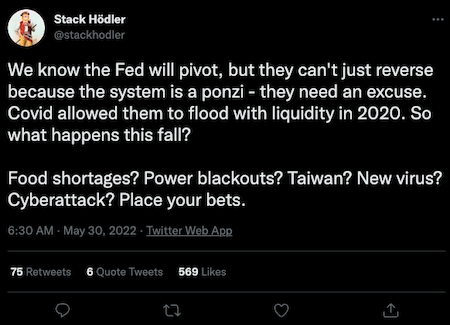 Gee, maybe we should make a bingo card out of it like the one we spotted in 2020…