“Stocks dumped on news of the 75-basis-point rate hike, jumped on hopes that Powell would hint at a dovish pivot and sold off sharply into the close,” says Jim Rickards’ colleague and chief analyst Dan Amoss per the FOMC meeting yesterday afternoon. And its aftermath…

“Powell’s press conference was hawkish,” he continues. “He stayed on message, repeating the hawkish tone he used at the August Jackson Hole speech that sparked a big market sell-off.

“Powell said the Fed wants to see a better balance between supply and demand and convincing evidence that inflation is moving back toward 2%.”

The chances of a soft landing? 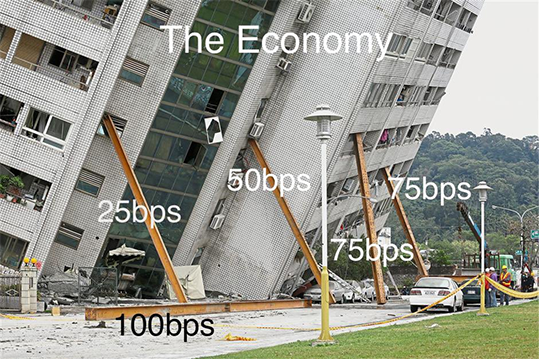 Put it this way, Powell said: “I wish there were a painless way [to cool inflation]. There isn’t.”

Dan observes: “The Fed has taken control over so many markets, including stocks, the reality is that the Fed has boxed itself into a potentially destructive feedback loop…

“Traders in the 2-year Treasury market are watching the Fed for guidance on where to price yields… and the Fed is watching the 2-year yield for feedback on how the market is reacting to its rate hikes.

“Stocks are moving lower as 2-year yields move higher.” (About 4.1% at the time of writing.) “Word is spreading quickly that there is an alternative to stocks: 2-year Treasuries yielding over 4%,” Dan says.

Meanwhile? “Passive index fund and ETF investors and many retirees are still heavily weighted in risky stocks with unrewarding dividend yields under 2%.

“Until the Fed has clearly indicated that it’s done with rate hikes,” Dan says, “the path of least resistance for stocks is lower.”

Paradigm editor Ray Blanco adds: “Rate hikes take time to bake in. On average, it takes about nine months for rate hikes to achieve the desired effect of reining in inflation.

“And while historic market data doesn’t perfectly indicate what the future will bring, it can be useful to see how investors have reacted in the past when similar rate-raising cycles were unfolding. 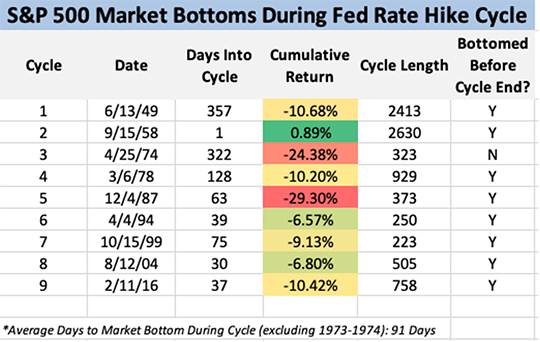 “What we’re looking at here is price action in the S&P 500 during major Fed rate hikes.

“Since 1945, the S&P 500 has bottomed during eight of the last nine major Fed hike cycles,” Ray explains.

“Average trading days to bottom from the first hike: 91 days.” For some context: “In March 2022, the Fed kicked off its rate hike cycle with its first hike of 25 bps,” Ray says, “which puts us 188 days into the rate-raising cycle.

“The most recent market bottom we saw was on June 16 — 92 days into the Fed’s most recent rate-raising cycle.

“Until inflation starts to fall, the Fed is likely to remain aggressive in terms of raising its rates and reducing the money supply,” Ray says. “Generally speaking, this has a negative effect on the stock market.

“If investors see proof of slowing inflation, I see a chance for a market turnaround,” he concludes. “But for now, inflation is still a big problem for impatient investors.”

[To ALL Paradigm readers: Yesterday’s Fed hike has far-reaching consequences, more than anything you’re seeing in the mainstream financial media.

Jim Rickards has been warning our readership that the Fed’s latest hike is the “Death Angel” of the American financial system… affecting everything from the value of your home… to when you can afford to retire… and even how much food will be on store shelves in the months ahead.

To help walk you through these troubling implications, Jim is hosting an urgent Zoom call for readers TOMORROW, Sept. 23, at exactly 11 a.m. EDT… We just ask you to register beforehand.]

Per the bond market, we already mentioned the yield on a 2-year Treasury (4.1%) while the yield on a 10-year note is 3.7%. Yes, that’s an inverted yield curve — which has been prolonged and pronounced.

“Numerous major copper mines are playing out over the next five, eight, 12 years,” he says. “From the USA to Chile, there’s a long list of copper mines coming to the end of useful life, meaning closure and reclamation.”

Bloomberg notes: “Commodities experts have been warning of a potential copper crunch for months, if not years.” Notwithstanding, copper’s price has cratered this year because of recession fears; in fact, some of the biggest miners in the world have scrapped copper-mining plans because, to put it colloquially, the squeeze isn’t worth the juice.

However, “as the world goes electric,” Bloomberg says, “[copper] demand will increase by more than 50% from 2022–2040.” And talk about squeeze: “Meanwhile, mine supply growth will peak by around 2024, with a dearth of new projects in the works and as existing sources dry up.”

Byron adds this insider perspective: “Rio Tinto is (quietly) but aggressively working to find other sources of copper. It made an unprecedented deal with the U.S. Geological Survey (U.S. govt!) to fund a major aero-magnetic survey of Montana, looking for indications of copper deposits, with a deal for Rio to get first crack at any sweet spots for exploration.”

“The United States has championed a global minimum tax,” Biden said Wednesday at the U.N.’s General Assembly. “And we will work to see it implemented so major corporations pay their fair share everywhere — everywhere.” Everywhere, dammit!

Though the GloboTax train sputtered during the Trump administration, Team Biden is making up for lost time this year — denouncing countries undercutting each other with lower corporate tax rates.

Remember, the “GloboTax” is a 15% minimum corporate tax. And it’s the linchpin of a global scheme agreed to by representatives of 136 governments and jurisdictions last fall.

“We’re working to build a new economic ecosystem,” said Biden yesterday, “where every nation — every nation gets a fair shot and economic growth is resilient, sustainable and shared.”

The EU is threatening to boot Hungary from the European Union if the country doesn’t get onboard with the “GloboTax Gang.”

Albeit, the global minimum tax advocates claim Hungary is misaligned with, er, “Democratic values.” The National Review concedes: “It is true that Hungary’s government is far from exemplary.”

Nonetheless, Hungary has maintained its “national sovereignty and has refused to join the tax cartel concocted by Biden, Treasury Secretary Janet Yellen and the EU.”

In 2015, Mr. Francis was convicted of bilking the Navy for about $35 million in overcharges and of bribing Navy officials — with money, lavish dinners and sex parties. It’s on record as the most costly public corruption scandal in the Navy’s history.

But on Sept. 4, ahead of prison sentencing, Francis disappeared from his San Diego home. 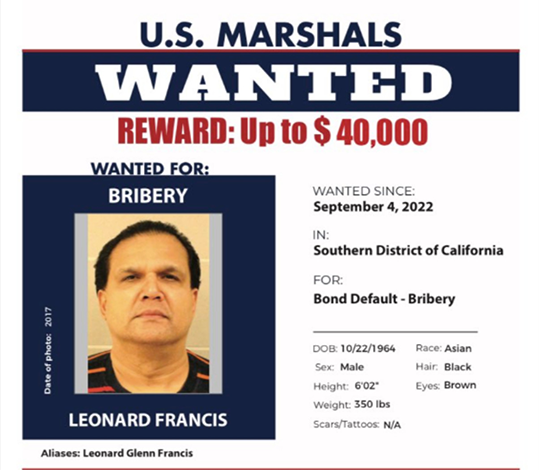 Francis was in the wind for over two weeks, until the 350-pound con man was “arrested at Simón Bolívar de Maiquetía airport by Venezuelan authorities,” the BBC says. He was attempting to flee to Russia; now, he’ll get a one-way ticket back to the States.

No word if anyone’s collected the $40,000 reward, but we’ve learned “Fat Leonard” had an alternate alias. His Navy cronies called him “Leonard the Legend” — a moniker he probably preferred.

Philadelphia Brewing Co. grows hops — which take six months to cultivate — in a next-door lot. When all goes according to plan, the hops are used to make the company’s autumn beer called “Harvest From the Hood.”

“Despite our clear signage and fenced off area, the city of Philadelphia took it upon themselves to completely destroy our hop garden,” says the brewery’s Instagram post. 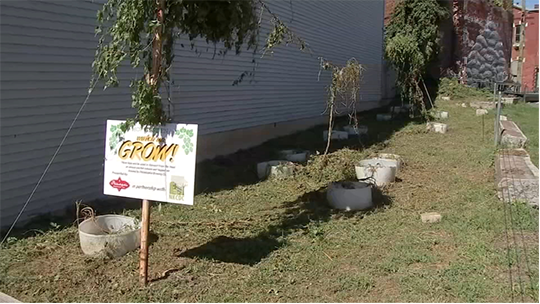 “As a result, we lost over 60 pounds of hops (and tens of thousands of dollars in projected revenue) that were to be used in our beloved wet-hopped IPA.”

A city spokesperson calls the foul-up a case of “miscommunication” but says they’re “exploring ways to rectify this situation and engaging with staff on the ground to ensure that proper procedures are followed in the future.”

A long way of saying: It’s actually better to ask permission than forgiveness…

“I keep reading about the ideas for getting around the new credit card issuers tracking firearm purchases,” a reader writes.

“Thanks for all that you do!”

The 5: Depends on the gift card. In order to activate a prepaid Visa gift card, for example, you must use personal data, including name, address, ZIP code, etc. Which would totally defeat the purpose of not landing on some quasi-watchlist.

Some guns-and-ammo stores, of course, do sell gift cards. (I smell a stocking stuffer!) But the gift card would need to be purchased with cash — not a debit or credit card.

From what we understand, it’s nigh impossible to trace this type of gift card back to an individual… which is why, for instance, gift cards have become the preferred currency of scammers everywhere.

Hang in there… We’ll be back at it tomorrow.