This just in: “Ukraine has accused Russia of causing leaks in two major gas pipelines to Europe in what it described as a ‘terrorist attack,’” BBC reports.

“Ukrainian presidential adviser Mykhaylo Podolyak said the damage to Nord Stream 1 and 2 was ‘an act of aggression’ toward the EU.” 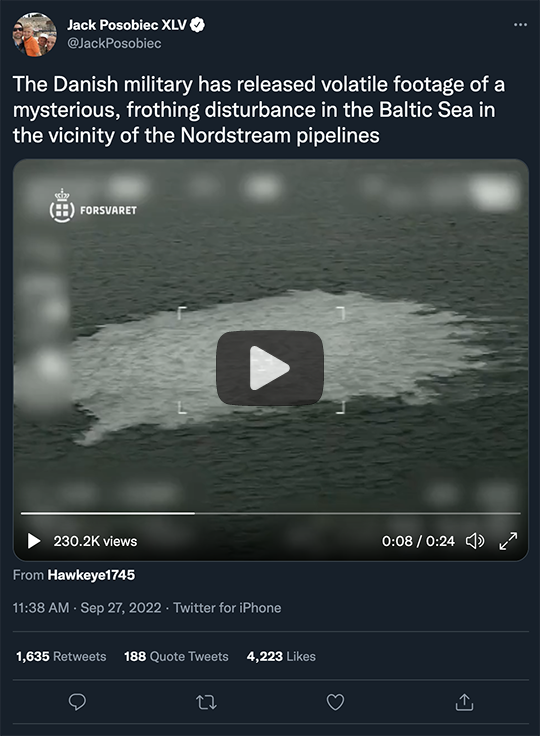 “Denmark’s Defense Command has released footage of the leaks which shows bubbles at the surface of the Baltic Sea,” BBC says, while quoting Bjorn Lund of Sweden’s National Seismology Center, who says: “there is no doubt that these were explosions.”

We’ve long followed the fates and fortunes of Nord Stream pipelines 1 and 2 — for about six years now. In fact, three consecutive U.S. presidents — Obama, Trump and Biden — tried to stop Nord Stream 2 on the grounds that Europe would become “too dependent” on Russian energy.

More recently? Well, see for yourself… 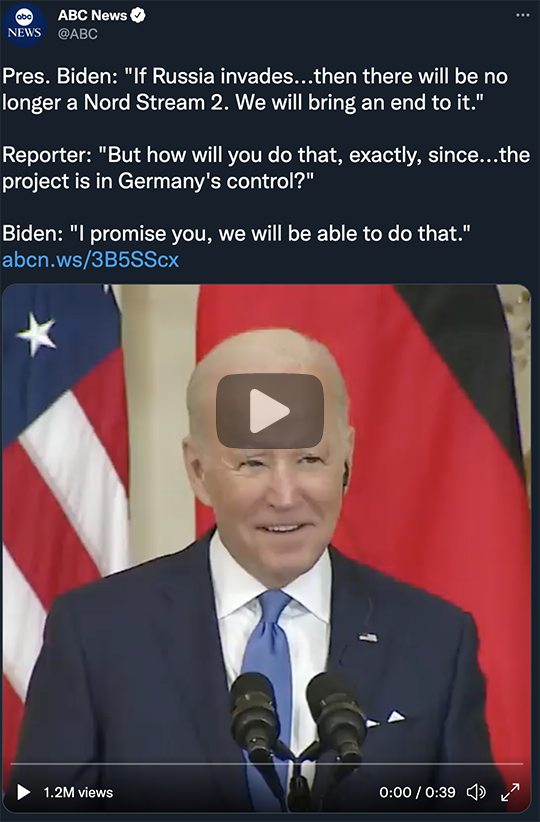 Ukrainian officials would have us believe Russian-owned Nord Stream AG sabotaged its own pipelines, going as far as to goad Germany — the primary recipient of Russian LNG — to send more weapons to Ukraine.

“Whatever the cause of the damage,” BBC says, “it will not immediately affect the supply of gas to Europe, as” — wait for it — “neither pipeline was operational.”

Chancellor Olaf Scholz has been touring the Middle East, trying to scare up oil and natural gas for Germany, which — pre-Ukraine invasion — leaned heavily on Russia for said commodities.

“But the amount of LNG so far secured by Scholz during his visit to the Gulf — starting with just one tanker in December — is tiny compared with the quantities Germany needs in order to replace the natural gas Russia has stopped supplying,” FT says.

Heh, a headline at Bloomberg is more blunt: “Germany Secures Just One Tanker of Gas During Scholz’s Gulf Tour.”

That’s assuming a single tanker will be available…

Europe’s energy crisis (and mad dash to secure oil and gas) has created a tanker shortage and led to some seriously un-green consequences.

“As the conflict in Ukraine shows no sign of ending,” Bloomberg says, “ships are carrying liquefied natural gas, diesel and crude to Europe from further away than usual to replace Russian energy supplies.”

Alongside longer (more expensive) shipping routes, there are other very un-green outcomes: “Petroleum tankers obtained at cheaper freight rates are being kept on hire — sometimes burning extra fuel… for the sole purpose of retaining the vessels.” Akin to idling a car indefinitely…

In other shipping news: “The LNG market is suffering the most… because the fleet of LNG carriers is already quite limited,” says OilPrice.com. “Also, these vessels have already been booked for the winter as shippers anticipate a spike in demand for LNG during peak demand season.”

“In addition to this,” OilPrice.com notes, “tanker building has slowed down in the past few years, further contributing to the tightness of the market at a time of a looming demand spike. This suggests a strong further upward potential for tanker freight prices, adding to energy costs for importers.”

Then, of course, Russia invaded Ukraine, and the NATO bloc thought it could bring Putin swiftly to his knees while, simultaneously, surviving without Russian oil and gas.

Yeah, this winter in Europe?

Byron King forecasts “intermittent, unreliable energy supplies that cannot support an advanced industrial economy, and — by extension — keep people who live there gainfully employed [or] basically alive, lest they freeze to death in large numbers.”

It’s similar to the proverbial frog-in-the-kettle analogy, except we’ll see how long Europe can withstand freezing temps. “What did Kermit once say?” Byron asks. “It’s not easy being green.”

Orders for durable goods — anything designed to last three years or longer — surprised to the upside, still down last month (-0.2%), but better than the consensus -0.4% anticipated.

If you strip out the volatile categories of aircraft and military hardware, you get a more revealing figure called “core capital goods” — that figure was also an upside surprise, up 1.3% versus the +0.2% economists forecasted.

For another major economic indicator today, new home sales in the U.S. soared 28.8% in August from July, according to the Commerce Department, which is down just 0.1% year over year. But there’s less than meets the eye: Much of the soaring figure can be chalked up to the statistical anomaly of “seasonal adjustments”… and the rest is the rush to beat rising mortgage rates.

Sorry if you were expecting something a little more out-of-the-box, but the numbers don’t lie…

“Over the last 50 years, income from an investment in the S&P 500 Index has far exceeded the growth of inflation over the same period,” says Paradigm’s retirement-and-income specialist Zach Scheidt. 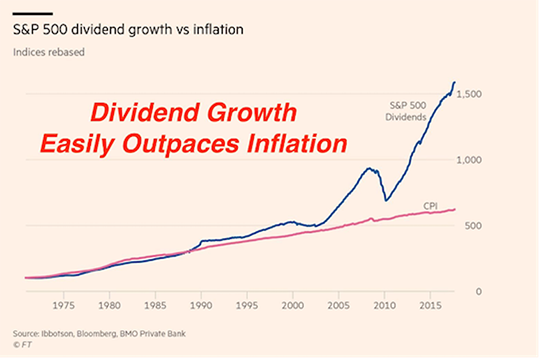 “Keep in mind that income growth comes from the entire S&P 500 index, which includes stocks that pay dividends and many others that don’t,” he clarifies.

“Imagine how much more income you would have if you focused exclusively on the companies that send payments to their investors!

“This is an important concept for today’s market when your highest priority should be protecting the value of your savings.

“Dividend stocks do an excellent job of protecting that wealth. These stocks send you real cash payments (every single quarter in most cases),” says Zach.

“And they also hold their value better than nondividend-paying stocks. That means even if the market pulls back, your investments are more likely to protect the wealth you’ve worked so hard to save.

“Better yet,” Zach adds, “dividends PLUS growth: Cheniere Energy Partners (CQP) is a natural gas-focused energy company,” he says. “Right now, the stock yields a whopping 6% and costs around $50 a share.

“The company owns a huge network of liquid natural gas (LNG) terminals, LNG pipelines and storage facilities across America. And with the world scrambling to find LNG supplies amid the Russia-Ukraine war… Cheniere’s operations are operating at full capacity.”

Zach really likes Cheniere because you earn income not only from a strong, stable dividend that’s likely to grow as energy prices rise. But you’ll also see a huge profit from its soaring shares. In 2022 alone, the stock is up 23% — and that’s before dividends.

“Bottom line: Inflation is far from dead,” he says. “But you can protect your portfolio from losing purchasing power with high-yield dividend stocks. And Cheniere Energy Partners is among the strongest of the bunch.”

[Note: This information was first published in Paradigm’s “Playbook” email last Wednesday — one of the new free benefits that every paying subscriber to a Paradigm Press publication now receives… Keep an eye out for your next edition tomorrow.]

UPDATE: The Phase 3 clinical trial for an Alzheimer’s drug will be the final proving ground for the controversial “amyloid plaque” theory.

In August, The 5 devoted our intro to the pharma scandal wherein a 2006 research paper published in the journal Nature supported the hypothesis that Alzheimer brains were replete with sticky amyloid-protein plaques. Ever since, Big Pharma has been operating under the assumption: Clear the plaques, clear the disease.

But the theory was challenged when molecular biologist Elisabeth Bik exposed researchers in 2006 who “appeared to have composed figures by piecing together parts of photos from different experiments,” according to an article at Science. In other words? A blatant case of fraud.

Nonetheless, Tokyo-based pharmaceutical company Eisai is partnering with Biogen, moving forward with its drug lecanamab. “Earlier studies suggested the monoclonal antibody treatment can clear plaques known as beta amyloid that are at the center of an increasingly acrimonious scientific debate over what causes Alzheimer’s,” the Financial Times says.

“Drugs entered the pipeline years ago when the theory had a lot more mainstream credibility,” he continues. “The industry has spent more than $40 billion since 1995, and the failure rate for disease-modifying drugs is 100%.

“Although people at smaller biotech companies were expressing doubts about the idea to me over a decade ago,” Ray says, “there is no other grand unified theory of Alzheimer’s to take its place.

“More likely is that [Alzheimer’s] is a multifactorial disease that in the future will have to be treated by multiple different drugs, depending on the patient’s profile.

“While eyes are focused on Eisai, we’ll be getting some data between now and the end of the year from some smaller biotechs like Cassava Sciences and Anavex Life Sciences, both of which have taken a very different approach to treating the disease.”

It was another pandemic-era fraud, involving a delicatessen valued at $100 billion. And the consequences are coming home to roost…

The company, Hometown International (OTCBB: HWIN), got some press last year when hedge fund manager David Einhorn spotlighted it in a client letter.

What set the company apart? It owned a single business called Your Hometown Deli in podunk New Jersey (which has since folded)… 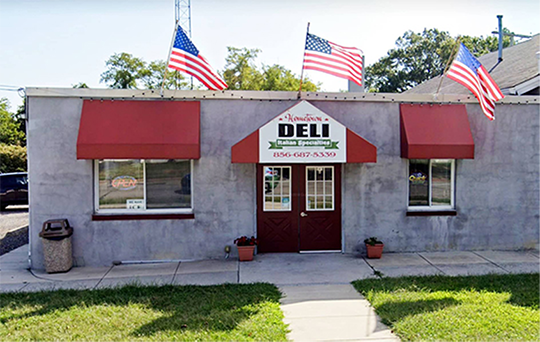 Three men — father and son duo Peter Coker Sr. and Peter Coker Jr. along with James Patten — “convinced the owners of the deli, which was established in 2014, to put it under the control of an umbrella company, called Hometown International,” says CNBC.

“In 2019, Hometown International started selling shares on what’s known as the OTC marketplace, where stock of small companies is traded.”

This week, the three men were charged with a dozen counts, including — but not limited to — money laundering, wire fraud and conspiracy to defraud investors They each face decades in federal prison and millions in fines.

“It is nice to see someone finally addressing the taxes in these United States,” a reader responds to our Saturday issue of The 5 sent on Sept. 17.

“When you look into all the taxes and fees that are added on to all goods and services like gas taxes, phone taxes, licensing fees (trades, driver, fishing, etc.) not to mention the sugar tax in Seattle tacked onto soda pop I can’t wait to see the harebrained scheme they come up with to tax electric vehicles to pay for roads.

“Thanks for getting me all riled up… Keep up the good fight.”

Our job here is done; although we hope we didn’t ruin your weekend!

Take care, and we’ll have more to say tomorrow…