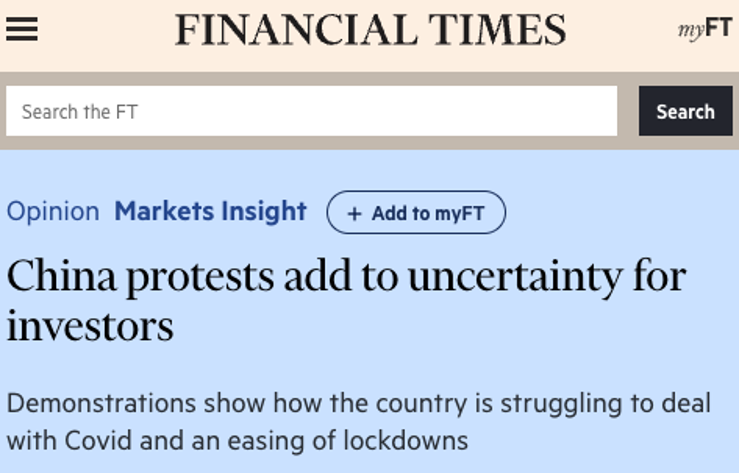 Supposedly it was the lockdowns/protests and the potential impact on global supply chains that dragged down the U.S. stock market about 1.5% yesterday.

Before we answer that question… a few words about the Paradigm Press editors and their at-times contrasting opinions.

Once in a while, we get an earful from readers about why our editors don’t always agree on one or another topic.

Our policy at Paradigm — and our predecessor firms going back for the 15 years I’ve been part of the team — is that we don’t enforce a “company line.” The last thing we want is for our editors to censor or second-guess themselves. You’ve paid good money for your subscription(s) and you deserve the editors’ unvarnished, no-holds-barred opinions.

On those occasions when their opinions diverge, we respect your intelligence enough to weigh those opinions and come to your own conclusions.

At times, we’ve even leaned into these divergences — as with our 2018 event in New York featuring Jim Rickards and James Altucher going mano-a-mano. (Our art department really outdid itself…) 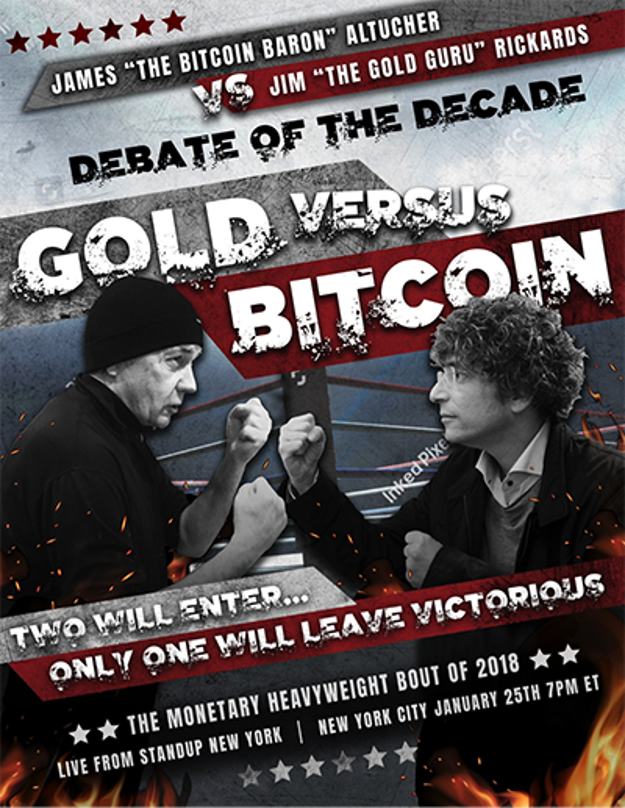 So perhaps it comes as no surprise that Jim and James disagree on the prognosis for the stock market going forward.

Read on for both of their opinions… and then we’ll reveal a step you can take that will be a winner no matter the outcome.

“My investment team and I are increasingly convinced that the end of this bear market likely occurs during the first quarter of 2023,” says James Altucher.

“As the Fed reduces its pace of interest rate hikes and companies begin reducing their earnings estimates (due to a likely recession in 2023), we’re looking for stocks to start hammering out a bottom.”

Going into the holidays last week, James told readers of his high-end stock and options advisories that “we are aggressively building your stock shopping list for what we believe will be a far more investor-friendly year.”

In contrast, Jim Rickards says Federal Reserve policy is not yet “priced in” to the stock market. Not by a long shot.

The Fed will make its next move on short-term interest rates in two weeks. At this stage, the widespread expectation is that the Fed will raise rates again — but only by half a percentage point and not three-quarters.

That’s based in large part on a speech Fed chair Jerome Powell gave on Nov. 2. “It was pretty clear,” Jim says.

As Jim sees it, the bad news hasn’t been factored in to stock prices — not with the market staging a 10% rally over the last six weeks. “Stocks will turn around and go down sharply to adjust for this new reality.” Jim’s guidance: Reduce your stock exposure, raise cash.

The good news is you can do something this week that will boost your portfolio no matter who is right — Jim or James.

While there’s much on which they don’t see eye-to-eye… they agree that a tremendous opportunity is unfolding right now in an asset class most retail investors never think about.

We’re not talking about stocks or bonds or crypto or gold. Instead we’re talking about a recession-proof niche where Jim and James are both putting their money right now. And ditto for Paradigm’s Ray Blanco. And you can invest right alongside them.

This coming Thursday night at 7:00 p.m. EDT, you’ll have the chance to “partner up” with Jim, James and Ray — thanks to a major change we’re making in our business. If you want to be among the first to know, sign up right here for this one-of-a-kind event.

Whether it’s China jitters or something else, the major U.S. stock indexes are dipping further into the red today.

Among the major movers is Apple — down another 1.8% today, whether because of the turmoil in China disrupting iPhone production or perhaps because… 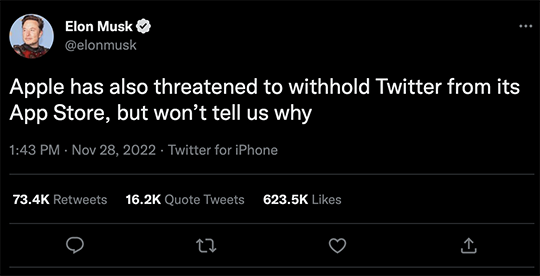 If it’s true, we’re not surprised. In recent days, some of the people who are most furious about Elon Musk’s promises to allow more free expression on Twitter — i.e., Twitter’s former “head of safety & integrity” Yoel Roth — have been encouraging Apple and Google to nuke Twitter’s smartphone apps.

➢ Musk also stirred the pot yesterday with this: “The Twitter Files on free speech suppression soon to be published on Twitter itself. The public deserves to know what really happened.” We agree… but why the tease? Why not just publish the damn files? Or submit them as a friend-of-the-court brief in the First Amendment lawsuit that the attorneys general of Missouri and Louisiana have filed against the Biden administration?

Next Monday is the day that Western governments are set to impose a price cap on Russian oil. As we’ve said before, the scheme is unworkable… but at this point European Union leaders can’t even agree on what the cap should be. Our guess is it will end up in the neighborhood of $65–70… which is lower than what Russia’s oil customers are already paying.

If that’s how events play out, the impact will be nil — and probably by design. At this stage, Western leaders probably want to look tough on the Russkies but not actually do something that would raise energy prices for their citizens.

As for the rail strike… Joe Biden is urging Congress to pass a bill that would head off the strike. Four of the 12 unions involved have rejected a proposed contract, but Congress has the power to impose the contract on the unions anyway. In the absence of any action, a strike could begin Dec. 9 — a week from Friday — mucking up 40% of U.S. long-distance cargo. [Just in: House Speaker Nancy Pelosi says she’s on board with the bill.]

The major cryptocurrencies are holding up kinda-sorta OK, despite the cryptocurrency lender BlockFi filing for bankruptcy yesterday. Bitcoin is still over $16,000 and Ethereum over $1,200.

Meanwhile, FTX co-founder Sam Bankman-Fried is still on the agenda at The New York Times’ “DealBook Summit” set for tomorrow — along with everyone from BlackRock CEO Larry Fink to Treasury Secretary Janet Yellen.

Clearly, “SBF” is intended to be a big draw — even if he’s speaking remotely from his well-defended compound in the Bahamas.

As we understand it, his interlocutor will be Times columnist and CNBC host Andrew Ross Sorkin — perhaps the most sycophantic suck-up to the wealthy and powerful in all of financial media. We can’t wait for the softball questions: “Where did all your noble intentions go wrong?”

To the mailbag: “You recently alluded to the fondness of Germans for physical cash,” writes a European reader.

“This is due to the trauma of the disintegration of the German currency after the two defeats of WWI and WWII. After 1945, cigarettes were even used as a currency.

“I grew up in Strasbourg, France, right at the German border. In 1923, the hyperinflation was so strong in Germany that on Sundays, French citizens crossed the Rhine River over the bridge and could buy all they wanted in German cake shops.

“The French franc had been hit very hard during WWI (the gold convertibility having been suspended at the war outbreak), but in comparison with the imploding German mark, it was then a strong currency.

The 5: Thanks for the additional color — especially interesting to me, given my family lineage in Strasbourg. I imagine some distant great-great uncles twice removed probably made that very excursion!

“Dave, this issue may be the most remarkable thing I have seen from you,” a reader writes after last Friday’s edition on Elizabeth Holmes and the Culture of Corruption. “All I can say is well done. You nailed it!

“Care to make a run at the medical profession? They are taught the same ‘speak with conviction’ attitude which often leads people down the wrong path.”

The 5: True enough — and I suggested as much with the broken promises of the mRNA vaccines for COVID-19.

Unfortunately, a lot of well-founded skepticism on that score has been overshadowed in recent days by the idiotic video called Died Suddenly — but that’s a discussion for another time…

“Outstanding article,” another enthuses. “Would you say narcissists have found their home in corporate business and politics?”

The 5: Dunno. Narcissists have always been among us, right? And they’re most naturally drawn to the trappings of wealth and power. It just feels more extreme right now, looking at all the wreckage the power elite have wrought for the last 40 or 50 years, no?

“Wow, thank you,” adds another.

“Like you said, come renewal time the wallet can shut. After that invigorating piece on Holmes, my wallet’s wide open for ya. Thank you for what you do.”

But if these daily missives are an extra incentive to renew whatever your paid subscription is, well, we’re mighty flattered. Thank you.

P.S. Once in a while, The New York Times gets it right.

Yesterday, the Gray Lady joined forces with The Guardian in the United Kingdom and three newspapers on the European continent — urging the Justice Department to drop all charges against WikiLeaks founder Julian Assange, awaiting extradition to the United States from a maximum-security lockup in London.

“This indictment sets a dangerous precedent,” says the open letter, “and threatens to undermine America’s First Amendment and the freedom of the press.”

Hear, hear. As we wrote a year and a half ago, “If Julian Assange is under threat, all of us are under threat.”