“I think the whole question for investors is… how long this free money stimulus is going to go on,” DoubleLine Capital chief Jeffrey Gundlach told CNBC yesterday.

Gundlach, dubbed the “bond king” in recent years, added: “As long as it goes on, I think the stock market can stay at nosebleed levels as it has been and continue to grind higher.”

So as long as Congress and the White House keep spending and pumping out new debt that the Federal Reserve can print money to buy, it’s all good. Makes sense to us.

Too bad CNBC didn’t ask Gundlach whether the looming debt-ceiling drama could mess it all up. The answer would have been enlightening.

As we’ve mentioned every so often this month, Congress suspended the debt ceiling — that is, the arbitrary limit on federal borrowing — in 2019.

It was a two-year pause. Unless Congress acts to kick the can again sometime in the next two weeks, the pause ends on July 31.

Anytime the ceiling comes back into force, the Treasury resorts to sundry accounting tricks to stay under the limit, such as borrowing from federal employees’ pension funds. But these “extraordinary measures,” as they’re known, only go so far. Eventually there’s a breaking point and Uncle Sam misses an interest payment to someone, somewhere… and there’s a default.

Not that that’s ever happened. But there’s a higher-than-usual probability of it happening in 2021. Identifying a drop-dead date is usually a matter of guesswork, and more so this time around.

From Bloomberg yesterday afternoon: “U.S. Treasury Deputy Secretary Wally Adeyemo said that determining exactly how long his agency can keep from breaching the federal debt ceiling is difficult amid the continuing impact of COVID-19 spending measures.”

So what is Congress doing?

And the opposition? “Republicans, meanwhile, appear poised to revive the debt ceiling wars they waged during the Obama administration,” says CNBC, “after four years of relative silence about the debt limit hikes passed under GOP President Donald Trump.”

Of course. Only when they’re out of power do Republicans ever find their fiscal-responsibility religion.

So events are shaping up the way they did in the summer of 2011 — when a debt-ceiling drama tanked the stock market nearly 17% in 17 days.

True, there was “divided government” back then — Obama was president, with the GOP holding the House. But here in 2021, Republicans still hold the key to any deal.

Unless Democrats want to use the “reconciliation” process to bypass a filibuster, they’re going to have to find 10 Senate Republicans to buy in.

And so begins a game of partisan chicken that could end in default and disaster. Shades of 2011.

Starting on July 22 that year, the stock market went on a steep skid — falling nearly 17% in 17 days. The government did not default… but something nearly as bad occurred: The bond-rating arm of Standard & Poor’s downgraded U.S. government debt from a pristine AAA rating to AA+.

Now… think back to that time. The stock market’s recovery from the Panic of 2008 was barely two years old. The major indexes had posted solid gains… but maybe you’d missed out on them. Perhaps you’d lost a bundle in ‘08 and you were just tiptoeing back into the market in that spring and summer of 2011.

And right away, along comes a crisis that shatters your shaky confidence. You’d probably sell in a panic, right? 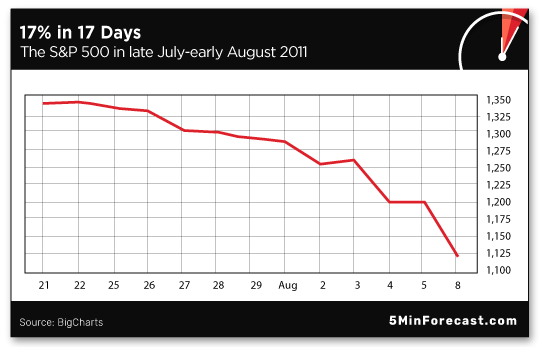 But that would have been the wrong move. The market took nearly seven months to recover those losses… but after that, the bull market that began in 2009 continued charging ahead.

We’re in a very similar moment now — not just the debt ceiling, but maybe the vibe you have about the market, too.

Maybe you’re still feeling scarred by the five-week COVID-crash of early 2020. Maybe you’re just now getting back in as you see the major indexes setting records.

You’re not going to feel too great if the market does a rerun of 2011 and takes a quick 17% tumble, will you? You’ll probably sell in a panic, right? Even if you know on an intellectual level that would be the wrong thing, your emotions would get the better of you. (Be honest with yourself — otherwise you sabotage your investment goals from the get-go.)

That’s why we’ve been pounding the table the last few months about the “disaster insurance” strategy laid out by my colleague Alan Knuckman — a strategy honed by over a quarter-century of experience in the Chicago options trading pits.

You take a tiny slice of your portfolio — as little as 1% — and lay on a “disaster insurance” trade that lets you breathe easy. In the event of a steep market downdraft, you wouldn’t panic about the paper losses elsewhere in your portfolio. Depending on how events played out, this one trade could make you 40 times your money — and significantly pad your retirement account.

You’re already privy to this strategy as a paying subscriber to The Profit Wire. Remember, the idea of insurance is that you hope it never pays out… but if it does, you’re glad it’s there.

Here’s the thing: With both houses of Congress back in session on Monday, a potential debt-ceiling crisis brings new urgency to this strategy.

Seriously, you don’t know whether Nancy Pelosi or Mitch McConnell or someone else is going to say something stupid on Monday that could instantly send the market on a multiweek slide. (Nasty bear markets have a funny way of starting on Mondays, by the way.)

That’s why we urge you to watch my one-on-one debriefing with Alan Knuckman right away. The information is fresh… but it could go stale the instant an out-of-nowhere event tanks the market. So the time to watch is now — start here.

In the meantime, however, it’s just another sleepy summer Friday in the markets.

The major stock indexes are adding to yesterday’s losses, but they’re down less than a quarter-percent each. The Dow is still within striking distance of a first-ever 35,000 reading.

The big economic number of the day surprised to the upside: Retail sales climbed 0.6% in June. The “expert consensus” among dozens of economists polled by Econoday was looking for a drop of 0.4%.

The number looks even better if you factor out volatile vehicle sales and rising gas prices: That figure jumped 1.1%, just about offsetting the previous month’s decline. All good on the “reopening” front — assuming it continues. (Uh-oh, Los Angeles County is reimposing an indoor mask mandate, even for the vaccinated.)

And now, a public service announcement — just in case you missed it yesterday. 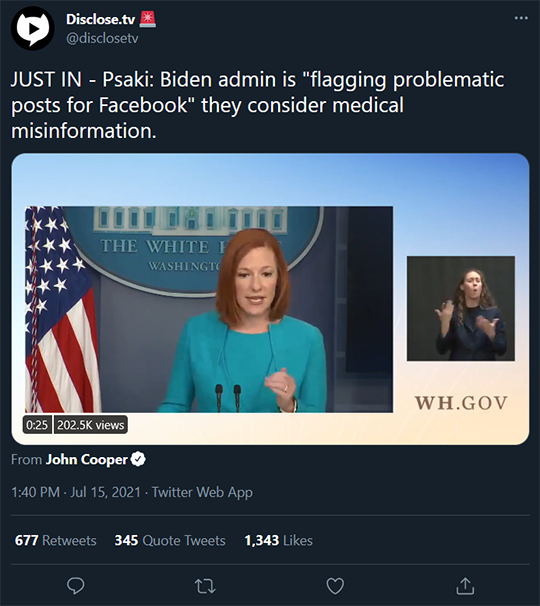 We bring up the matter not to be political… but to return to a point we made when Alex Jones was summarily “deplatformed” nearly three years ago… and again last fall when Twitter and Facebook suppressed the New York Post story about Hunter Biden’s laptop… and again this year when the “alt” social-media app Parler was throttled.

With the White House now tattling to Facebook about 12 specific anti-vaccine accounts — granted, it’s not an order, just a strongly worded suggestion — how much daylight is left between Big Government and Big Social Media?

As the Australian blogger Caitlin Johnstone puts it, “Whenever you object to Silicon Valley oligarchs exerting total control over the political speech of billions of people, mainstream liberals instantly transform into an army of Ayn Rands defending the private property rights of those companies. [This] kills those arguments dead.”

How to fix it? Sorry, policy prescriptions aren’t our bag. We’re just pointing out that anyone shrieking in this context about the “free market” — whatever his or her political persuasion — needs to stuff it.

With apologies to the columnist Dave Barry, we swear we’re not making this up… 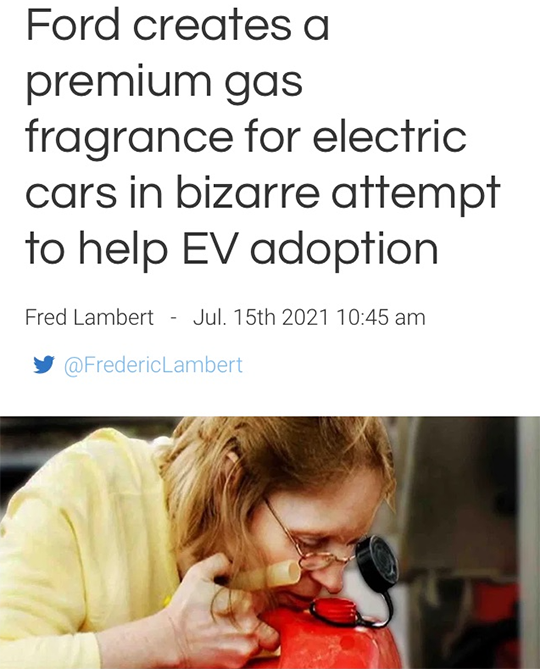 “That’s not a joke headline,” writes Fred Lambert at Elektrek. “You are not on The Onion. Ford surveyed drivers and found that most of them would ‘miss the smell of petrol’ if they go electric. The automaker then came up with a Mach-Eau (get it?) scent to help those drivers transition to electric vehicles.”

So yes, this is based on market research. But so was New Coke. (By the way, they’re reformulating Coke Zero — what could go wrong? But we digress…)

“In a Ford-commissioned survey,” says a company press release, “One in five drivers said the smell of petrol is what they’d miss most when swapping to an electric vehicle, with almost 70% claiming they would miss the smell of petrol to some degree. Petrol also ranked as a more popular scent than both wine and cheese, and almost identically to the smell of new books.”

No, it’s not for sale. It appears to be a marketing gimmick for the electric Mustang Mach-E GT. Which makes us wonder if it even exists, or if this is just an elaborate publicity stunt… 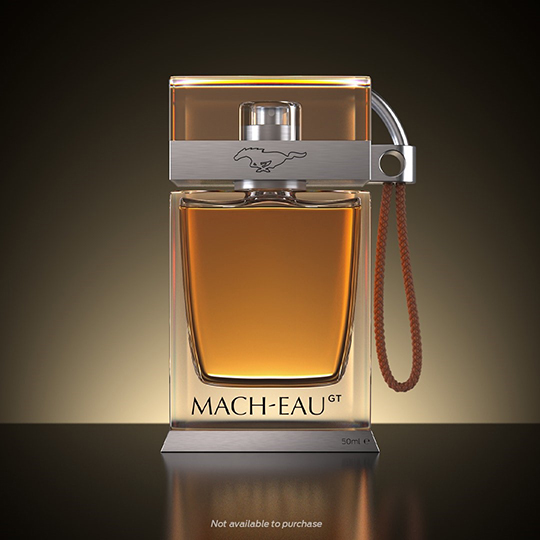 Lambert is taking it at face value: “It looks very real even though Ford says it’s not selling it.” All the same, “I would like to see the full details and methodology of Ford’s survey.”

On the subject of bank mergers, a reader writes: “That chart in yesterday’s 5 looked like a 10-plus-year-long banking tournament bracket.”

I remember the first credit card I got. This was the mid-1980s. It came from the Gary-Wheaton Bank, with a handful of branches in the Chicago suburbs.

Gary-Wheaton was soon acquired in 1987 by First Chicago. First Chicago was part of a merger in 1998 that rebranded as Bank One. And Bank One was assimilated by the JPMorgan Chase Borg in 2004.

Long credit history notwithstanding, I gave up my Chase cards years ago.

I try to have as little as possible to do with the Big Four banks these days — which is why I was bummed in 2016 when Costco gave up its credit-card partnership with American Express and switched to Citi. Sigh…

P.S. It’s not just the debt-ceiling deadline that could throw the market for a loop now that we’re in the second half of July.

Days before the July 31 deadline, the Federal Reserve holds one of its policy-setting meetings.

Investor David Roche of the firm Independent Strategy says that’s the most likely catalyst to burst a stock-market bubble.

“The most likely [catalyst] from my view,” he tells CNBC, “is that the Fed actually is forced to stop giving a double message and starts having to talk quite seriously about the days of additional monetary stimulus and financing of budget deficits [being] over.”

Note well: The Fed announcement is July 28. We strongly advise you to consider taking out some “disaster insurance” in your portfolio before then.