The “socialista” firebrand is now a “fashionista” icon… 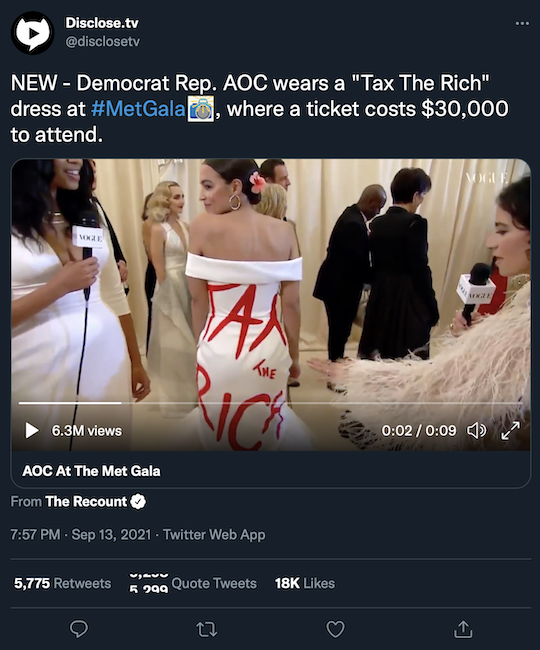 Gosh, there’s just so much to unpack here. First, notice the lack of masks and distancing at this event last night at the Metropolitan Museum of Art in New York. (Other photos, however, show the servants were masked. How creepy and classist is that?)

More to the point, however, the heel turn of Rep. Alexandria Ocasio-Cortez (D-New York) is now complete.

Nearly six months ago, we took note of how AOC had begun abandoning her commitment to “democratic socialism” in favor of the “woke fascism” that now animates the American power elite.

By hobnobbing with the elite last night at the Met, her transformation is well and truly fulfilled.

The “Tax the Rich” message on the back of her Aurora James-designed dress? That’s just catnip to keep her still-adoring followers in line… 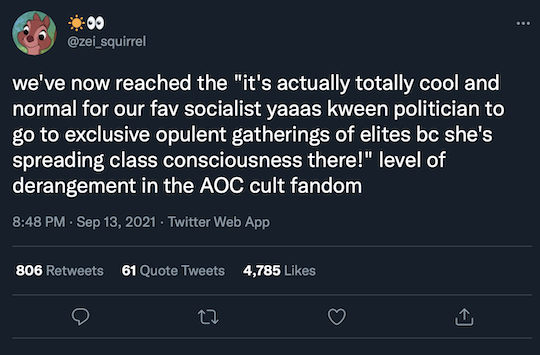 Performative socialism, as it were — imagery and sloganeering to make her fanboys and girls forget, at least for a moment, about the medical debt and student debt driving them into penury.

All of which brings us to the Democrats’ latest tax plan… which it turns out isn’t nearly as awful as the previous ones.

We’ve mostly held our tongue on this topic all year — simply because there was no telling what the particulars would be, and thus no point teasing out the impact.

Now the pols are getting down to the nitty-gritty. “The House Ways and Means Committee’s proposal to pay for trillions in social spending leaves wealth gains and inheritances largely alone,” says this morning’s New York Times. “It focuses instead on a more traditional target: income.”

We’re not surprised. As we’ve said for over a decade, most recently in June, the ultra-wealthy can easily skirt income tax by borrowing against the wealth they’ve built in their companies. They live in opulence even as they book next to nothing in W-2 income like us peasants.

Anyway, some of the highlights, or lowlights as the case may be…

The good news is that the single-worst thing on Joe Biden’s wish list is absent from the House proposal… which means it might be dead and buried.

Under the present tax code… once you meet your maker, your appreciated assets are not taxed as capital gains. Nor do your heirs have to pay capital gains tax unless they sell. And if they do, they owe tax only on the gains after your death.

Biden wanted to tax appreciated assets at death as if they’d been sold.

That would be devastating for small-business owners and farmers. In many cases, it would guarantee that heirs wouldn’t have the ready cash to pay the taxes… and they’d have no choice but to sell out to giant corporations.

Somehow, this awful proposal was dropped from the House plan.

This is the requirement that banks and payment providers like PayPal report annual account inflows and outflows to the IRS.

The aim was to track down unreported business income — basically, anything that doesn’t show up on a W-2 or 1099 form. Here, too, small-business owners would have taken the brunt — going under the IRS’ microscope for allegedly inflating deductions or under-reporting revenue.

But this provision, too, has been dropped.

Granted, it’s still comparatively early days. The Senate will have its own bill, and then the two will have to be merged into one. But from a small-business standpoint, the state of play is actually better this morning than it’s been all year.

Speaking of small business, the overall mood is picking up a bit — at least going by the National Federation of Independent Business’ latest report.

The NFIB’s monthly Optimism Index is back above 100 — still not great by 2017-2019 standards, but pretty darn good compared with the early years of the post-2008 recovery. 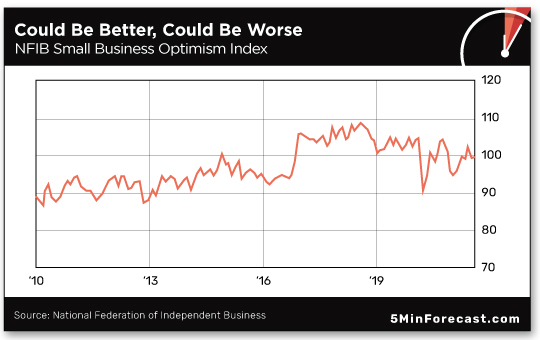 Good help is as hard to find as it’s ever been. Asked to cite the single-most important problem they face, 28% of survey respondents cited “quality of labor” — a record high in the decades-long history of this survey.

But the big economic number today is inflation — which is indeed starting to level off. Whether you want to call it “transitory” is another question altogether, heh.

The consumer price index jumped 0.3% in August, which works out to a year-over-year increase of 5.3%. That’s down from the previous month’s 5.4%.

Even the real-world inflation rate from Shadow Government Statistics — measuring inflation honestly, the way the government did back in the 1970s — is plateauing at 13.2%. (That’s still sky-high, comparable to 1980 levels.)

So our Jim Rickards’ forecast bears out — slowing inflation for the balance of 2021 before it picks up again next year.

Gold popped as soon as the inflation number was released this morning — clambering back above $1,800.

Not to worry, says our floor-trading veteran Alan Knuckman. The tell, he says, is the outlook for short-term interest rates set by the Federal Reserve: “Rates remain near zero until December 2022,” he tells us — with three increases of a quarter-percentage point each during 2023.

Conclusion? “Money is cheap and stocks still are the choice for yield. This rally run has seen repeated stock shakeouts while coming back to new higher highs and continuing the record climb every time.”

“The dirty little truth is that very few of us are yet getting 5G,” says our tech maven Ray Blanco about the oh-so-hyped next level of mobile service.

“While the wireless companies have incorporated some 5G technology, they aren’t ‘real’ 5G. Full-blown 5G communications require the use of more than just improved 4G technology and frequencies, but in addition new frequencies and technologies most of us wireless users haven’t seen yet.

“Rolling out true 5G is requiring a lot of investment in infrastructure. Moreover, many billions have been spent on new spectrum that is being repurposed from older applications like satellite-based TV. The auction took place last December, but the transition away is taking place this year.

“Early next year, the major wireless carriers in the U.S. will be able to begin to turn these frequencies on with their new equipment, providing much faster speeds and even, potentially, broadband service that’s better than what some wired carriers are giving us today.”

But while the buildout has been slow, it’s been nonetheless profitable for Ray’s Technology Profits Confidentialreaders: On Friday he urged them to take 54% profits on Nokia and 84% on Crown Castle International.

Want to know what’s big on Ray’s radar now? Check this out.

“Dave, as a freedom-loving Navy veteran of 25 years, your ‘tribute’ to 9/11 was most insightful,” a reader writes.

“I pray every American will read, understand, and act upon its meaning.”

But it’s the unintended “Part 2” of our reflections on how emergencies become permanent — 9/11 and COVID are of a piece that way — that prompts the bulk of our mailbag section today.

“Another issue not addressed with Biden’s vaccination decree is the natural immunity of those who have already contracted COVID.

“Not a word on that in the OSHA directive to businesses. Why not test for immunity first? Is it really easier to impose continuous testing?

[No, but it’s surely more profitable for the testing providers. Go on, though…]

“I have a friend who got COVID a while ago and will not get the vaccine for a variety of reasons. As a government contractor he may be required to get the vaccine or lose his job. No consideration that he already has natural immunity.

“This is not only an abuse of presidential power but completely unreasoned for a large group of Americans. There are also documented cases of any mention of natural immunity being disappeared from social media.

“Great analysis of the excessive growth of presidential power unchecked by Congress. Love The 5. 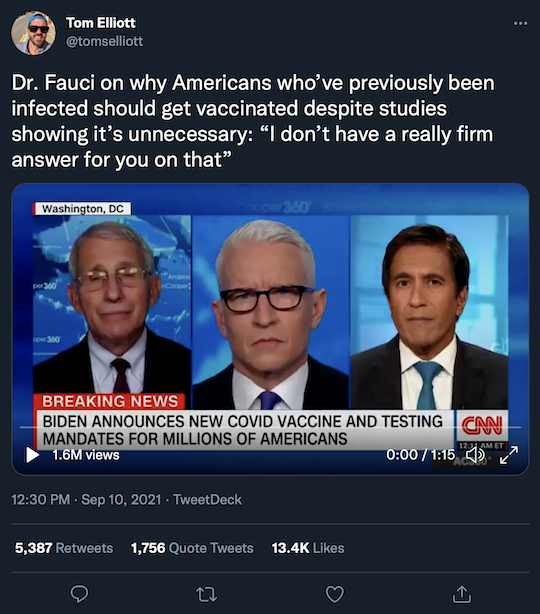 “Must say I disagree with your concerns on the mandate,” says a counterpoint.

“Look at the rising rate of infections, and the vaccines never promised ultimate protection. With as many deaths incurred it is a war and we are losing.

“Just had a breakthrough case or two close to me and an unvaccinated source was the cause. My time has been turned upside-down because of it and I am vaccinated.

“I get the concerns, but wonder how you feel about polio or rubella vaccinations.”

The 5: We sympathize with your predicament, but the virus is being spread by the vaccinated and unvaccinated alike. And what’s the likelihood that forcing the vaccine on one and all will result in the nirvana of “Zero COVID”?

Besides… if you’re not going to draw a line with bodily autonomy, where do you draw it?

“I did not vote for Trump and am fully vaccinated,” a California reader writes to preface the following remark: “I am voting today to recall the govenor.

“The recall is a California recall not the Republican recall that the carpetbagger Democrats on TV and the media say it is. It has nothing to do with Trump.

The 5: If Newsom survives the vote, will he celebrate at the French Laundry in Napa?

“I meant to save it, but inadvertently discarded permanently! I want to keep Dave’s assessment of the vaccine mandate for sharing with others. If there’s any way to resend, or link me to a web posting, I’d appreciate it!”

This is as good a time to remind you that our back issues are housed at 5minforecast.com. Our voluminous archives, going back to 2007, can be found there. Enjoy!