“The last PDAC conference was in March 2020 just before the world shut down for COVID,” Byron King says. “Over two years later, we all came back together again — with around 20,000 attendees.”

For an update from the Prospectors and Developers Association of Canada (PDAC) in Toronto, we turn to energy, mining and precious metals expert Byron King.

“PDAC was packed with exhibitors, many of whom were unable to secure space for booths,” he says. “And packed with investors too, who wanted to hear about the latest and greatest developments in the mining space.

“[It’s] a long way from the PDAC doldrums of, say, 2015 or 2016 when many investors had zero use for mining.” Today? “Money is flowing into the sector,” Byron says. “Checkbooks were open, and I heard many tales of ‘oversubscribed’ fundraising efforts.

“Meanwhile, much of that new money is coming from what people are taking off the table elsewhere in the market,” he notes. “While the so-called FAANG stocks have shed value… at least some of that cash is moving into mines and minerals.

“I call it the shift from vaporware — meaning those sorta ‘tech’ plays — into ‘mass’ plays,” says Byron.

“Money is moving to people and plays that literally move mountains for a living,” he says. “It’s time to look at companies… that [take] raw material and transform it into materials that truly build the world.

“One key focus at PDAC was the term ‘critical’ as applied to minerals and materials,” Byron notes. “It’s a broad category,” but essentially includes the “‘critical minerals’ lists published by the U.S. government, as well as Canada, Australia, Japan and just about every European nation with an industrial base.”

“The term ‘critical’ pertains to elements on the periodic table such as rare earths (REs), several of which are indispensable in making the strong magnets that form the working guts of an electric vehicle (EV) traction motor,” explains Byron.

“And there are many other so-called battery metals: copper, nickel, lithium, manganese, vanadium and more.

“Plus a wide range of… exotic metals as well, all of which are necessary for modern life as we know it,” Byron says. “For example, out of 92 naturally occurring elements in the periodic table, 63 elements are inside your smartphone (depending on the make and model, of course).

“Consider the element indium, applied as a paste on the back of your smartphone screen. Indium is why you can touch the screen with your finger and create an electrical connection to circuits below,” he says. “But most indium comes from zinc refining, and zinc refineries are few and far between outside of Asia, especially China.”

Which leads to one of Byron’s conclusions from the PDAC conference: “When so much new technology uses advanced metals and materials,” he says, “policymakers around the world are worried about how to keep entire economies afloat.

“If a country does not produce something internally, then it must import the material,” he says. “Securing friendly supply sources is key.”

To the market, where the three major U.S. indexes are in the green today…

Crude’s in a slump — down 3.6% to $105.47 for a barrel of WTI — on word that Biden will “ask Congress to greenlight a three-month suspension of the 18.4 cents per gallon federal tax on gasoline and call on states to suspend their fuel taxes,” CNBC reports. This as Biden’s approval rating has sunk to 39%, according to Rasmussen Reports.

“A one-two punch of high prices and rising interest rates is what has so many investors steering clear of homebuilders,” says our retirement-and-income maven Zach Scheidt.

“I’ll admit this combination sounds rather grim. I also can’t say that investors’ fears are completely unfounded,” he adds.

“It’s true home prices have moved sharply higher, which could lead to fewer potential buyers, but rather than writing off homebuilders altogether, let’s look at why home prices are rising.”

Most notably? An influx of millennial homebuyers, the exodus out of U.S. cities and a low-interest-rate environment. Plus: “There wasn’t sufficient inventory of homes to meet this demand,” says Zach.

“It takes a while to find lots, get building permits, develop the land and then build a home,” he says. “So the inventory shortage lingered, causing bidding wars, which supported higher home prices.

“It’s not that people don’t want to buy houses,” Zach asserts, “it’s that there aren’t enough homes for sale.

“According to a study released late last year from Realtor.com, 12.3 million new households were formed in the U.S. over the past decade,” he says. “But only 7 million homes were built during that time.” Meaning, there could be a 5 million inventory shortfall, give or take.

“The shortage of homes means that there should always be multiple buyers looking to purchase. And that indicates reliable profits for homebuilders for years to come.”

And Zach notes: “As new buildings get completed, home values should begin to stabilize and prevent more buyers from getting priced out.

“Although mortgage rates are rising, historically speaking, they’re still quite low. And they’re likely to stay that way for at least another year or two.

“Meanwhile, there are some important shifts taking place that very few people are talking about…

“Many long-term investors are now betting that the Fed will actually have to cut rates in the next two years as inflation subsides,” Zach says.

“Since the market anticipates what will happen a year (or even several years) from now, mortgage rates have started to stabilize and even pull back in some cases,” he says. “That’s good for mortgage rates and home affordability.

“But the negative sentiment toward homebuilders on Wall Street has been especially unkind to this misunderstood area of the market,” says Zach. “In most cases, these stocks trade for eight, six or in some cases even less than five times expected earnings for the next year.

“That’s an extremely cheap price for profitable companies,” he mentions. “At the same time, many homebuilder stocks now pay lucrative dividends. So you get paid while you wait for these stocks to trade back up to more reasonable prices.

“To borrow a real estate metaphor, current valuations make housing stocks look like the worst home in a bad location. But these stocks are more like a cheap home in an up-and-coming neighborhood.”

Zach’s takeaway: “Homebuilders are actually setting up for what could be a multiyear rally.” A word to investors? “Let’s put ourselves in a place to profit ahead of the homebuilder rebound.”

Out of respect for Zach’s paid subscribers at Lifetime Income Report, we’ll keep his recommendations under wraps. But keep watching this space for more updates on homebuilder stocks…

“I’m going to find out what the hell the FBI did and I’m going to expose it to the world,” says Dennis Parada — half of the father-son treasure hunting team Finders Keepers LLC.

We’ve talked a time or two about this duo who claim they led FBI agents, in 2018, to the site in Dent’s Run, Pennsylvania, where a shipment of Union gold — on its way to the U.S. Mint in Philly — was waylaid in 1863.

After which, according to Finders Keepers, the feds spent the night excavating about 9 tons of gold, but officially telling the treasure hunters to go home, nothing to see here.

Since then? “The treasure hunters have… bombarded the government with legal motions and Freedom of Information Act requests,” says a feature article at The Atlantic. “In May, the FBI released the first 1,035 pages, which included some historical research, the data from the promising geophysical scan and many, many photos from the excavation.”

But for whatever reason, the FBI is doling out records in dribs and drabs, “petition[ing] to delay releasing any video evidence until August, and thereafter only at a rate of 15 minutes’ worth a month.”

And the plot thickens: “The treasure hunters have found multiple witnesses who believe they saw armored trucks in this period,” The Atlantic says, “either parked for hours in nearby communities or traveling in convoys along nearby routes, and there were also periodic closures of the main route in and out of Dent’s Run.

But if the feds managed to extricate 9 tons of gold, what happened to it thereafter?

Dennis Parada has an intriguing theory — and it’s connected to a story we reported in March 2018 when gold and silver bars literally dropped out of a plane’s unsecured cargo hatch in Yakutsk, Siberia.

“Nine tons of gold disappeared from Dent’s Run, Dennis said, ‘and within 48 hours, an airplane in Russia dropped 9 tons of gold on the runway.’” 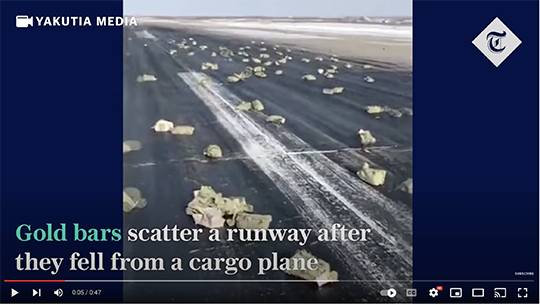 The Atlantic further outlines Parada’s theory: “[The FBI] could have secretly shipped it to Russia, pretended it had been dug out of a Russian gold mine and brought it back into North America.

“Absurd? Probably. But the runway incident is a real one. On March 15, 2018, two days after the [Dent’s Run] dig began, a plane in Siberia lost 3.4 tons of its 9-ton cargo of gold and silver.” (There’s even a YouTube video documenting the event.)

Ultimately, how will things pan out — no pun intended — for Finders Keepers, and what exactly are they looking to get out of their quest for the truth? While they say they’re not motivated by money, the treasure hunters believe a finder’s fee of 10% of the Dent’s Run haul is fair… or “at the low end,” around $60 million.

A penny for your thoughts on this bizarro pic… 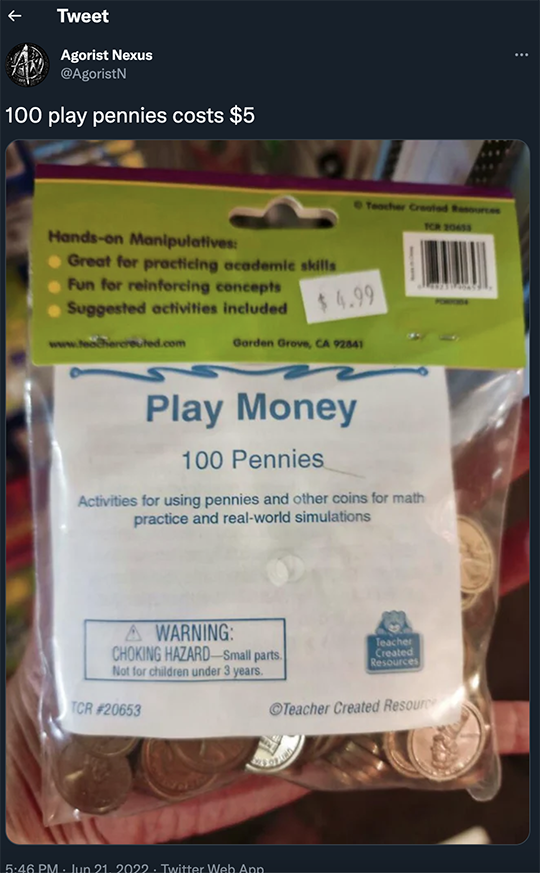 One hundred fake pennies — with a retail price of $4.99 — appear to be a teacher’s aid. While we’re all for hands-on learning, this seems absurd! Or as one wag on Twitter observed: “Play money is literally worth more than your fiat. Let that sink in.” (Also, made in… ?)

But there’s more: Just for kicks, I went on the seller’s website in search of the play pennies, only to find the exact same item now costs $5.99. Inflation. Let that sink in.

We’ll be back tomorrow; until then, take care!