Who says there’s no bipartisanship in the new Congress?

On Tuesday, the House voted 365-65 to form a new select committee taking aim at all things China — trade, military, the works. It will consist of nine Republicans and seven Democrats.

The chair will be GOP hawk Mike Gallagher from Wisconsin — who tells Politico, “I believe China and Russia have been waging a new Cold War against us for the better part of a decade.”

For his part, House Speaker Kevin McCarthy says he would “love” to visit Taiwan — a follow-up to the provocative visit by his predecessor Nancy Pelosi last summer.

A year ago tomorrow — as Paradigm’s Jim Rickards was already anticipating a Russian invasion of Ukraine — he suggested three defense names here in The 5.

Lockheed Martin is up nearly 30% since, while Raytheon and Leidos are both up 10%. A darn sight better than the S&P 500’s 18% loss. Probably more where that came from, no?

Another bipartisan venture we’re eyeing in 2023 — and this one’s totally flying under the mainstream radar — is Social Security reform.

We can imagine your reaction at the mere suggestion. What? With all the acrimony in Washington? With Democrats always eager to say the GOP wants to “slash” Social Security? Forget it!

We get it. But as we’ve said many times before… the fact is that major Social Security reforms take place under “divided government”:

And the urgency is there, no doubt: Official estimates project the Social Security trust fund will be depleted in 2034 — at which point benefits would have to be cut by 20–25%.

The outlines of an agreement are already in sight — some combination of tax increases and a higher retirement age.

Democrats have drafted Social Security legislation for several years now. It leans mostly on tax increases without raising the retirement age. One of the proposals included slowly raising the payroll tax from 12.4% to 14.8%.

All of the proposals included taxing a greater percentage of high-earners’ incomes. Under the current system, income you earn over $160,200 is not subject to payroll tax; the number is adjusted for inflation each year.

The Democrats’ plans would reimpose payroll tax over $400,000. And with that annual inflation adjustment, the “doughnut hole” would disappear over time and all income would be subject to payroll tax. No, those increased contributions would not translate to increased benefits — which totally upends the original bargain designed by Social Security’s architects in the 1930s, but there you go.

Republicans, on the other hand, usually talk less about tax increases and more about raising full retirement age. The chatter around D.C. is age 70.

So the compromise here is easy: Dems get some of their tax increases, and the GOP gets a higher retirement age, but not 70.

We’ll keep an ear to the ground throughout the year. There probably won’t be a deal until there’s some sort of resolution to a looming debt-ceiling showdown this summer. But that’s a story for another day…

To the markets, which are all about the inflation numbers.

The wonks at the Bureau of Labor Statistics issued the December consumer price index this morning. It registered a 0.1% drop month over month — which sounds “meh” on its own and it’s even more unimpressive when you realize the decline was driven almost entirely by falling gasoline prices.

The year-over-year inflation rate climbed down from 7.1% in November to 6.5% in December. That’s the lowest in more than a year… and it marks six straight monthly declines.

Both the monthly and yearly figures are in line with what the Wall Street consensus was expecting. In other words, they were already “priced in” to the stock market.

It’s the commodity space that’s rallying instead: Crude is up another $1.49 at $78.90, highest in over a week. For whatever it’s worth, both Goldman Sachs and ING anticipate a return to $100 sometime this year — thanks to both lower Russian supply and higher Chinese demand.

Speaking of precious metals, we see our Zach Scheidt’s forecast of $3,000 gold this year is getting a bit of social media buzz. Friend of The 5 Jeff Clark — who performs top-notch research for our affiliated precious metals dealer Hard Assets Alliance — compiled more than a dozen gold forecasts from various experts… 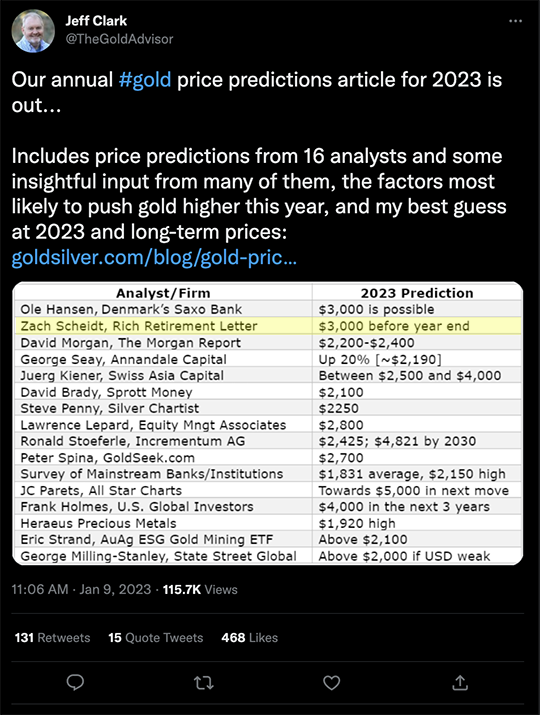 Meanwhile, not much movement in crypto — but Bitcoin has crested the $18,000 mark for the first time since the FTX meltdown in November. And Ethereum is only 15 bucks away from $1,400. 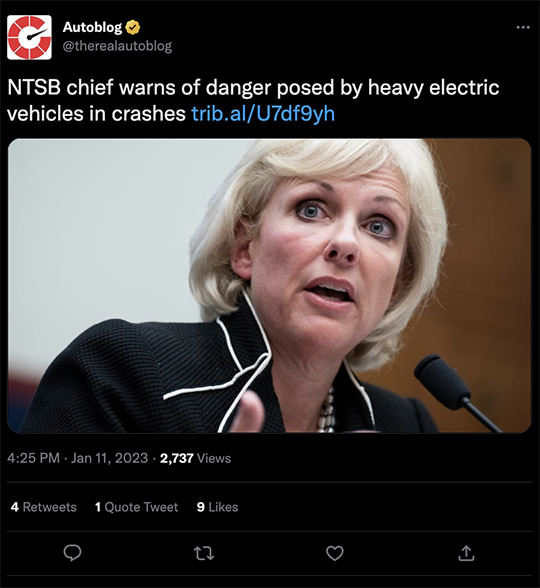 Jennifer Homendy, head of the National Transportation Safety Board, delivered a speech in Washington yesterday. The upshot is that she’s worried about heavy electric vehicles colliding with lighter vehicles — even citing the hypothetical example of an electric GMC Hummer (9,000 pounds) slamming into a conventional Honda Civic (2,900 pounds).

The climate-change crowd can’t evade the laws of physics: EV batteries make EVs heavier. And the more range you want, the heavier the battery.

“We have to be careful,” said Homendy, “that we aren’t also creating unintended consequences: more death on our roads.”

Interesting. On the Paradigm editors’ weekly conference call yesterday, energy specialist Byron King speculated we might be at “Peak Green.”

That is, despite all the energy insanity we chronicled in yesterday’s 5, there’s a growing sense among everyday folks and even a handful of government officials that some of the most ambitious green initiatives simply aren’t feasible — not if the idea is to maintain a first-world lifestyle.

Meanwhile, for our daily foray into financial “quirk,” we follow up on our lead item yesterday with some quality memeage. The first one here was spotted by Paradigm editorial chief Chris Harris… 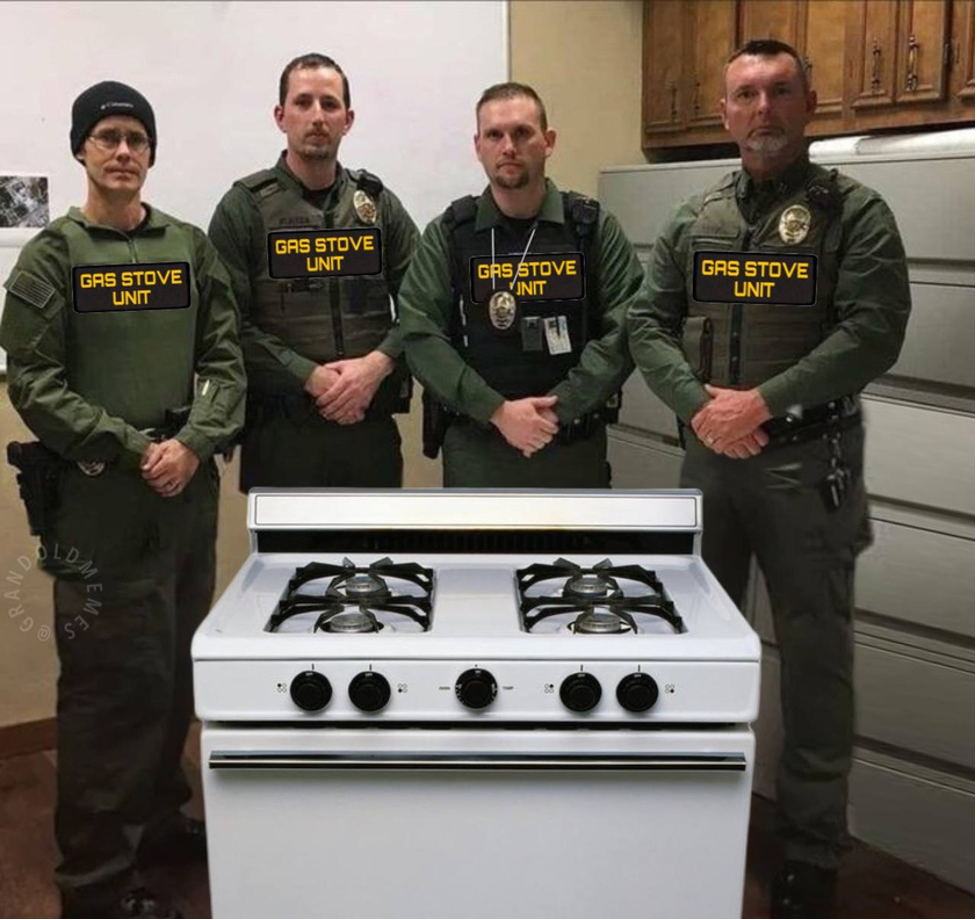 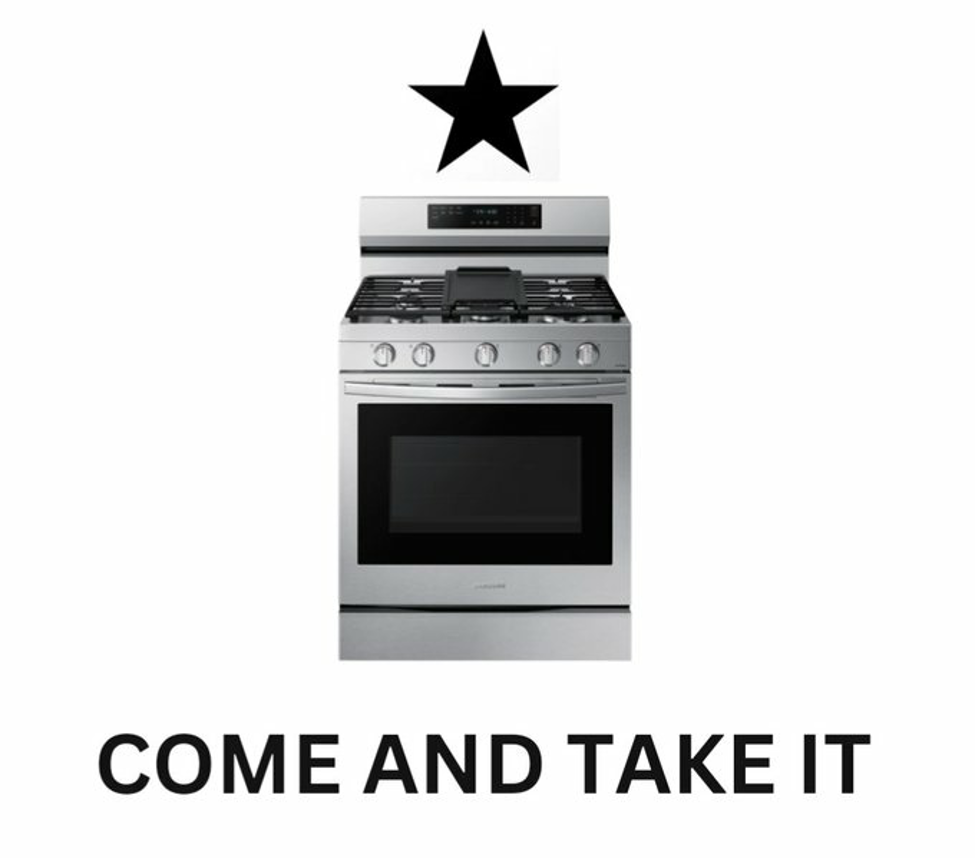 Anyway, the Consumer Product Safety Commission has “walked back” the proposal to ban gas stoves. “I am not looking to ban gas stoves and the CPSC has no proceeding to do so,” says CPSC chair Alexander Hoehn-Saric.

So as we suggested, it was a trial balloon that could be shot down if subjected to too much mockery. Good to know for future reference…

“Thank you,” a reader writes, “for pointing out that starting in 2024, workers earning over $145,000 will have all their catch-up contributions go into a Roth account (as taxable income).

“It occurs to me that the government, by taxing such income prior to the catch-up contributions being deposited into Roth accounts, is insulating itself from account holders’ investments potentially losing value and ‘robbing’ the government of future tax revenues.

“As you know, retirement account balances can experience significant shrinkage due to stock market declines (here’s looking at you, 2022!). However, the government will not feel the pain of any Roth account losses realized as they will have already taxed the full catch-up contribution amount, which they do not do with regular, non-Roth 401(k)/IRA catch-up contributions.”

The 5: When you put it that way, it’s almost as if the powers that be are expecting a crappy 1970s-like decade for stocks.

Anyway, thank you for raising an excellent point that didn’t occur to us. We really do have the sharpest readership among the vast universe of e-letters out there!

We also got some interesting correspondence directed to Paradigm’s VP of publishing Doug Hill.

As you might have seen in your inbox, Doug has been pounding the table this week for a one-of-a-kind asset class we like to call “partner shares.”

The reader wrote in to… apologize… for not biting on Doug’s pitch.

“You and your assistants,” he writes, “have made a valiant effort to encourage me to join you in investing together. I owe you an explanation for my noncompliance.

“I am not an investor. I subscribe to several financial newsletters for their writers’ views on the state of the world, i.e. the true news.

“These days all the mainstream media are completely untrustworthy, being the puppets both of their advertisers and of the government. So any ‘news’ they broadcast/print is usually not worth reading.

“Financial newsletters, on the other hand, do not owe allegiance to anyone but their subscribers, so I find their information much more to the point and trustworthy. The price of subscriptions to financial newsletters is worth the straight insight I get into the world today. Thank you.”

The 5: No apologies necessary, sir.

As I’ve said for a few years now, financial newsletters were the original “alternative media,” many decades before the internet came along.

You’d be surprised at the number of people like yourself, who don’t act on the investment advice. A long time ago, years before I got into the business, I was one of them.

There’s value both in feeling as if you’re getting “the straight insight” you won’t find elsewhere… and in feeling a sense of community with your fellow readers, an appreciation that you’re not alone in a world that all too often seems as if it’s going off the rails.

Anyway, thank you for your patronage. We appreciate it, no matter how many or how few of our publications you choose to subscribe to.