A curious narrative is taking hold in the mainstream.

Seeing how the financial newsletter biz was the original “alternative media,” you might think we’re going to debunk the narrative today. Not so. We’re not saying it’s wrong — just curious.

On the heels of the market’s best week in three months, Saturday’s Wall Street Journal said “investors welcomed signs pointing to a decisive result in next month’s U.S. presidential election.” 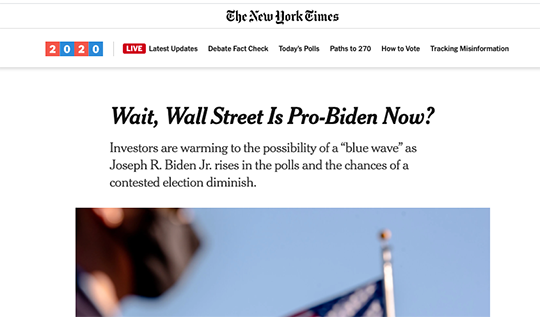 The Gray Lady betrays a short memory with that headline. Much as Wall Street welcomed Trump’s corporate tax cut, the really big campaign money leans Democrat. During the 2016 cycle, we mentioned how nine of the 10 biggest donors gave to Hillary Clinton. (Home Depot’s Bernie Marcus was the 10th.) Among donations of $1 million or more, Clinton collected $180 million — compared with Trump’s $33 million.

But in any event, the Times suggests a Dem sweep of the White House and Congress “represents the best chance to get another large injection of federal money into an economy that continues to struggle.”

Back at the Journal, meanwhile, we see ETFs specializing in renewable energy are up 80% or more this year, “partly because investors are betting they stand to benefit from presidential candidate Joe Biden’s green-energy proposals.”

With the foregoing as context, we can’t help wondering if there’s a 2020 version of the “Froman email” floating around Wall Street in New York and K Street in Washington.

We told the story last year during an expose of how the deep state has been pulling strings not just during the Trump administration, but going back to the earliest days of the Cold War. It’s worth revisiting today, in a bit more depth.

Maybe you’ve never heard of him, but Michael Froman is a senior card-carrying member of the power elite.

He’s a protégé of Robert Rubin, following Rubin from the Clinton Treasury Department to Citigroup and now the Council on Foreign Relations. Along the way, he was U.S. trade representative during Obama’s second term. 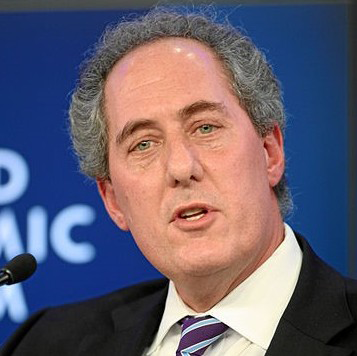 Froman at Davos (of course) in 2012. Any guesses how much he pays for a haircut? [World Economic Forum photo]

Right around this time in 2008, Froman wrote an email that eerily anticipated the makeup of Obama’s Cabinet and senior aides.

The email was addressed to John Podesta, soon to become co-chair of Obama’s transition team. (WikiLeaks made it public during its dump of Podesta’s emails four years ago, when he was chairman of Hillary Clinton’s campaign.)

The subject line is “Lists.” Wrote Froman: “These are the names to date that seem to be coming up as recommended by various sources for senior level jobs.”

The email was prophetic: Rahm Emanuel as chief of staff. Eric Holder as attorney general. Robert Gates staying on from the Bush administration as defense secretary. Three names were floated as Treasury secretary — including the one who got the job, Timothy Geithner (another Rubin acolyte).

“This was Oct. 6. The election was Nov. 4,” wrote David Dayen at The New Republic. “And yet Froman, an executive at Citigroup, which would ultimately become the recipient of the largest bailout from the federal government during the financial crisis, had mapped out virtually the entire Obama Cabinet, a month before votes were counted.”

All that said, the mainstream narrative about 2020 and Wall Street might be flat-out wrong — not just curious.

In late July our Jim Rickards explained the one “tell” pointing to a Trump victory, polling data and betting markets be damned.

It’s the difference between a pollster asking, “Who do you plan to vote for?” and “Who do you think will win?”

When the answers diverge, it’s the latter question that’s actually a better predictor of the outcome. Over the summer, Trump had the upper hand on that question.

And he still does: A Gallup poll released last Wednesday — post-debate, post-COVID diagnosis — finds 56% expect Trump to win, and only 40% say Biden.

Assuming it’s a decisive outcome, we imagine Wall Street would welcome that, too. The two parties aren’t that far apart on a new “stimulus” package, political theater notwithstanding. (Probably wouldn’t want to be long renewable energy, though — heh.)

But a muddled outcome? As we said on Friday in a reprise of our Aug. 6 edition, precious metals would be the go-to asset class.

To the markets, where earnings season looms.

JPMorgan Chase will be the first of the Dow 30 stocks to report tomorrow. “Earnings reports will soon dominate the financial news as countless speculators attempt to play the numbers,” says Greg Guenthner of our trading desk.

And every quarter, he gets the same question from novices: The earnings were strong! My company beat expectations! But shares are down – what happened?!?

Reality check: “Beating earnings-per-share estimates by a penny or two,” says Greg, “is not a guarantee that the stock will soar.

“You must remember that the market is forward-looking. But earnings are simply a snapshot of past performance from the prior three months. When you bet on a stock, you’re betting on its future potential. You’re effectively making a prediction as to how the company will perform in the months and years ahead — not last quarter.”

In the meantime, the major indexes are adding to last week’s gains on one of these weird holidays when stocks are trading but the banks are closed and there’s no mail.

Gold is giving back a few bucks of Friday’s big gains, the bid $1,923. Silver has slipped below $25 for the moment.

But if stocks are pointing to “continued economic rebound,” oil begs to differ today.

Crude has oscillated between $37–42 for more than a month now. Jim Rickards again: “Analysts point to a number of factors that could cause higher oil prices including sanctions on Iran, terrorism in Iraq and the collapse of Venezuelan output.

“Saudi Arabia or Russia could easily expand output. The U.S. could increase the areas available for fracking. Natural gas is cheap and plentiful and can substitute for oil in at least some electricity-generating facilities.

“In short, the most likely outcome for oil prices is stability with a downward bias. Oil is plentiful, despite geopolitical hotspots. A slow economic recovery from the pandemic-related recession combined with deflationary factors such as higher savings rates, slowing population growth and excessive debt loads are all headwinds for higher oil prices.”

Gee, it took The Wall Street Journal only five months to catch up with us… 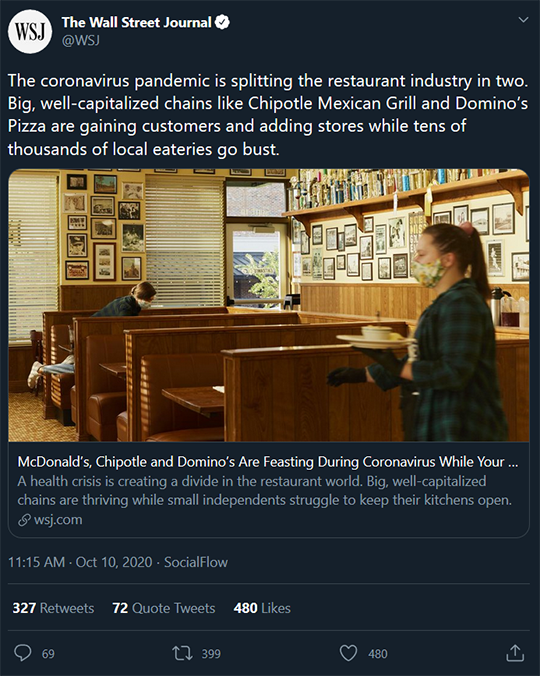 “Larger operators generally have the advantages of more capital, more leverage on lease terms, more physical space, more geographic flexibility and prior expertise with drive-thrus, carryout and delivery,” says the Journal — belaboring the obvious, but including a helpful chart… 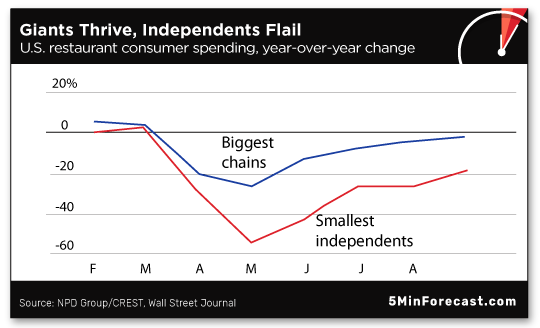 “Biggest chains,” by the way, means 250 or more locations and “smallest independents” means only one or two.

We saw it all coming last spring. Four out of five independent restaurants said they weren’t sure whether they could stay in business until a return to “normal.” Now according to Yelp, three-quarters of the nearly 22,000 restaurants that closed between March and September were those with fewer than five locations.

As we said in May, the future of the restaurant is sterile — not just in terms of sanitation, but also the charmless and cookie-cutter nature of the giant chains. Bleah…

➢ Ironically, those of us living in the boonies might be making out best in terms of diverse dining choices — simply because the chains never ventured out to the hinterlands to begin with. Where your editor lives, the only sit-down chain for 100 miles around is a single Applebee’s. Yes, we’ve suffered the loss of a few independents, but the carnage is far worse in the burbs and the big cities. How is it where you are? Drop us a line.

The rare coin market is red-hot… but for one of the rarest coins out there, it’s ice cold. 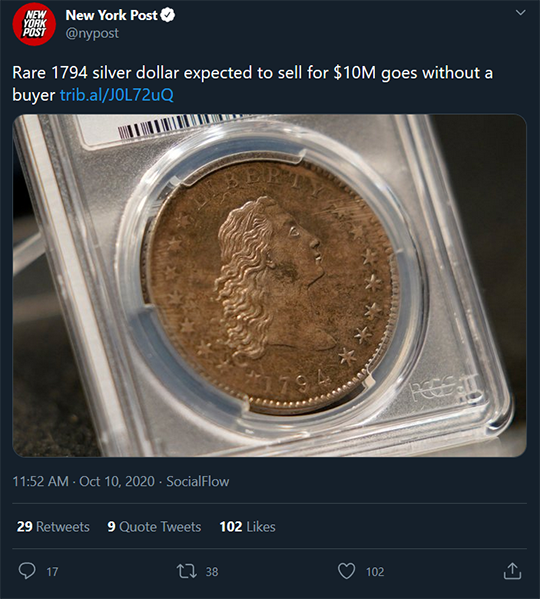 In 2013, an alert reader clued us in to the sale of a 1794 Flowing Hair Silver Dollar — one of the first 1,758 created by the U.S. Mint. By one expert estimate, fewer than 130 remain — and this particular one is believed to be the very first. It was in exceptional condition (MS-66, if you’re a coin geek).

The buyer was Bruce Morelan of Las Vegas. The price — $10 million, then a record for any coin minted anywhere at any time.

The record still stands: Morelan was looking to unload it and at least break even (before inflation, that is), but there were no takers during an auction last Thursday at the Bellagio.

Weep not for Morelan, though: He pulled in $4 million from the sale of 12 other coins.

To the mailbag: “There was a comment last week in The 5 that ‘gold as an asset class outlasts governments’ — followed slightly later with a suggestion to open a gold IRA.

“While physical gold you hold in your hand may outlast the government, the IRA won’t.

“As I understand it, under the SECURE Act passed by Congress last December, secondary IRA beneficiaries (basically anyone other than your spouse) have to empty the IRA within 10 years after receiving ownership of the assets.

“Thus, your kids won’t benefit from your foresight, and the government will probably get 37% of the profit (since they would have to sell the gold and take an IRA distribution as current income and not at the 28% ‘collectible’ capital gains rate).”

The 5: You are correct. The “stretch IRA,” as it was known, is dead and buried. We’ve covered the topic more than once — both before and after passage.

We’ve also cautioned for years that Uncle Sam reserves the authority to change the rules at any time. But that doesn’t necessarily make the IRA — in either the conventional or Roth flavors — a bad deal.

With a conventional IRA, you get an immediate above-the-line tax break — take the money and run!

As for the Roth, the advantages could take many years to kick in, depending on when you plan to start those tax-free withdrawals. And yes, the rules could easily change between now and then. We explored the potential downsides in detail over the summer to help you decide if Roths are worth the risk — whether for precious metals or any other asset class.

In the end, you might still decide they’re worth the risk. But best go in with eyes open.

P.S. Should a Biden presidency come to pass, one of the things we’ll be watching for is the “Rothification” of 401(k) accounts.

That is, the traditional 401(k) would be stripped of its pretax benefits. Or the pretax contribution limit might be capped at some preposterously low number like $2,400.

Presumably, Republicans would object. But they wouldn’t have a leg to stand on… because it was Republicans who put the idea on the table during negotiations for the 2017 tax bill.