“Is Twitter worse than Watergate?” asked Paradigm Press executive publisher Matt Insley in a group chat this morning. “Or is there some grasping at straws?”

Which comes back to another question we’ve been chewing on since Elon Musk disclosed his initial Twitter stake last spring: Can Musk really be trusted as a guardian of free speech?

On Friday night, Musk delivered — kinda-sorta — on a promise he made four days earlier: “The Twitter Files on free speech suppression soon to be published on Twitter itself.”

At issue: To what extent was Twitter’s previous management pressured by the U.S. government to censor things the government considers “hate speech” and “misinformation”?

For the moment, the answer is still frustratingly vague.

Musk took scads of internal correspondence among Twitter’s previous management and handed it to the independent journalist Matt Taibbi — the fellow who more than a decade ago gave Goldman Sachs the memorable moniker “vampire squid.”

Instead of an article on his Substack site, Taibbi posted a lengthy thread of tweets — focusing largely on Twitter’s decision to suppress the New York Post story about Hunter Biden’s laptop, three weeks before the 2020 election.

Even after it became apparent the Post story was not “Russian disinformation” and the laptop contents were authentic… Twitter’s “safety” and “trust” teams stuck to their guns and refused to lift the ban hammer.

In part, that’s because Twitter’s outside researchers were telling the firm that Democrats in the U.S. House were demanding even Twitter exercise even more censorship because “the First Amendment isn’t absolute.”

Will there be more revelations? Yes. Will they be more damning than what Taibbi has published so far? We certainly hope so.

“In particular,” writes Taibbi’s friend and former colleague Matt Bivens, “I want to hear more about the involvement of three-letter security agencies like FBI and CIA in shaping our social media, and by extension our worldviews.”

Yep. But even the limited revelations to date have brought out spitting hatred from elite media. Because they can’t deny the documents are authentic and newsworthy, they simply fling ad hominem attacks at Taibbi for daring to challenge elite narratives.

For instance, here’s Ben Collins of NBC News — whose beat is “disinformation, extremism and the internet” — saying Taibbi has squandered all his previous accomplishments in journalism. 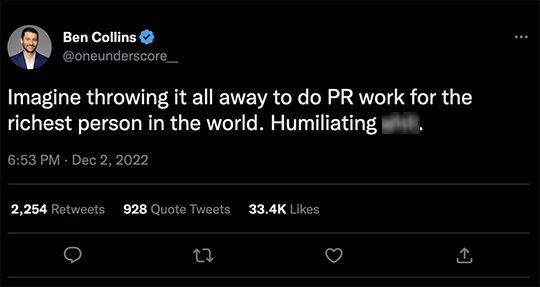 Still… we’d like to see Musk publish the raw documents for all to see, the way WikiLeaks did with the State Department cables in 2010 and the Democratic National Committee’s emails in 2016.

Otherwise, there will inevitably be questions about what Musk is holding back — and why.

And if Musk isn’t completely forthcoming… well, there are ample reasons to question his motives.

“Musk is intimately connected to the U.S. national security state, serving as one of its most important business partners,” wrote Alan MacLeod at MintPress News last spring.

For instance, one of Musk’s other companies has been awarded billions of dollars in contracts to launch spy satellites. “SpaceX has become every bit as important to the U.S. war machine as more well-known companies like Lockheed Martin and Boeing… From its origins in 2002, SpaceX has always been extremely close to the national security state, particularly the CIA.”

Meanwhile, remember when Musk made a big deal about donating thousands of Starlink satellite terminals to Ukraine shortly after Russia’s invasion last February, so Ukrainians would still have internet access? “It soon transpired that there is far more than meets the eye with Musk’s extraordinary ‘donation.’ In fact, the U.S. government quietly paid SpaceX top dollar to send their inventory to the warzone.”

And of course, there are the billions in tax credits that have benefited Tesla down through the years — a byzantine system of subsidies that MacLeod says “goes some way to explaining why Tesla is worth more by market cap than Toyota, Volkswagen, Mercedes-Benz, BMW, GM, Ford, Honda, Hyundai, Kia and Volvo put together, despite not being even a top-15 car manufacturer in terms of units sold.”

So back to the question that’s been nagging us for the last eight months: Can Musk really be trusted as a guardian of free speech?

On the one hand, he describes himself as a “free speech absolutist.” On the other, he says Twitter will comply with all laws and regulations. Can he realistically square that circle in the present day and age?

We want to know what you think: Is Musk the savior of free expression in these United States? Or is he a huge attention-getting fraud? Or is the truth somewhere in-between?

Write and let us know: feedback@5minforecast.com. We’ll share your input as the week goes on.

The oil price has been up, down and all around amid a flurry of headlines to start the week.

Yesterday, oil ministers from the OPEC+ nations agreed to stick to their previously announced production cuts — which are less than meets the eye because many member countries can’t meet their existing production targets.

This morning, Western nations’ preposterous price-cap scheme came into effect. Russian oil transported by tanker ship can’t be sold for more than $60; anything higher and Western insurers won’t cover it. Western leaders are trying to have it both ways — limit Moscow’s oil revenue while not disrupting global oil markets. There’s still an outside chance Moscow will respond by slashing oil production — which could send prices skyrocketing.

Meanwhile, it appears the Chinese government is dialing back its zero-COVID policy — or at least allowing local leaders to make that call in some cases. Any meaningful reopening of China — if that’s what’s happening — will boost Chinese oil demand.

Amid all these cross-currents, oil prices popped when a new week’s trading began last night. But as we check our screens this morning, a barrel of West Texas Intermediate has fallen back to $79.98 — about the same as it was two weeks ago.

Where do energy prices go from here? For all the short-term noise, Paradigm’s macro maven Jim Rickards says it comes down to two things — the weather and the war in Ukraine.

“Contrary to the claims of climate alarmists and supporters of the Green New Scam,” says Jim, “the primary determinant of weather in Europe this winter will be the jet stream. It is moving into a meridional flow, basically wobbly in contrast to the more normal jet flow stream, which is straight with slight waves. This means arctic air will flow south in Europe unimpeded by the jet stream. It will bring very cold temperatures with it.

“European demand for oil and gas will soar as will prices. Germany will encounter shortages and will have to ration available supplies and shut down manufacturing to preserve natural gas supplies for home heating.”

And what happens in Europe won’t stay in Europe: “U.S. natural gas supplies will be diverted to Europe to alleviate shortages. This means shortages will emerge in the U.S. and natural gas prices will surge here also.”

“Russia will incorporate all of this territory into the Russian Federation and will likely move further into Moldova to reunite with a pro-Russian corridor called Transnistria with its capital in Tiraspol. At that point, Russian strategic objectives will be complete.”

Even if Russia does not achieve those ambitious objectives by spring, the winter offensive will catch many Western leaders and analysts by surprise. (Much more about this from Jim coming in tomorrow’s edition.)

Bottom line: “This one-two punch of cold weather and a winter offensive to finish off Ukraine will drive oil and natural gas back to their spring and summer highs.”

Apart from the volatility in oil, nearly every asset class is starting the new week on the wrong foot.

The proximate event for the sell-off is another “authorized leak” from the Federal Reserve through its favorite reporter, The Wall Street Journal’s Nick Timiraos: A story out this morning reaffirms plans for a half-percentage point increase in the fed funds rate next week… “but elevated wage pressures could lead them to continue lifting it to higher levels than investors currently expect.”

Gee, what were we saying last Friday? And the day before?

To the mailbag: After we wondered in passing whether government workers should be allowed to unionize, a reader goes a step further.

“My father had this radical idea that has always made sense to me. ‘No government employee has the right to vote.’

“It is inherently a conflict of interest, the proverbial ‘fox guarding the henhouse.’ On the surface it may sound unfair. However, if you let it roll around for a while it makes more and more sense. Unpopular, sure, but a 37% market share when it comes to owning democracy seems a steep price to pay for myriad reasons.

“Do you think the Harvard Business School model is responsible for wiping out the middle class in America?

“Has unconscionable pursuit of bigger bottom line effected a massive transfer of money from worker to investor/elite?

The hollowing out of the middle class can be traced to the advent of the pure-fiat dollar in 1971, with zero gold backing.

With the end of a half-baked version of the gold standard, we got instead what James Grant of Grant’s Interest Rate Observer calls “the Ph.D. standard.” And while that definitely came out of academia, it didn’t particularly come out of HBS.

(If you really want to trace it to one institution, it would probably be the University of Chicago. The late Milton Friedman was a free-market guy, opposed to price controls — except when it came to the most important price of all, the price of money. Interest rates, to his mind, had to be put in the hands of monetary mandarins.)

The Ph.D. standard fueled the “financialization” of the U.S. economy, a something-for-nothing mentality in which resourceful people could generate scads of “wealth” without growing, mining or manufacturing anything.

Exploiting those circumstances is what Harvard Business School refined to perfection.