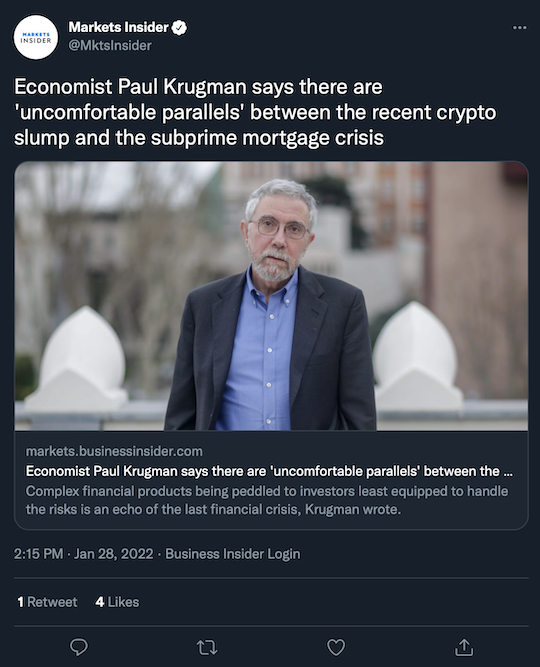 Paul Krugman’s column is the latest venue for the establishment media to engage in concern trolling about folks dabbling in cryptocurrency.

Discussing the recent $1 trillion drop in the crypto space’s market cap, Krugman wrings his hands thus: “Who is being hurt by this crash, and what might it do to the economy? Well, I’m seeing uncomfortable parallels with the subprime crisis of the 2000s.”

Not that crypto would trigger a wider economic crisis, he says, but rather that the working-class folks who took the crypto plunge would be the ones hurt most — much as the working class was suckered into subprime mortgages.

Wiser heads on financial Twitter were quick to point out Krugman’s infamous prediction about the internet in 1998: “By 2005 or so, it will become clear that the internet’s impact on the economy has been no greater than the fax machine’s.”

In fact, as we’ve pointed out before, the much better analogy to crypto in the present moment is… well, the internet in 1998.

Yes, you could have easily lost your shirt on Lycos or AltaVista or pets.com. But that did not mean search engines and online retail weren’t the wave of the future.

Reminder: Our crypto evangelist James Altucher says 90% of the cryptos out there are ill-conceived… or a joke… or a fraud… or some combination thereof.

And as he said here last week, 2022 might well turn out to be the year crypto reaches mass adoption — “just like when the internet started to be used for real-world commerce in the mid-’90s rather than just being a big digital billboard for other people surfing the internet.”

Still, there’s a caveat: Because James would be the first to tell you right now there’s a rather circular quality to the explosion in crypto activity.

Yes, hundreds of millions of dollars in transactions take place on crypto every day now — compared with next to nothing only four years ago.

However… “Right now the biggest crypto exchanges mostly just trade… crypto. Crypto is being used for crypto things. If crypto were to disappear, the main thing that would be affected would be crypto!”

So 2022 will be the test, especially in the DeFi, or decentralized finance, space: “We can theoretically trade stocks (or anything, for that matter) on the DeFi exchanges,” says James.

“I want to see McDonald’s and Exxon traded on DeFi exchanges. We MUST see crypto start to bleed into the real world.”

Identifying the cryptos that can make this future happen — and make a fortune for their investors in the process — is the purpose of James’ high-end crypto research.

For only a few more hours, we’re applying a $512 credit to your account — which you can put toward a membership in James’ Early-Stage Crypto Investor.

Click here now to take advantage, because the offer comes off the table at midnight tonight.

On the heels of last week’s stock-market roller coaster, tech shares are leading the way higher this morning.

The steep sell-off and then extraordinary reversal a week ago today strikes our Alan Knuckman as very promising — but there’s still damage to repair. “The S&P has to get above the 4,500 midpoint of this drop from the top,” he explained in a video briefing to subscribers of The Profit Wire. “And the VIX has to get below 26.50 after doubling in a week.”

This helps: The upside to lower share prices at the moment is a more attractive price-earnings ratio. “The P/E ratio is coming down, because earnings continue to be super strong. So that means stocks are cheaper in relative terms.”

“One of my friends texted me the other day,” says our income-investing pro Zach Scheidt. “He said, ‘I’m just going to sit this one out and get back into the market later.’”

Perhaps that makes sense with speculative tech stocks. “But if you’re a long-term investor in quality stocks like my friend, ‘sitting this one out’ is one of the worst decisions you can make.”

Maybe more important is this: How will you know when to get back in?

“If you’re out of the market because things are uncertain and you decide to get back in when things become more certain, you’re again buying high and selling low.

“But if the market trades lower from here, it’s going to be even more difficult to convince yourself to buy back in when things look even worse.

Yes, you want to employ smart risk management and avoid losing a bundle during a pullback.

“But I’ve found that the way to do this,” Zach says, “is to invest in companies that sell real products and services… that generate reliable profits… and to buy stocks that trade at reasonable prices compared with profits.

“If you do this, you’ll be able to ride out a market pullback with confidence. Because stocks of stable companies hold much more of their value when stocks pull back. And they steadily rebound when the market turns back around as well.”

Good news: It appears the feds are walking back their plans to make taxpayers use facial-recognition software to verify their identity when dealing with the IRS online.

No sooner did we sound the alarm on Thursday than the Treasury Department said Friday that uploading a selfie into a database controlled by the firm ID.me is only one of many alternatives it’s considering.

Ms. LaManna is a skilled spin artist — using the ID.me trial balloon to beg for more funding from Congress. She said the only reason the IRS was looking to outsource identity verification to a contractor is “the lack of funding for IRS modernization.”

Hmmm… Maybe that was the whole point of this exercise?

For the record: Establishment media are no longer ignoring the trucker convoy in Canada, seeing as it’s tied up the capital Ottawa in knots.

Seriously, check out the drone footage…

Police are asking the public to avoid downtown today. Gee, ya think?

The BBC is as good an outlet as any to snag as a representative sample. Its article yesterday was refreshing in laying out what’s at stake — beyond the demand to lift the vaccine mandate applying to truckers crossing the U.S.-Canadian border.

“Prices are on the rise, including for food and petrol,” it says. “It’s been getting harder to find some products on grocery store shelves — and Canada’s economy is heavily dependent on the men and women who drive the vast majority of food and goods consumed in the country across the border.

The piece quotes a business prof from the University of Toronto who studies issues connected with the border: “Everything that Canadians depend on — food, clothing, electronics — everything arrives” via truck. For his part, he’s “wary” of the mandate as “there’s a real threat of unintended consequences.”

Indeed. As one trucker says: “We are staying here until we can go back to work.”

With that, a reader has a nit to pick about our mention of the convoy here on Friday…

“You stated that no ‘corporate media outlet’ has covered the story.

“Fox News Channel is certainly not a part of the MSM, but it’s still part of a large media corporation. Fox — or at least Tucker Carlson — featured the convoy and interviewed participants this last Thursday and Friday.”

The 5: So noted. But Fox is playing to an audience that’s by and large sympathetic to the cause.

CNN, NBC, The New York Times and so on appeared to studiously ignore it until it was simply too big to ignore.

Then the coverage shifted to sniffing at how it’s “divisive.” The Washington Post ran a column declaring, “The movement shares an affinity with Trumpist toxic authoritarianist politics.” Canada’s state-run CBC — which has become as insufferably “woke” as NPR these days — had a panelist who speculated “Russian actors” had a hand in organizing it.

What was it Gandhi said about, “First they ignore you…”?

[As for why we ignored it until late last week, well, there are myriad reasons a particular topic doesn’t make the cut in The 5 on a given day. Too, we were conscious of how a wide-scale mandate protest in the United States, scheduled for the week of Veterans Day last year, fell totally flat. But once Elon Musk piped up, we knew we had a unique angle to pursue.]

“I read with great interest your item about Hayden Adams at Uniswap and his bank account being closed,” a reader writes.

“I too had a similar incident with a local branch of a regional bank. Long story short, I was erroneously mentioned alongside a local crime story. No matter that charges against me were dropped. My bank (and brokerage) decided to terminate my account. So much for the Land of the Free.

“My question: How do guys like Hayden & myself go on with their financial life? If financial institutions won’t accept your business, how do I deposit paychecks, pay bills, etc.? I’d love to hear advice from Jim Rickards or anyone else in the know. I could sure sleep better with a resolution.”

The 5: We’ll put in an inquiry with Jim and get back with you.

In all likelihood, the banks are being over scrupulous in applying AML-KYC. That’s short for “anti-money laundering” and “know your customer” regulations.

It happens now and then — particularly at times the banks feel the regulatory heat might be on and they want to look “extra” compliant. We’ve chronicled similar spates of caution as far back as 2013.

Last, an NFT inquiry from a Financial Reserve member…

“So I have a question. Someone generates an NFT, say of a bored ape in yachting attire, and sells it for a six-figure sum. The proud owner now gets to use it and own it.

“But what is to keep someone from taking that image, changing one pixel, such that the human eye can discern no difference, and selling that near-clone as another NFT? And then repeating the process 100 times or more? True the original is still just that, but the others are so similar as to be indistinguishable. Would that not tend to devalue the original?

“I’m new to all this, and not inclined to invest, but I do like to learn.”

The 5: We sent this one along to our resident crypto geek Chris Campbell — senior analyst for James Altucher — and he turned it into an entire issue of our sister e-letter Altucher Confidential. Read and enjoy.